A revised Mining Act passed parliament last year, despite several Government backbenchers crossing the floor to oppose it on the grounds that it did not provide enough protection for farmers’ property rights.

At the time, Mining Minister Dan van Holst Pellekaan confirmed his “commitment to commence the next phase of consultation… to determine further improvement for all parties”.

This also prompted crossbench MP Geoff Brock to draft his own Bill, allowing for an independent commission of inquiry into land access regimes under the Government’s legislation.

However, Brock’s Bill has stagnated on the notice paper – it lapsed when parliament was prorogued last year and was reintroduced last month, before parliamentary sittings were curtailed as the House sought to impose social distancing in response to the COVID-19 pandemic.

It’s understood that at a meeting of state Liberal MPs on Monday night, van Holst Pellekaan sought to “kill off” Brock’s Bill by bringing it forward to be defeated along party lines.

However, InDaily has been told that proposition was opposed by some in the party-room, given opponents of the current Mining Act were not allowed into the chamber to register their dissent.

One described the Government’s move as an “opportunistic attempt to try and suppress debate”.

“It shows a lack of judgement on the part of the minister, to believe somehow we’ve forgotten about this issue,” said one MP, who did not want to be identified.

“It’s important to our electors, having suffered so much, so to think that we’d just roll over on it now just proves his tin ear and inability to engage.”

InDaily has been told the matter was resolved “on the basis [that the argument] is akin to a conscience matter, and thus couldn’t be brought before a parliament that’s been thinned out to achieve social distancing”.

It’s understood at least three MPs reserved their rights as to how they would vote when the Bill does come before parliament. 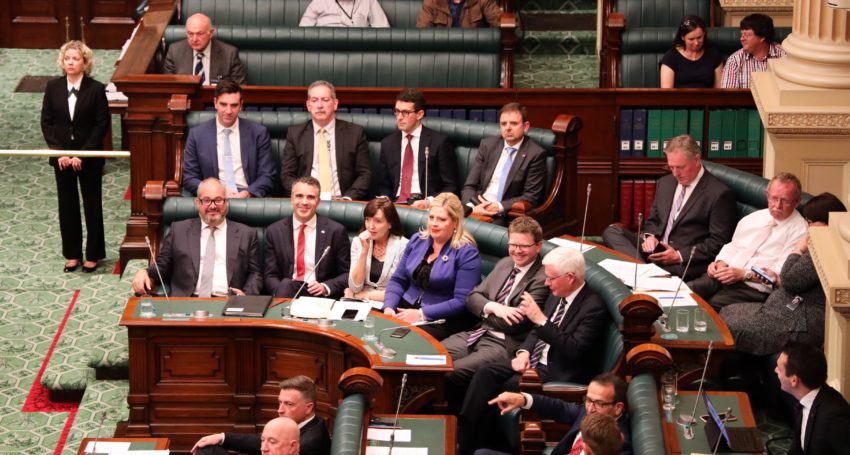 Liberal MPs (back row) voting with Labor and crossbenchers to defeat a Government motion on mining in 2018.

InDaily understands first-term Liberal backbencher Fraser Ellis – who led the initial revolt against the Mining Bill in 2018 – is looking to introduce his own amendments to the existing legislation.

Ellis would not comment on whether that was the case, but told InDaily: “My position is the same – I’m sympathetic towards an independent review of the Mining Act.”

“My farming constituents don’t trust the Mining Department to conduct a review into the future of their business with their best interests in mind,” he added.

In a statement, van Holst Pellekaan told InDaily Brock’s Bill would be “debated in line with the standard procedure of State Parliament”.

“The Act also increases penalties for mining companies that breach the law and provides for better enforcement.

“The State Government is already conducting further consultation to assess what other improvements can be delivered for both landowners and the resources sector.”

But another insider argued: “Most of us aren’t really sure how much has been done on that.”

The MP said the issue “is not going away”.

“The country rump of the Liberal Party haven’t thrown in the towel on that – we’re never going to give in… there’s a steely resolve for a number of us to make sure we get some sense of fair play,” they said.

“We weren’t happy with the way farmers’ rights were being trampled in here [and] nothing’s really changed.”

That was echoed by another colleague, who said: “It’s a mistake to assume this battle is finished or finalised.”

But another MP suggested opponents of the Government’s Mining policy were using Brock’s Bill “to keep the pressure on the Mining Minister to continue with the consultation process”.

Brock’s Bill now seems likely to languish on the notice paper again without progressing to a vote – but in the meantime keeping the issue alive.

For his part, Brock said he was “quite frankly disappointed they keep deferring it”.

“They’ll keep pushing it down the notice paper – which is not very democratic, quite frankly,” he said.

Brock argues there is “no reason” why parliament can’t resume with a full complement of MPs, utilising the public galleries to allow for social distancing – and allowing for a resumption of conscience matters.