Three MPs were absent for the vote that stunned state parliament yesterday, when legislation sponsored by Greens MLC Tammy Franks was decisively shot down in the House of Assembly.

Adding insult to the injury, it failed even to pass the second reading vote, meaning it was killed off without detailed debate or the chance for amendment. 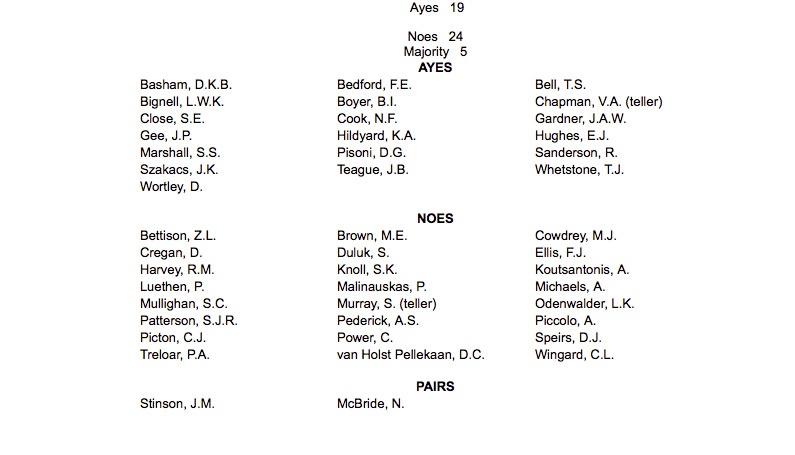 Of the 24 MPs who voted against it in a conscience vote – which is not governed by party lines – nine were from the ALP, all hailing from the party’s Right faction, Labor Unity.

Bitterly disappointing to see so many Labor MPs vote against working rights for sex workers, especially in contrast with the wonderful work our NT comrades are doing in government on this in the top end. Shame #saparli #decrimsa pic.twitter.com/CjXXxcclLh

Several factional insiders have pointed to the fact that two of their number, Dana Wortley and Jon Gee, voted for the legislation to progress as evidence the faction did not strong-arm members to kill the Bill.

Wortley said she was happy for the issue to proceed to further debate, while InDaily was unable to contact Gee this morning.

Their Labor Unity colleagues also argue that first-term frontbencher Jayne Stinson intended to vote ‘Yes’, but was absent in a pairing arrangement with Liberal Nick McBride, a conservative-aligned Liberal backbencher from the south-east.

But mystery surrounds the pairing arrangement – including by whom it was instigated.

InDaily yesterday asked Stinson by SMS how she had intended to vote, with the MP sending a photograph of the pair sheet, which records her as a ‘Yes’, by way of reply.

McBride last night told InDaily he “was approached by Jayne” to take part in the pair.

A pair is an arrangement that allows MPs with pressing business, usually of a personal nature, to be absent from parliament, with a member of the opposite side absenting themselves from divisions to cancel out their lost vote.

Interestingly, Labor has been refusing to grant them to Government MPs during the current term of parliament.

But in this case, both MPs were present in the chamber throughout the sitting day.

In fact, footage from parliament’s video stream shows Stinson absenting herself from the chamber (right of screen), just as Attorney-General Vickie Chapman rises to introduce the sex work vote.

Subsequent footage shows her returning for the very next vote, minutes later (via right hand door).

“She didn’t want to be seen in the chamber in that vote,” one source told InDaily.

Franks said Stinson “got up and walked out of the chamber when Vickie started speaking”.

“There was no reason for them to have a pair – they were both in the chamber, and they both left the chamber,” she said.

“If she was really a Yes, why didn’t she go and vote Yes?”

But Stinson was less than happy to be lumped in with her factional colleagues as a ‘No’ vote, taking Franks to task on social media for suggesting she had opposed the Bill, and pointing to the Pair Sheet as evidence. 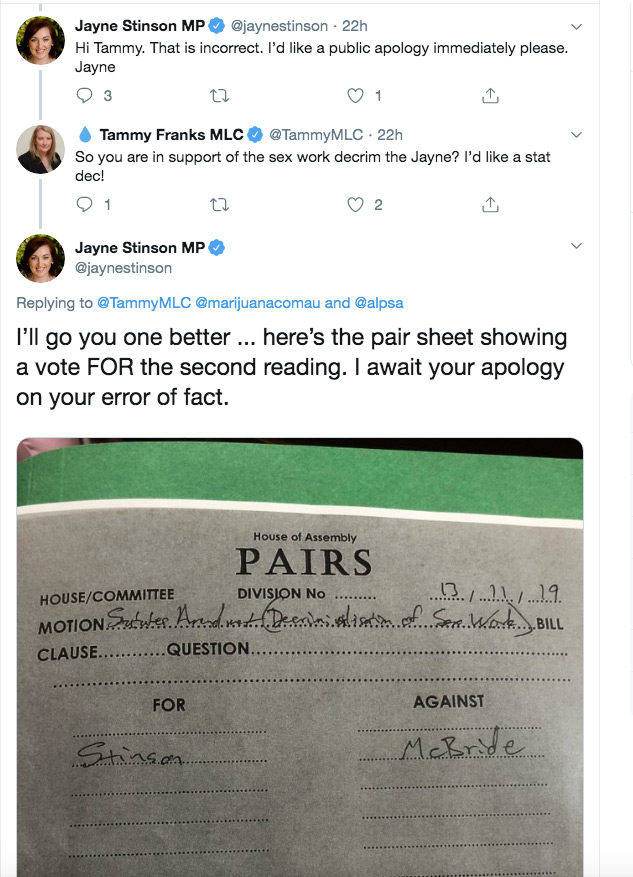 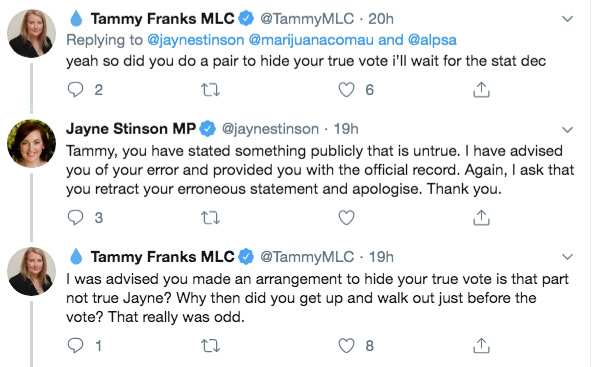 InDaily understands McBride, who was recorded as a No, approached a group of bystanders in the members’ gallery just before the division and announced that he had gone into a pairing arrangement with the Labor MP.

InDaily has been told he said Stinson would be recorded as a ‘Yes’ vote, while he would be a ‘No’, although that did not necessarily reflect the way they would have voted if they had remained in the chamber.

InDaily has sighted a text message exchange in which Franks informs McBride during the division that the vote appears lost, to which the Liberal responds that it is “disappointing”.

“Even if I dragged Jayne over… my vote would not have changed anything,” he writes.

McBride did not return calls today.

Liberal insiders told InDaily he was non-committal about his vote, with one suggesting he was “vacillating”.

Labor whip Michael Brown said he was not involved in the deal, saying “the pairing arrangements were done privately between members”.

“I was aware if it, but I understand it was an arrangement between them,” he said.

“I had a conversation with Nick about [the fact] that he was going to have pair with Jayne… it’s not common practice but it does happen.

“They might have particular reasons for not wanting to actually be in the chamber… sometimes people feel they have given some commitments [to people], it does happen – I’ve seen it happen before.”

Another source said “a few voted against because they’re worried about their seats”, while “some people are very nervous that the faction doesn’t like it”.

Stinson did not answer calls today, but responded to a series of questions via SMS, including:

What was the reason for the pair arrangement for yesterday’s sex work division?

Who instigated the pair?

If you had been present in the chamber, how would you have voted, and why?

She replied: “I agreed to a pair in relation to the vote for Second Reading. A yes vote was sought to balance a no. I am the yes vote, as recorded on the official pair sheet.”

InDaily sought to clarify whether Stinson – or a Labor MP on her behalf – sought the pair.

She replied: “As I said, I am the yes vote, as reflected on the official pair sheet. I did not seek the pair. Thanks for checking.”

She did not respond to repeated questions about whether she supports the legislation or had intended to vote in favour of it.

Stinson holds the southern suburbs seat of Badcoe, which was previously Ashford.

Ashford was previously held by Left-winger Steph Key, a long-time champion of sex work decriminalisation, who was present in the gallery for yesterday’s vote.

There was one other no-show yesterday: independent Geoff Brock missed the crucial vote, because he was stuck in the bathroom.

“I was on the toilet,” he sheepishly confirmed.

However, it was a fortuitous call of nature, given “I’m very confused about both sides [and] the more information I’m getting, the more I don’t have enough information to go either way.”

In the end though, the three votes would not have been enough to save the Bill in any case.