Prominent Liberals have put much of the party’s electoral woe in recent decades down to the decision of successive electoral boundaries commissions not to recognise the primacy of the erstwhile “fairness clause” in the Constitution Act, which held that the party that received more than 50 per cent of the statewide vote should generally form government.

The Liberals, however, failed to do so in four of the past five elections, despite winning the two-party-vote in all but the 2006 “Rannslide” poll, with many of their votes “parked” in safe rural seats.

The last boundaries commission was convinced that the fairness clause had been incorrectly applied in previous distributions, with the Supreme Court upholding a radical redistribution that undoubtedly helped the Liberals end their wilderness sojourn at the 2018 election.

But Labor, with crossbench support, managed to remove the fairness clause from the Constitution Act in the final hours of sitting before parliament was dissolved for the election, with new Attorney-General Vickie Chapman subsequently confirming there would be no legal challenge to its removal.

“The matter is now under consideration by the Liberal Party to make a recommendation to us in relation to any restoration or [further] reform,” she told InDaily in July last year.

It’s understood at a biannual joint Liberal party-room meeting earlier this year, several MPs – including lawyer Josh Teague, who represented the party at the boundaries commission and former state president Steve Murray – argued at length for the Government to revisit the legislation, with a view to reinstate the fairness clause or a similar measure.

However, insiders have told InDaily Chapman did not accept the need for further reform.

But the matter is set for another showdown at next week’s follow-up “love-in” at the Barossa Weintal, with an agenda for the two-day gathering allocating 15 minutes for Chapman to deliver an “electoral reform overview”.

Chapman is currently on leave and was not available for comment.

But several MPs have told InDaily they intend to push for the Government to revisit the Constitution Act before the next boundaries commission – to be chaired by Justice Trish Kelly – convenes later this year or early next.

“Many people were disappointed at Labor’s actions [in removing the Fairness clause], and many of us in our own party would like this to be revisited – why it’s not I don’t know,” one said, adding “we were most disappointed” when the last push to reinstate the clause was shot down by the party’s leadership.

“There’s a group of us that would like to legislate ‘fairness’ back in,” said another.

There are concerns among MPs in vulnerable seats that whatever the outcome of the forthcoming redistribution, Labor would again be able to challenge the methodology in the Supreme Court, which without the fairness clause could be obliged to effectively undo many of the changes made by the previous boundaries commission.

“There needs to be some sort of anti-gerrymander provision,” said one MP.

“There’s nothing constitutionally to prevent an absolute gerrymander being set up.”

Insiders insist that the matter would “no doubt” be raised as a matter of urgency at the love-in, which is already set up for a fiery showdown on land tax aggregation.

The agenda also includes an update from Premier Steven Marshall’s office on staff, policy and communications, a “ministerial presentation” from frontbencher Stephan Knoll on “Infrastructure, Local Projects, Public Transport, Service SA and Planning” and a report from the party’s “Marginal Seat Committee” by first-term MPs Matt Cowdrey and Richard Harvey.

There will also be a report on “campaign activities” by around half a dozen first-term MPs.

Electoral fairness was recently put back on the public agenda by lawyer Morry Bailes in a column for InDaily, in which he emphasised that the clause was “at the heart of the decision of the Full Court, as a point of statutory interpretation”.

Days later Bailes was elected as a vice-president of the Liberal Party, with a seat on its state executive.

He told InDaily today the removal of the clause from the Act was “death of night stuff by the former Labor government, and complicit were a number of crossbench members of the legislative council”.

“It was snuck through, and leaves the present government with a dilemma,” he said.

“It’s concerning. If you’re going to make such a fundamental change to what’s effectively our constitution, you shouldn’t do it in such a surreptitious way – that’s what concerns me.

“A very important part of the decision by the Supreme Court was the finding that the fairness clause had primacy, and the methodology adopted by previous boundaries commissions was flawed because they had not given proper consideration to the impact of the fairness clause – but having it out opens it back up again.” 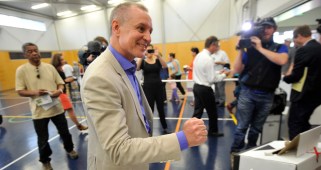 SA's electoral fairness clause a "failure", says the man who drafted it

He said there was no telling how the next commission would interpret the boundaries now, arguing “really we’re stepping into the unknown”.

“I’m not privy to decisions of the party room of the parliamentary party [but] it behoves the parliament to think about it… for the benefit of SA, the issue should be talked about, given the manner in which it was repealed.”

Former deputy Liberal leader Mitch Williams, who has been a vocal critic of successive boundaries commissions, said the party should “absolutely” restore the fairness clause “at a very minimum”.

“If we get an adverse set of boundaries given to us – and going on past history that’s the most likely scenario – we’ve got no legal redress to go back and say ‘this is unfair’,” he said.