A new shake-up of the process that determines how to spend the State Government’s advertising budget will see decision-making handed to three of Steven Marshall’s most senior advisers, on a committee chaired by Lucas that he concedes will have “a political flavour”.

“Ultimately, you need to have somebody who takes responsibility for these sorts of things,” he said.

PCAG was formerly chaired by a bureaucrat, the Premier’s department’s Communications director Jehad Ali, who remains a member of the new committee.

There will also be another bureaucrat, who is “appointed by the Chair”.

“If you’ve got a politician who’s chairing it then, as with any decision of government, there’s a political flavour to the decisions,” Lucas told InDaily.

But, he insists, “the political flavour is that we want to keep premiers and ministers out of [government advertising] and reduce the amount of money being spent”.

Any taxpayer funding for advertising “needs to be value for money, helping grow the economy and create jobs”, he said.

New guidelines published this week stipulate that the GCAC “maintains operational responsibility for reviewing and approving government communications, marketing and sponsorship activities to ensure a planned, coordinated and strategic approach to the Government’s communications strategies and programs”.

Chief executives will be responsible for approving spending below $50,000, while the committee will have oversight of advertising between $50,000 and $200,000 while delegating authority to departmental heads and the responsible minister.

Under post-election guidelines, public money cannot be spent on ads featuring party propaganda, including where “a politician’s voice or image is included” – a constant bugbear of the Liberal Opposition under the Rann and Weatherill eras.

But Lucas insists giving a politician oversight of the spending approval adds accountability to the process, saying he held the equivalent role when last in government two decades ago.

“We’re trying to cut down on ministers and premiers having their photos in government-paid advertising,” he said.

“Ultimately, rightly, governments are held to account in relation to money being spent on taxpayer-funded government advertising [and] we made clear commitments in relation to trying to reduce the extent and level of it, and keeping politicians, including premiers and ministers, out of TV and radio commercials…

“It’s not unreasonable that there be some political decision-making.”

He said while the advertising spend was “not a significant component of a $22 billion [budget] expenditure” it was “a significant potential irritant” for taxpayers when they see political-flavoured government advertising.

Under Labor, media advisers or former spin doctors including Paul Flanagan, Rik Morris and Chris Burford sat on the PCAG, but Lucas said decisions were clearly “going back via Rann or Weatherill”. 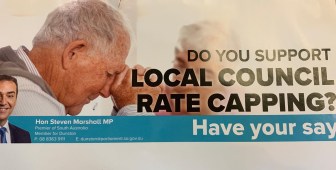 He said the second bureaucrat on the committee would come from Renewal SA, as “we were essentially looking for somebody who was in an agency that was not a central agency, who had to sit with the sort of controls imposed and could speak from an agency viewpoint”.

“We don’t discount the importance of government advertising, both for good and for bad,” he said.

“It can cause grief for governments and generate public opprobrium if it’s handled badly, and having appropriate oversight of strict controls for getting value for taxpayer-funded government advertising, we think is a good thing.”