Just yesterday, Farrell told InDaily: “I intend to nominate and put myself forward for the shadow ministry and the senate deputy leadership.”

However, this morning he bowed to immense pressure within the party – including from new leader Anthony Albanese – and stood aside, confirming: “I have withdrawn my nomination as deputy leader.”

He will remain in the shadow cabinet, which will see the status quo in terms of SA representation, with Senate leader Penny Wong, her fellow Left-faction powerbroker Mark Butler and Right-winger Amanda Rishworth continuing on the frontbench under Albanese.

The new leader today paid tribute to Farrell, thanking him for “putting aside his own personal interests for the interests of our great party, as he has always done”.

It’s the third time Farrell – long one of the ‘Labor Unity’ Right faction’s most influential figures in SA – has been forced into a public political retreat by his party’s opposing Left faction.

He bowed to pressure in 2012 to relinquish the Number One spot on Labor’s SA senate ticket for Penny Wong, only to subsequently lose his seat.

A year later, an infamous attempt to parachute into state parliament was shot down by then-Premier Jay Weatherill, who threatened to quit as leader if Farrell won party endorsement.

Albanese said Farrell would “remain a valued member of my shadow cabinet and he will have a senior role”.

“Don Farrell is well-liked by his colleagues,” he told reporters in Canberra.

“He is respected by me and by all of our team. That respect goes up even more today.”

Members of Farrell’s faction defended him today, amid social media criticism of his earlier stance to dig in on his role in Labor’s four-person leadership team – which will now consist of two men in the House of Representatives and two women in the Senate.

Recently-retired Adelaide MP Kate Ellis took to twitter to argue that “few have played a bigger or longer role in uniting our party than Don Farrell”.

“Few have made as many repeated personal sacrifices,” she wrote.

“Few have taken such risks to support young women into parliament. But what would I know, clearly Twitter knows better.”

Few have played a bigger or longer role in uniting our party than Don Farrell. Few have made as many repeated personal sacrifices. Few have taken such risks to support young women into parliament. But what would I know, clearly twitter knows better

A Right-wing colleague of Farrell’s, who did not wish to be named, told InDaily: “What people don’t realise about Don is that he does have a sense of duty to the party generally.”

Farrell backed out despite being confident he had the numbers, and publicly stating his intent to contest the deputy leadership.

“I think his view is he made his point politically, but then doesn’t want to hurt the party in any way either,” the insider said.

Albanese will allocate portfolios on the weekend, after the caucus gathered today to pick 30 members for the shadow ministry.

Queensland MP Jim Chalmers, who had considered a tilt at the leadership, is tipped to move from finance to the treasury portfolio.

He wouldn’t discuss publicly what portfolios he has talked about with Albanese but said he was keen to play a prominent role.

“I think it’s important that Queensland has a prominent say in the alternative government,” he told reporters at Parliament House.

Albanese yesterday won the first test of his authority when shadow minister Ed Husic stepped aside to give the high-profile Keneally, who had been on the outer within her own faction, the chance to sit on the opposition frontbench.

The leader had insisted Keneally become a shadow ministry member, against the will of some of her NSW Right faction colleagues who wanted Husic to stay on.

Husic said while he had loved being a shadow minister he would not run again so the party could ensure “someone of Kristina’s enormous talents” was able to make a frontline contribution.

“One of the challenges that we have in the Labor Party is that we’ve got too much talent to cram into 30 positions and so there are hard decisions that are made right throughout the party,” he said.

“There are people in our team who might not get a go today who would easily be more talented than the team that Scott Morrison announced earlier in the week.”

The shadow cabinet and outer ministry is selected along factional lines, with 16 members coming from the Right and 14 from the Left.

Factionally unaligned Canberra-based MP Andrew Leigh, who was previously shadow assistant treasurer, will be a victim of the faction system and won’t return to the frontbench.

Bill Shorten, who led the party for six years and opposed Albanese’s elevation to the leadership, is understood to be seeking the disabilities portfolio.

Albanese said he would treat the former leader with the “appropriate respect”.

“I have no doubt that the team that we assemble will be balanced … in terms of gender, in terms of state representation and I expect that it will be a very good team who will hold the government to account,”m he said. 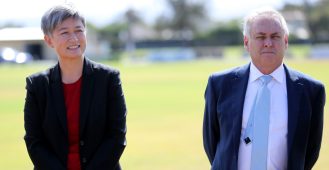 Victorian senator Kim Carr’s decision not to seek a shadow cabinet post opens another vacancy for Albanese to fill.

Labor, meanwhile, is growing confident of holding the NSW seat of Macquarie as counting continues following the federal election.

Prime Minister Scott Morrison’s Coalition team is leading in 77 seats, with Labor ahead in 68.

Six crossbenchers are also set to win seats in the 151-seat lower house.