Questions were asked in December 2017 – amid the national parliamentary citizenship scandal – about his British heritage, with the MP providing documentation to show he had submitted a renunciation application to the Home Office that was received in September 2007, more than two months before the November 24 poll.

It was reported at the time that his renunciation was later confirmed by the Home Office in a 2017 letter.

But that letter, which is published on the AEC website as an addendum to the pro forma candidate checklist, shows that “the effective date of [Champion’s] renunciation of British citizenship was 28 November 2007” – four days after he won his seat. 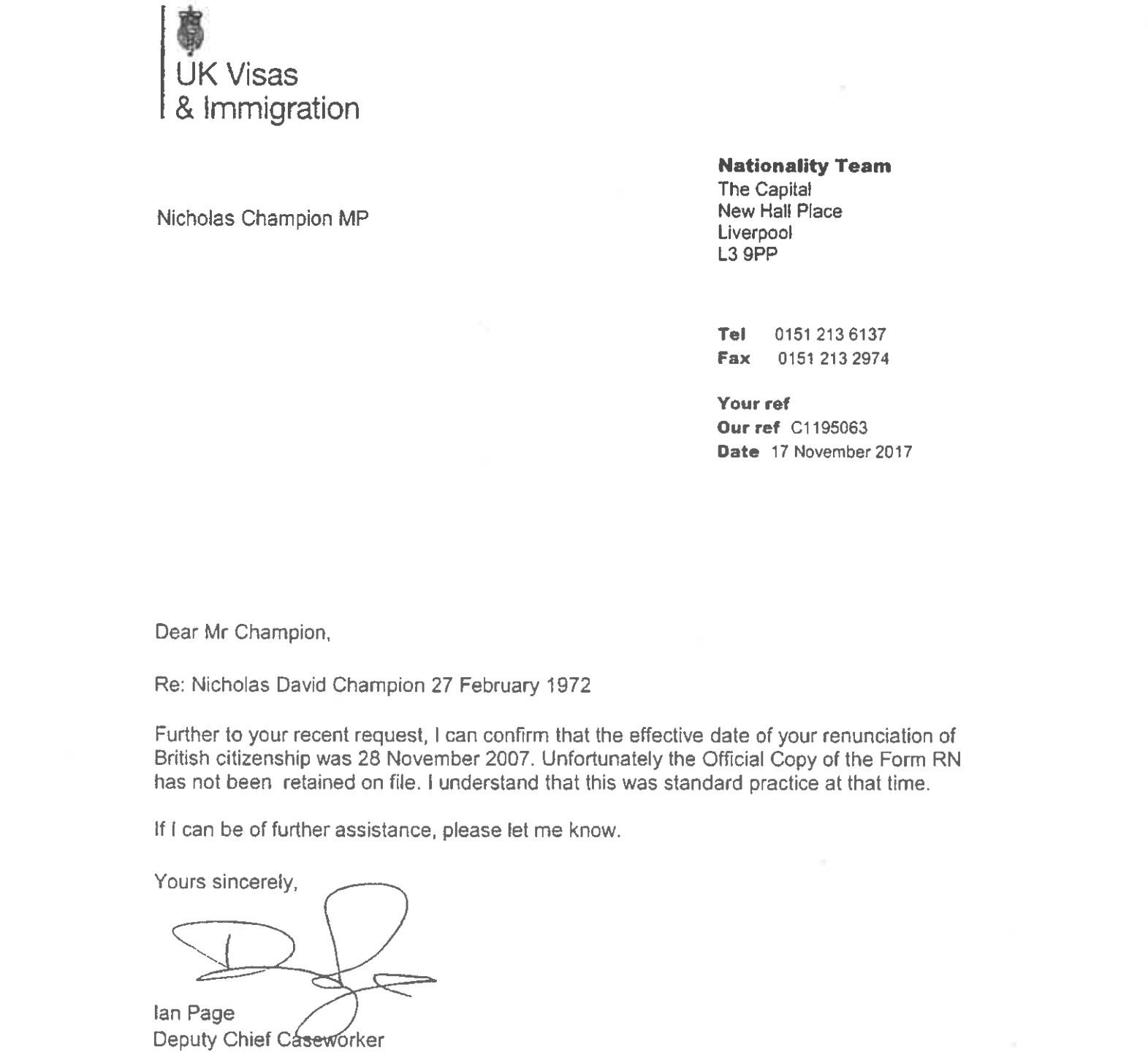 Asked whether he may have been invalidly elected, Champion told InDaily: “Well, High Court judgements aren’t retrospective [but] if the High Court challenge had been taken at that time I suppose I would have.”

However, he went on to point out that “there’s a sort of period where these things can be challenged, and it wasn’t challenged [so] therefore I was eligible”.

Alleged breaches of Section 44 of the Australian Constitution must be referred to and determined by the High Court, and no party challenged Champion’s election at any point during his first term.

There is no question about his current eligibility, as he was subsequently re-elected three times, in 2010, 2013 and 2016.

He is currently standing in the new seat of Spence, after Wakefield was effectively abolished in a recent federal redistribution. His nominal margin is 17.2 per cent.

Champion said the question of his eligibility during his three-year first term “would have come down, I guess, to [that fact that] I’d paid my fee and put in my form some time earlier, but the Home Office didn’t process it”.

However, that is the very same scenario that saw Centre Alliance MP for Mayo Rebekha Sharkie forced to quit parliament during her first term, after her renunciation documents sent in April 2016 were not processed by the Home Office until late June – after writs had been issued for the July 2 election.

Sharkie – along with Labor MPs Justine Keay, Josh Wilson and Susan Lamb – resigned a year ago today after a High Court ruling on ALP senator Katy Gallagher, who was deemed ineligible despite claiming she had taken “all reasonable steps” to renounce her British citizenship before the election.

Sharkie subsequently regained her seat at last year’s by-election and appears on track to retain it at this month’s poll.

“You’re only ineligible if the court declares you that way,” Champion told InDaily.

“Because no court case was taken at that time, I was clearly eligible – I voted on things.”

He said he did not consider it an issue initially as “we were going off the court decisions at the time”, whereas “10 years later there is in effect a new interpretation by the High Court”.

He said while he held a right to British citizenship, he had never taken it up and did not hold it at the time he was elected.

Anne Twomey, a professor of Constitutional Law at the University of Sydney, agreed Champion “may well have been” invalidly elected, but suggested he was far from alone.

“Yes, like a rather large proportion of parliamentarians, he may well have been invalidly chosen back in 2007,” she told InDaily via email.

However, she added “s44 only operates in relation to people currently chosen or sitting as a senator or a member of the House of Representatives, so prior breaches generally cease to be relevant”.

Constitutional law professor John Williams from Adelaide University said: “We know there were people historically elected into parliament who had dual citizenship… but because the law was not as clear and no-one referred them, there’s no way of testing eligibility.”

ALP state secretary Reggie Martin did not wish to comment on the matter.