InDaily revealed yesterday that the Liberals would not field candidates in the February 9 ballots to be held in Cheltenham and Enfield, after former Premier Jay Weatherill and his deputy John Rau bowed out of politics last month.

But party moderate Saru Rana, an anti-domestic violence campaigner who runs the local edition of The Indian Sun, “a cutting edge community media platform targeting South Asians living in Australia”, today announced she would run as a “Liberal independent” – insisting her campaign would be self-run and funded.

There’s a touch of déjà vu about the move – when the Liberals opted not to run candidates in the 2012 by-elections that saw Labor’s last leadership team of Mike Rann and Kevin Foley exit parliament, moderate-faction staffer Sue Lawrie put up her hand as an independent to give voters in Port Adelaide a Liberal voice.

Party insiders insist Rana’s campaign in the north-eastern suburbs seat is being given no strategic or financial support, with one insisting: “She’s on her own.”

But the move was nonetheless met with scepticism in some quarters, with one party source saying: “Run or don’t run a Lib – just don’t send off some Kool-aid drinking, dyed-in-the-wool member to be a barometer!”

It comes as Liberal State Director Sascha Meldrum confirmed InDaily’s report from yesterday, saying in a statement that the party “has decided not to run candidates in the February by-elections in Cheltenham and Enfield”.

“The Liberal Party will instead focus on campaigning strongly in the federal election,” she said.

“It is vital that we continue to have Federal and State Liberal Governments working together to achieve a strong positive future for South Australia, rather than risking our state’s future with a high-taxing Shorten Labor Government.”

Rana told InDaily she had “lived in Enfield for a long time [and] I think people in the electorate deserve a Liberal voice”.

“The party decided not to run a candidate for its own reasons – I’m here to give those people a choice,” she said.

“I believe in Liberal principles.”

However, that doesn’t appear to extend to all Liberal policies.

Despite the party only today confirming it would not run candidates next month, Rana appears to have a well-resourced and well-prepared campaign, releasing detailed election material, in which she says would “lobby the Marshall Government to reverse its decision to close our local [Prospect] Service SA, used by hundreds of locals every week to access essential government services and support”.

“Our elderly and disabled residents, those on low incomes, with limited English or computing skills rely on face-to-face help from Service SA staff,” she writes in the mailout.

“We need this office to stay open.”

Rana told InDaily she would “call for a review” into the planned Service SA closure.

“I’m supporting having a conversation with the local residents, being there and trying to listen to them and help them,” she said.

She insists she always intended to run as a Liberal independent, regardless of the party’s decision.

“When the by-elections were called I did express my intentions to run as an independent… I had a conversation with the Liberal state director [and] there was no indication they were not running a candidate.”

She confirmed she was “still a member of the Liberal Party” and had sought – and received – permission under electoral law from the party to use the word in her election material and on the ballot-paper.

“I needed the party’s approval to run and the party’s indicated they will provide that support – I’ve been given permission to use the word ‘Liberal’ next to my name,” she said.

Former Liberal frontbencher Duncan McFetridge sought similar approval from the party before the state election, but it was not granted.

Asked whether she was disappointed in the party’s decision not to run an endorsed candidate, Rana said: “I would suggest that question be referred to the state director.”

Rana appears linked to the party’s moderate wing, appearing on social media with prominent members of that faction, including federal candidate for Adelaide Shaun Osborn and senator and moderate powerbroker Anne Ruston. 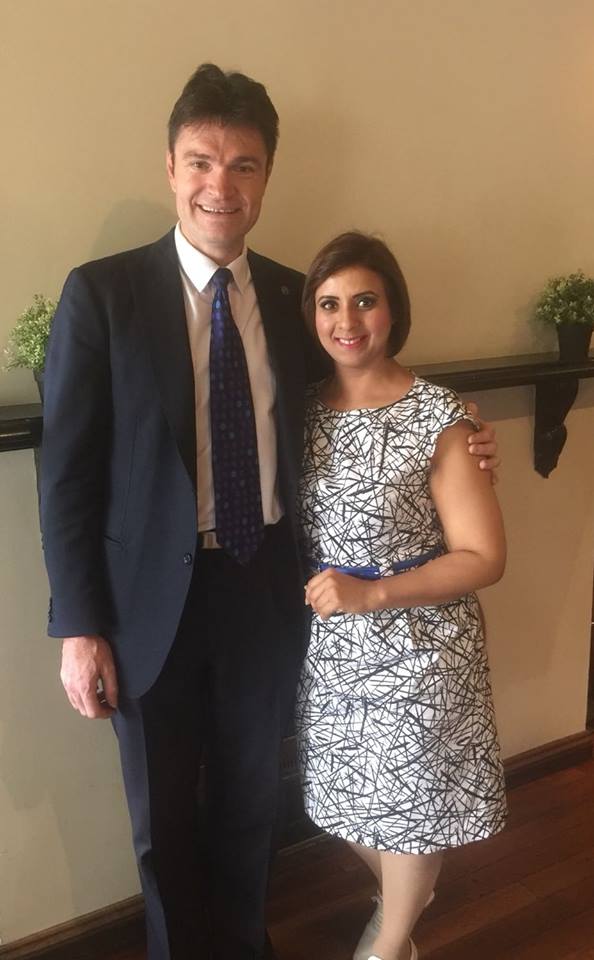 Osborn told InDaily Rana was an “active Liberal Party member and a marvellous person”, with the longtime policeman having “supported a lot of the work she’s done”.

“I’m very supportive of her running for parliament,” he said.