Rik Morris, a former media adviser to Mike Rann and Jay Weatherill, was sacked from his role as executive director of the Department of Premier and Cabinet in March by then-acting CEO Erma Ranieri.

He has since run his own consultancy business, ‘The Intermediary’, but confirmed to InDaily that he will be taking up a senior role in the office of Labor leader Peter Malinauskas in the new year.

“I’m excited to be involved,” said Morris, who was the ALP’s candidate for the north-eastern suburbs seat of Florey at the March election, losing to independent incumbent Frances Bedford, who quit the Labor Party last year.

The former ABC and BBC journalist was closely aligned with the ALP’s Right faction, and left the Premier’s office after Left-winger Weatherill beat former deputy leader John Rau to the top job.

However, he was later called back into the fold to oversee Weatherill’s communications campaign in the lead-up to the 2014 state election, which Labor won in a shock result.

Since then he worked as general manager of the SA Tourism Commission before joining DPC in a “whole of government leadership role in Communications, Engagement and International Relations”.

At the time of his sacking, Ranieri told InDaily: “It is my priority to ensure the Department continues to provide exemplary and valued support to the Premier and his Cabinet, and assists with the implementation of the Government’s election commitments – it is my determination that this decision is required to best fulfil these substantial responsibilities.”

Morris will become Malinauskas’s “director of strategy”, a role operating between policy and media engagement.

“It’s all about regaining people’s beliefs in what our vision is for the state,” he said.

“There’s a lot to do there – you don’t lose an election and not have work to do.”

He also worked briefly for then-Premier Lynn Arnold before Labor’s post-State Bank election disaster of 1993 – which means he has now served every SA Labor leader for the past quarter of a century. 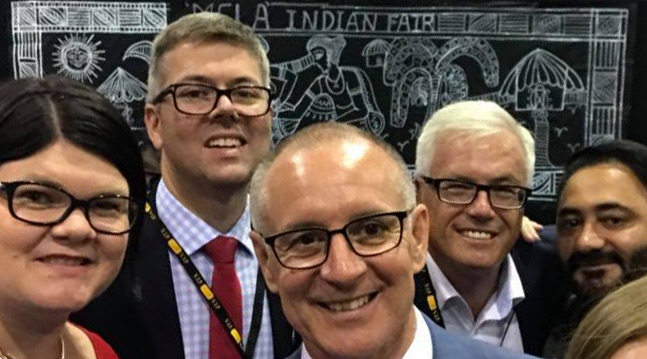 Morris (second from right), with Jay Weatherill and other Labor candidates during the campaign.

The move will also reunite him with fellow political survivor Kevin Naughton, a former ABC, News Corp and InDaily reporter who was Martin Hamilton-Smith’s spin doctor when he was leader of the Liberal Party. Naughton returned to Hamilton-Smith’s side when he jumped ship to join the Weatherill cabinet, and was kept on first by Weatherill and then Malinauskas after his successive former bosses bowed out.

Morris and Naughton go back a long way: the former was once a producer on ABC’s local Drive program – which the latter was presenting.

InDaily reported this week that SA Labor’s commitment to a national edict for a 50 per cent quota of women in parliament by 2025 could affect Morris’s chances of running in Florey again in 2022, with Labor confident of regaining the seat if and when Bedford retires.

Sadly for Labor, though, Bedford told InDaily this week she had no intention of retiring at the next election – and is intending to set the record for the longest-serving female MP in an Australian lower house.

“While the people of Florey still want me, and I feel able to serve them as I always have, I’m happy to keep going,” she said.