Drakes Supermarkets CEO Roger Drake has described the Liberal Party’s push to deregulate shop trading hours as “corporate greed” that would push small businesses out of the market.

But Treasurer Rob Lucas says the general manager of Drakes Supermarkets, Bob Soang, has applied for, and been granted, a temporary exemption from normal shop trading hours at Wayville Foodland – so that the business can capitalise on increased foot traffic during the Royal Adelaide Show.

The government has seized on the application.

“The irony of this situation is not lost on me or the government,’’ said Lucas.

“By seeking an exemption, Drakes Supermarkets has acknowledged what most South Australians already know to be true: that if businesses want to open, if customers want to shop and if employees are willing and able to work, why should the law stop them?

“I’d advise any business in the area that would also like to take advantage of extended trading hours during the Royal Show to seek an exemption as soon as possible.”

He added that “a ministerial exemption wouldn’t be required if our opponents from the Labor Party and Independent Retailers were supportive of our bid to reform shop trading laws”.

Soang applied to trade until 10pm each night, and from 7am Sundays, during the Royal Adelaide Show period from August 31 to September 9.

An extract from Soang’s application, distributed by Lucas’ office, says that, in being granted the exemption, “we will be able to meet the requirements of most visitors – including tourists – attending the Show who want to remain at the Show in the evening until after the fireworks display and who need to purchase groceries afterwards”.

“If the exemption is not granted, the requirements of those visitors will not be met.”

Roger Drake has been a long-time opponent of deregulating shop trading hours.

In 2016, he said he was “staggered” by the policy, which would “will mean extra costs and that must be passed on to the consumer in the end”.

“I really feel for the butcher, the fruit and veg shops, these small businesses that the Liberal Party is supposed to support are just going to go to the wall.

“They’ll be forced to close and where will the volume shift? It will shift to the big end of town.”

Lucas told reporters this morning it was ironic that a Drakes supermarket had made such an application, and that it demonstrated the need for legislative reform.

That’s despite the other irony – that the Government was using an exemption allowed under current law to argue that the law needed changing.

But Lucas argued that it shouldn’t be up to the minister of the day to decide when businesses can and cannot open.

“As minister under the current Act I do have considerable powers … and I would indicate that I would fully intend to use them where it is sensible,” he told reporters.

“(But) why should it be ultimately up to the individual views of a particular minister and the government of the day?

“The trading laws should actually allow them to make these commercial judgments in their own interests and the interests of their customers.” 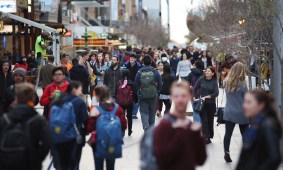 In April, he declared that the Government was “on the side of Westfield, Coles and Woolworths” whereas Labor was interested in protecting small business.

“We know that the Liberal Party’s legislation is going to take away jobs… it will take sales away from independent grocers and put it back in the pockets of the duopoly,” he said.