Opinion is divided internally about whether Downer is the right candidate for the largely Adelaide Hills-based seat her father Alexander held for 24 years, with some sources telling InDaily the seat was no longer winnable for the Liberal Party at the general election – to be held by May 18 next year.

The Liberal vote crashed to a two-candidate preferred 42.4 per cent on Saturday against Centre Alliance crossbencher Rebekha Sharkie, with Downer failing to make headway in the polls throughout a long campaign.

Some senior Liberals have blamed the campaign strategy, with one declaring Downer was “a terrific kid who answered anything that was thrown at her” but that “the rest of it dragged her down”.

That included robocalls “targeting rusted-on Liberal voters” and a failure to land a punch on Sharkie.

“I shook my head a bit at some of the stuff… we didn’t seem to be able to put the shit on like Labor do,” said one source, who did not want to be named.

The insider also lamented Alexander Downer’s enthusiastic participation in the campaign from the outset, which came to a head with his pre-poll social media post lambasting Sharkie supporters as “new arrivals” to the electorate. 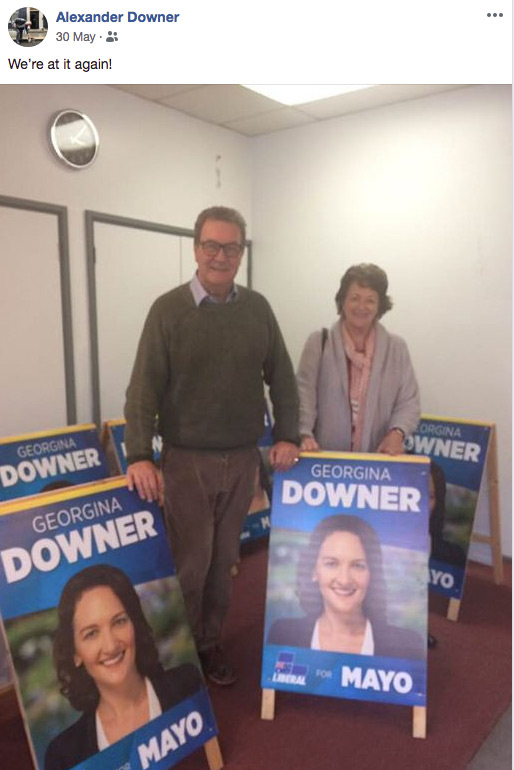 Georgina Downer attended the declaration of the poll this morning but was reticent when questioned by media.

Asked about her father’s involvement in the campaign, she said she was “really happy to have the support of my parents and my partner and my children – it was great”, but declined to answer whether she thought Alexander’s continued presence had had a detrimental effect. 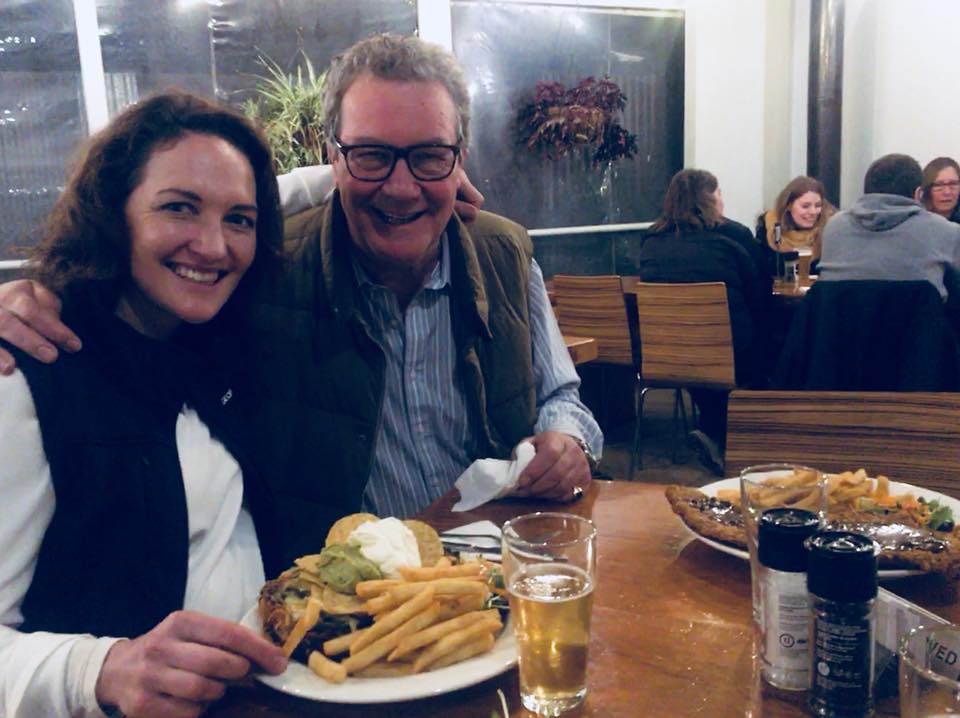 She again declared she “will be renominating” for the seat, with nominations for all SA Liberal seats closing next Wednesday.

Asked whether she expected a challenge given Saturday’s showing, Downer said: “I’m not aware of anyone putting their hands up at the moment [but] I really welcome the process.”

Two prospective candidates withdrew from the by-election process after they could not produce documentation confirming their citizenship status – the issue that brought on the by-election in the first place.

One of those was believed to be bureaucrat Reagan Garner, who has not responded to inquiries about whether he intends to renominate.

But one source believes prospective candidates may now be dissuaded from nominating because the seat is now not considered winnable.

One insider said the “best bet of winning back Mayo is after one term of a federal Labor Government”, while another similarly argued it “would require a candidate to run two campaigns” – but not Downer.

“I don’t think Georgina will ever win the seat – and someone needs to sit her down and tell her that her name is disastrously working against her,” they said.

However, there is a “clear divide within the party” about the likely candidate’s suitability, with another senior source insisting there was “no doubt” Downer will again be the candidate – and would “fare better at the election than the by-election”.

“I think she’s half a chance,” they said.

“I’m absolutely sure that Rebekha is more popular than Georgina today, but I’m not sure the margin is truly reflective of a general election vote… there’s generally always a swing against governments at by-elections.” 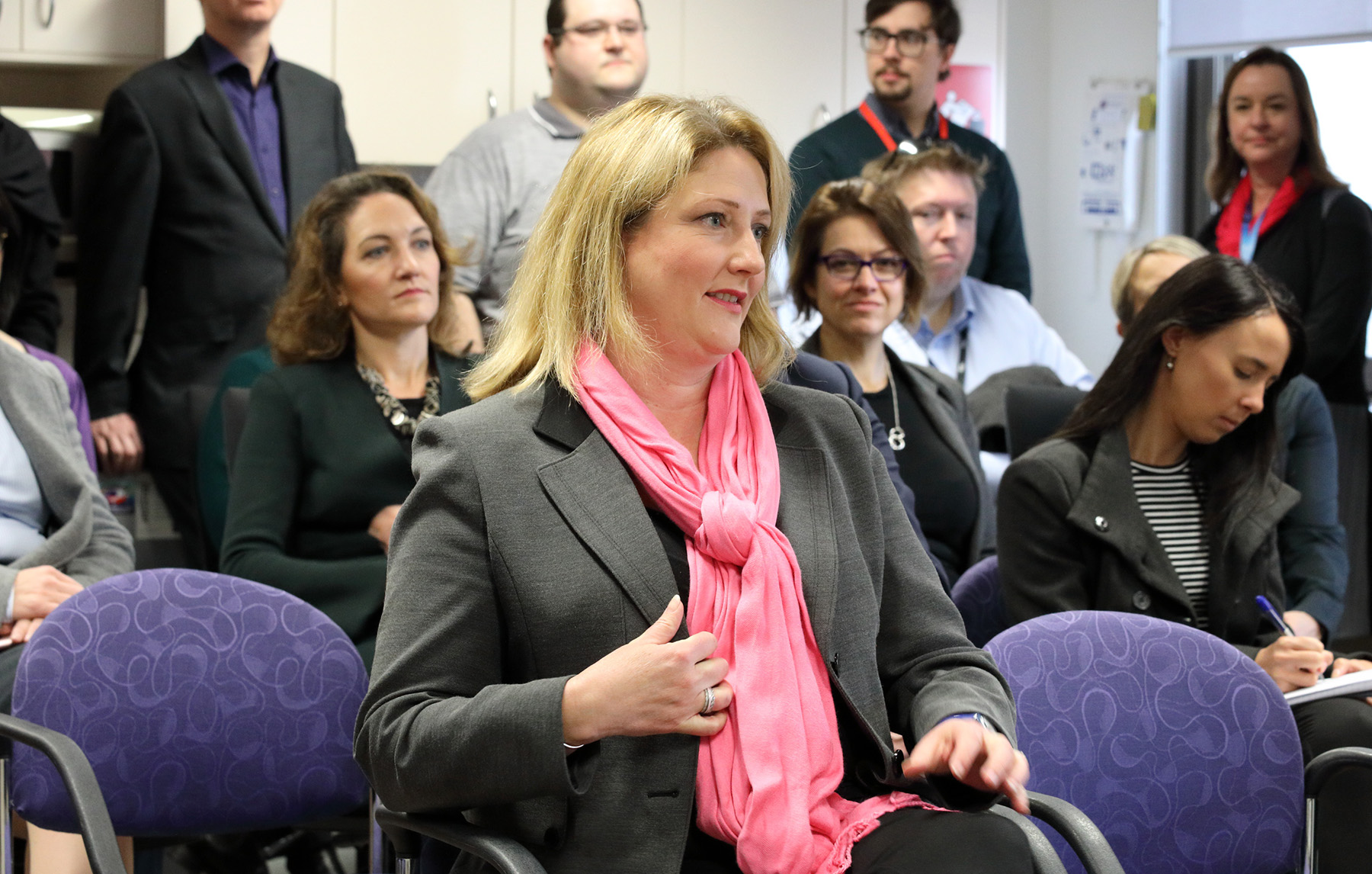 The insider said a general election would require “a different strategy” because “you’re asking a different question of the voters – who do you want for government?”

“I’ll be very surprised if anyone else nominates, given the Prime Minister has said Georgina is the candidate, so they can stand against the PM’s wishes if they want – but history shows that’s not a great strategy,” they said.

However, they conceded “there’s a lot of lessons to be learned over this campaign”.

“I’m sure the Liberal Party will review it,” the insider said.

“I think Rebekha is beatable… Rebekha Sharkie belongs to a party, and [we] should expose that party’s policy platform – it’s got more holes in it than the Titanic.

“I think [the Liberals] need to be smarter about exposing Sharkie’s policy positions and her lack of achievements.”

The source noted the discrepancy in funding commitments made by the Coalition to Mayo over the campaign, compared to cash splashed in Tasmania and Queensland, and dismissed Sharkie’s campaign pledge to “Make Mayo Matter”.

“She actually made it irrelevant – because the Government don’t have it and ultimately they can govern without it.

“They [voters] have voted for a permanent backbencher as distinct from a possible minister.

“I wouldn’t be too despondent if I was Georgina – I’d just get back on the horse and ride it harder.”

Sharkie did not buy into the Liberal Party’s internal machinations after today’s declaration, saying “there will be a Liberal candidate and I look forward to the contest, whoever it is”.