With the parties’ How-to-Vote cards now revealed, it’s clear again how preference allocations are mostly decided by strategy, sometimes by revenge, and only occasionally about principle (and only when that suits the strategy).

The Greens, as we have reported previously, are preferencing the Liberals over SA Best in a range of seats, many of which the Xenophon party had hopes of winning.

While the Greens argue that Nick Xenophon has an anti-renewables track record, an election scorecard produced by the SA Conservation Council, the Australian Conservation Foundation and the Wilderness Society has ranked SA Best’s environmental policies ahead of both Labor and the Liberals. 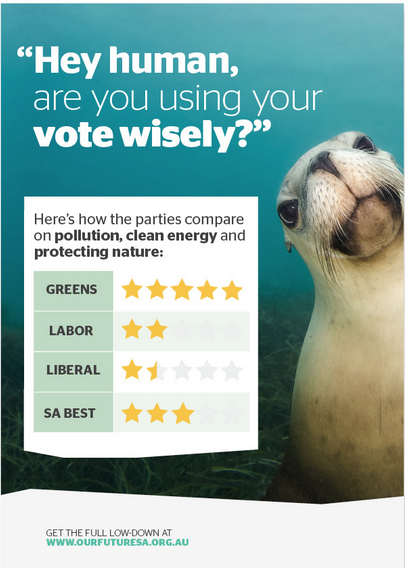 SA Best’s Waite candidate Graham Davies, as we noted in a previous edition of the diary, has impeccable environmental credentials, including as the past vice-president of the SA Conservation Council.

The Greens have placed him behind the Liberals on their how-to-vote card. 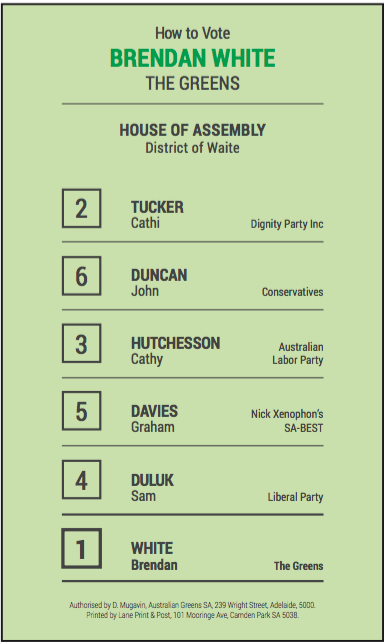 In Hartley, which Xenophon himself is contesting, a similar pattern has been recommended by the Greens, who seem determined to hang on to their status as the third most significant party in South Australia. 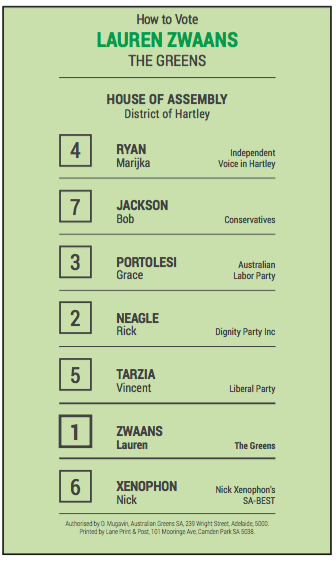 Marshall gets in early

Opposition Leader Steven Marshall today cast his vote for his seat of Dunstan, more than a week out from the state election.

The member for Dunstan said he was entitled to a pre-poll vote because he will be busy campaigning on the day of the election, which he insists counts as a “work” excuse (you can cast a pre-poll vote if you are working and are unable to leave your workplace to vote).

He voted at the pre-poll centre in Glynde – the site yesterday of long queues and an altercation between an over-zealous polling official and Labor candidate for Hartley Grace Portolesi.

The Electoral Commission issued an apology after Portolesi was, erroneously, chastened for handing out how-to-vote cards.

Marshall said his team would be doing the same up to the election at the pre-poll centres.

“There have been changes to the laws to allow us to be on booths handing out how-to-vote cards – that’s what I’m going to be doing the entire way through March 17,” he said.

As InDaily has reported previously, GetUp ran a heavy campaign at the Queensland state poll last year in opposition to the proposed Adani coal mine. It has since surveyed its South Australian members, who expressed deep interest and concern in renewable energy – a key theme in the SA campaign so far.

However, GetUp has not entered the fray and, with under two weeks until polling day, it seems unlikely to do so.

GetUp tells Campaign Diary that is keeping a watching eye on the campaign and can ramp up its activities quickly if it sees the need.

From Habib to Zou

Labor is trying to play a hardball game over the alleged $1.2 million donation from Chinese businesswoman Sally Zou to the Liberal Party.

As reported widely, a mysterious Tweet from Zou appeared on Friday, apparently showing a giant cheque made out to the Liberals.

As of today, the party had not received the money, but it’s an issue that has been taking up a lot of interview time with Liberal leader Steven Marshall.

Conveniently for Labor, the issue has taken attention away from the scathing ICAC report into the appalling Oakden older persons mental health facility.

Even if the Zou donation comes through (and she has deleted the Tweet), there is nothing illegal about a businessperson donating money to a political party as long as it is properly disclosed.

But, still, Labor is hammering away at this issue with designated attacker Tom Koutsantonis again out again on the issue today.

Koutsantonis told reporters the Labor Party had received calls from a  “number of sources” in the state’s business community who said Zou had offered Marshall a new car, among other gifts.

However, the Treasurer refused to reveal the source of the information.

“I’m not going to reveal confidential sources no more than what I would expect you to do so,” Koutsantonis told reporters.

Marshall said today Zou had been to his home on a number of occasions but he had not received from her anything “significant that needs to be disclosed” (South Australian MPs must declare gifts worth more than $750).

“This is pure muckraking because they (Labor) have nothing else to talk about,” Marshall said.

Koutsantonis was less concerned about Tom Kenyon’s links with Zou, saying the MP had been “cheeky.”

More darkly, he said: “This is very mysterious, very strange and quite frankly very creepy. The people have a right to know – this is a democracy, this isn’t China.”

There are shades here of Labor’s “Can you trust Habib?” flyer, aimed at Liberal candidate Carolyn Habib during the 2014 election campaign – a tactic that drew concern from within its own ranks.

Labor should take care in its strategy on Sally Zou: it could leave itself open to accusations that it is again dog-whistling for the xenophobes.

Considering the time and money it has spent on attempting to build business links with China, leaving such an impression would surely be a case of putting politics above policy.