The first votes are being cast in the state election today, with pre-poll stations opening across Adelaide and regional South Australia this morning.

InDaily has had reports from two centres – in Glynde and Mt Barker – that there are long queues, in the Adelaide Hills’ case due to a minor technical problem.

There are a range of criteria which make people eligible for registering an early vote – such as work and religious commitments, travel plans or disability – and it looks like many South Australians are eager to cast their judgement.

The Electoral Commission confirmed that the Glynde centre had much bigger attendance than it had anticipated. The commission also confirmed that the electronic process for looking up electors’ details failed in Mt Barker, leading to the more time-consuming process of filling out pre-poll envelopes.

What do we want? Urban sprawl!

A rally held at Parliament House yesterday by the Community Alliance aired a grab-bag of grievances, from “high-rise” in the suburbs, to Transforming Health, to changes to the planning system.

Now Rau might have made a few enemies in the suburbs with his changes to the decision-making processes in planning and his agenda to turn around South Australia’s development focus from urban sprawl to urban infill, but it’s a stretch to compare him to one of the great monsters of history, as did this low-rent bit of signage on display yesterday. 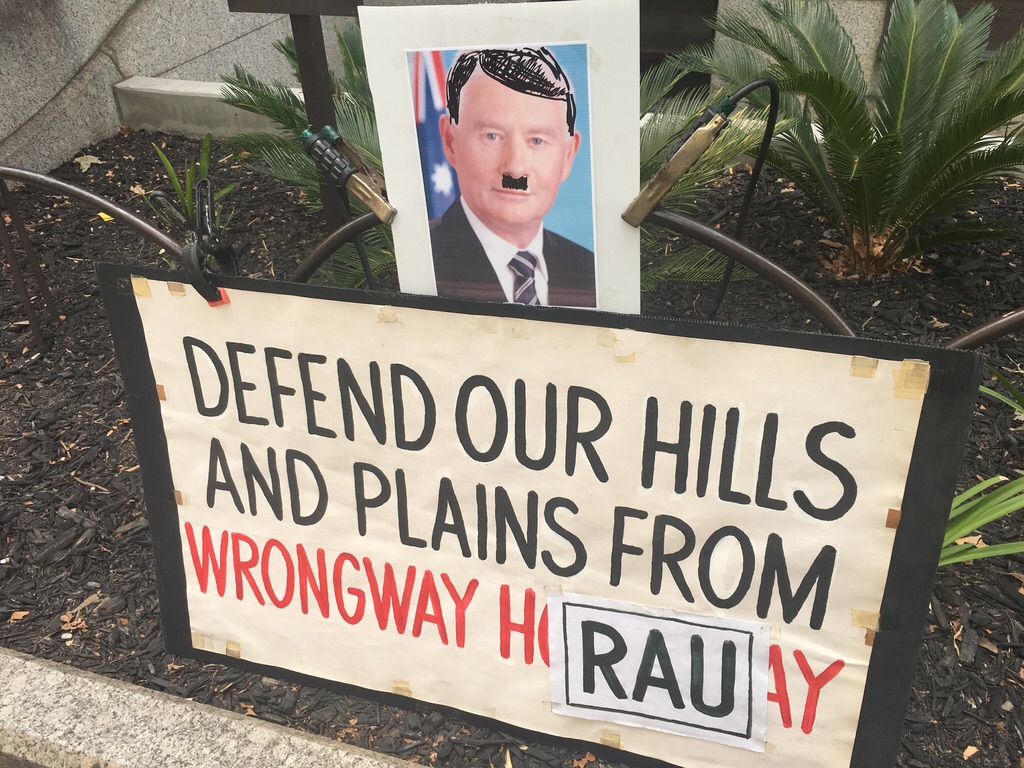 And it does seem somewhat ironic that Labor and Rau received a touch-up from the anti-population growth people.

To summarise the party’s views: so far in this campaign Labor’s Jay Weatherill has expressed ambivalence about the need to supercharge South Australia’s population growth, while the Greens have a policy to stabilise growth and limit urban sprawl. SA Best’s Nick Xenophon is unambiguously in favour of a growing population and Liberal leader Steven Marshall is also a population growth advocate. Indeed, ahead of the rally yesterday, the Liberals announced an agreement with the feds to pilot a new business visa in South Australia.

Yet, it is Labor that seems pegged as the party of unsustainable growth and unwanted change in the ‘burbs – a reflection of the difficult nature of planning politics and Labor’s flagging communication and policy efforts in this compelx area.

Surely the policy equation is this: given that population growth can’t be turned off instantly, if you oppose higher density in built-up areas then you must be in favour of urban sprawl. People need to live somewhere.

Mark Parnell, who addressed the rally, said there was a diversity of views expressed by the attendees, some of which were inconsistent with each other.

On the Rau poster, he said he hadn’t seen it on the day but it was obviously offensive.

However, she said there was an anti-Rau sentiment at the rally because of the “travesties” in the planning system that he had overseen.

On the Liberal position, she said the party supported population growth and urban infill, but only where that was supported by infrastructure and where it wasn’t “extreme”.

“We don’t need 10 storeys along Fullarton Road,” she said.

Much Ado About Nothing

Sigh no more, ladies, sigh no more.
Men were deceivers ever,
One foot in sea, and one on shore,
To one thing constant never.

The campaign, so far, has been devoid of poetry (no – Nick Xenophon’s “rap” doesn’t count) and, at times, meaning.

Case in point – this morning the major parties were parrying over an apparently non-existent election donation.

Chinese businesswoman Sally Zou kicked off the nonny-nonny with a cryptic Tweet on Friday apparently showing an image of a cheque for $1.2 million made out to the Liberal Party.

She has since deleted all tweets apart from one, which seems to call on the Indian Prime Minister Narendra Modi to invest more in Australia.

The message attached to the image of the cheque read: “This is a life-journey wandering the Man, who is met a beautiful accident … Perhaps is casual transmigration, and this was born, wish you LIBERALS had enough.”

The Liberal Party seems as baffled as anyone – it hasn’t received any money, at least as yet.

“It was a very odd tweet … the reality is we haven’t received a cheque for $1.2 million,” Marshall told ABC Radio Adelaide today.

“The real question is, what is Ms Sally Zou buying for a $1.2 million donation?” he asked a media conference this morning.

“Steven Marshall has a lot of questions to answer and just as we saw in the last election campaign when he’s asked questions he goes into hiding. These are questions he has to answer.”

Considering the Liberal leader was interviewed extensively on the matter this morning, the Premier’s comments ring as hollowly as everything else about this incident.

Weatherill’s answer when pressed about whether the Labor Party would accept a donation of $1 million from a single donor would have surprised party officials.

Labor, of course, accepts donations from many “forces” outside the party, including the hotels lobby.