The plans also detail the Government’s justification for the lack of a right-hand turn from North Terrace onto King William Street and foreshadows an end to all peak-hour turning actions for trams at the key intersection.

This means an end to the regular Glenelg-to-Entertainment Centre route, in favour of east-west and north-south movements – a decision intended to maximise traffic flow.

InDaily can reveal the CityLINK tram loop would run down East Terrace to Hutt Street, turning right to traverse most of the length of Halifax Street.

The Government’s preferred course then veers right to round the northeastern boundary of Whitmore Square, traverses a city block’s length of Morphett Street to turn left on Gouger Street – about 250 metres away from the Central Market – before heading up West Terrace and closing the loop at North Terrace.

Transport Minister Stephen Mullighan told InDaily the southern section of the city could do with some encouragement for small-to-medium scale residential development and that Gouger Street would not cope with the traffic and car parking impact of a tram service through its centre. 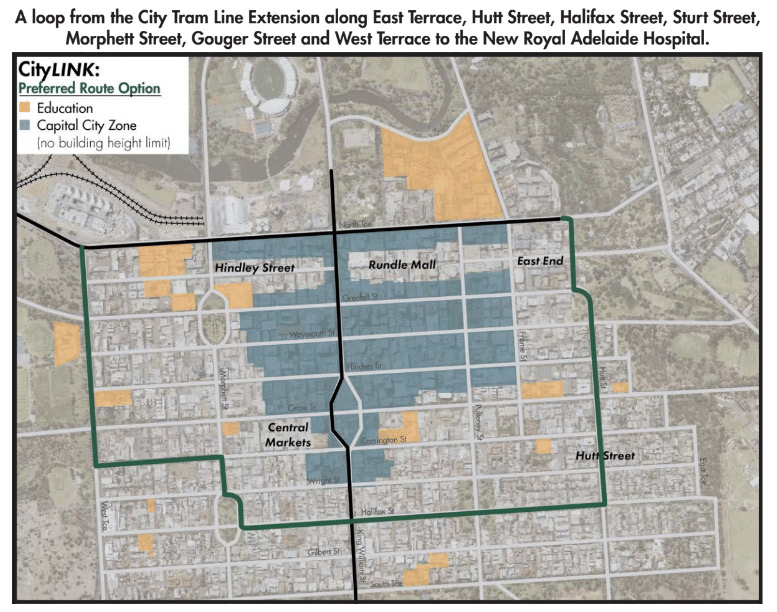 The Labor Party’s preferred CityLINK tram route traverses Halifax Street to the south of the city.

The Government’s CityLINK consultation document says there is potential for a tram stop near the Central Market on the route.

Adelaide’s existing north-south tram service through the CBD features a stop at the western edge of Victoria Square, much closer to the markets, in front of the Hilton Hotel.

Mullighan said laying tracks along Gouger Street would have meant trams having to share the road with other traffic – reducing the reliability of the service – or getting rid of on-street car parking along the eastern portion of the street in front of the Adelaide Central Market and Chinatown.

“There’s only really that one lane of traffic that’s available (along that stretch of Gouger Street),” said Mullighan.

“It would be very, very tight.

“I can’t imagine that would be acceptable to the Gouger Street traders.”

Mullighan argued that while there had been a lot of residential development along the western portion of Halifax Street in recent years, the eastern stretch between King William Street and Hutt Street had been relatively neglected – and a tram service would help meet the Government and the Adelaide City Council’s population growth targets.

“We’ve seen a lot of two-storey-type medium density townhouses already in Halifax Street (west … providing) a substantial boost to the number of residents in the city,” he said.

If there were a shift from low- to medium-density housing along the eastern portion of Halifax Street “that would be a very successful outcome for the trams,” he said.

He added the route had the further advantage of taking in the southwestern corner of the CBD, which had “hasn’t yet been developed very much”.

InDaily understands the length of the preferred CityLINK route means travelling the entire loop would take 45 to 50 minutes – 15 to 20 minutes longer than the complete City Connector free bus service route currently does.

But Mullighan argued that that was immaterial because it was unlikely commuters would use CityLINK to travel the entire loop, but rather they would use the service to access different parts of the city.

“We wouldn’t anticipate that someone would jump on the city loop … and ride the whole route,” said Mullighan.

He added that a tram route along Halifax Street could be engineered to avoid removing established trees along the median strips west of Pulteney Street and that there would need to be significant consultation with businesses and residents in the area.

The Government’s consultation document for the CityLINK tram loop shows plans for a “termination point with tram storage” to be built on Rundle Road and a new tram depot for up to 60 trams between the city and Adelaide Entertainment Centre.

No tram turns – at all – on city’s busiest intersection

The CityLINK consultation document also foreshadows an end of the regular Glenelg-to-Entertainment Centre route and details the Government’s justification for the lack of a right-hand turn from North Terrace into King William Street.

In the longer term, under the Government’s plans, all turning movements at the North Terrace/King William Street intersection would be eliminated for all peak hour tram services.

Late last year, InDaily revealed that the Government saved $20 million by rejecting a “grand junction” to allow all turning movements for trams at the city’s busiest intersection.

But the Government’s transport planners are keen to get rid of tram turning actions to help maintain traffic flow.

According to the consultation document, Government modelling shows 60 trams an hour – one every minute – traversing the North Terrace / King William Street intersection at peak times.

“Assuming the existing two minute signal cycle, this would mean an average of two trams moving through the intersection in every signal cycle during the peak period.”

The key intersection caters for about 60,000 vehicles per day and several thousand pedestrians.

Show us the money, and the modelling

Despite its planning though, the State Government is yet to secure funding for CityLINK.

Mullighan told InDaily the Government was still putting together a business case that would be used to apply for funding from Infrastructure Australia.

He said a re-elected Labor Government would build the EastLINK and ProspectLINK tramways within the next four-year term, but CityLINK was a longer-term proposition.

Yesterday, InDaily revealed that Labor’s plans to extend EastLINK included laying tracks over much of the “green island” median strip on Osmond Terrace.

The Government’s city tram loop plans have attracted majority support among those who returned consultation survey forms – but only 21 forms were filled out.

The Government has yet to release traffic modelling, crowd modelling or rail service modelling for any of the newly announced, proposed tramways.