Campaign Diary can reveal that Liberal leader Steven Marshall will take on the crucial defence industries portfolio if his party forms government.

Marshall, who has already indicated he would be responsible for indigenous affairs as Premier, has been focused this week on announcements about how a Liberal Government would make the most of the multi-billion-dollar shipbuilding program to come for South Australia.

Part of his sales pitch is his capacity to deal with his party colleagues in the Federal Government, which holds the big bucket of defence cash.

And he was showing off these connections this week.

Yesterday, he appeared with federal education minister Simon Birmingham, a South Australian, to talk about maximising jobs in the industry and building local skills.

Today, he was alongside another South Australian, federal defence industries minister Christopher Pyne, to release a policy for maximising defence industry export opportunities for local businesses.

Key measures included competing to have the biennial Land Forces conference in 2020 and then making Adelaide the permanent home of the international defence expo, measures to help local SMEs in the sector, re-establishing a network of trade offices overseas, and establishing a defence industry scholarship fund.

That ubiquitous SA best jingle may be urging voters to “forget the rest”, but Nick Xenophon today revealed a slightly different campaign theme as he begins a desperate rearguard action to combat Labor’s decision to preference against his party in 23 of the state’s 47 lower house seats.

Given SA Best’s hopes for success have always rested on the likelihood that their candidates could finish second in a raft of seats and surf ahead on preferences, the ALP’s move could effectively lock the fledgling party out of 23 electorates – a devastating blow for a party fielding only 36 candidates.

With the Liberals likely to pull a similar move, Xenophon today road-tested his new mantra.

“Our plea will be to the voters who… don’t vote for SA Best: give us your second preferences, because we’re genuinely a party of the political centre,” he told reporters.

Xenophon said his party’s “whole campaign strategy has been predicated [on the assumption] both major parties hate SA Best more than they hate each other, because they’re a cosy duopoly”.

He reiterated that SA Best will run an open preference ticket on March 17.

Premier Jay Weatherill announced this morning that the world’s largest producer of household battery and solar energy storage systems, German company sonnen, was planning to move its Australian manufacturing base from Sydney to Adelaide.

The move is expected to create 430 jobs in installation, manufacturing and administration.

He said the location of a battery manufacturing centre was yet to be determined.

He said the company had chosen to move to South Australia primarily because of its skilled workforce.

“Firstly and most importantly the skilled workforce that we have here (encouraged the move),” he said.

“The second thing is the access to ports to access our Asian markets … and, the market here, the overall environment is the best in the world to sell energy storage.”

The state’s key business lobby group, Business SA, today released a 100-page “Charter for a more Prosperous South Australia” which, it says, would make South Australia a more competitive state – should the policy prescriptions be adopted.

On that last point, it wants to cut the number of state politicians and ministers, amalgamate councils in metropolitan Adelaide, and fix the wages gap between the public and private sectors.

CEO Nigel McBride says South Australia “should be a thriving state with a bright future”.

“Instead, we have a morbidly obese public sector, payroll tax rates which penalise our successful small and medium-sized businesses, the most expensive power in our nation, and an ageing population and slow growth,” he said.

He backed his claims about the public sector with a report commissioned form the SA Centre for Economic Studies (SACES).

Michael O’Neil from SACES said the state had a significantly larger public sector – proportionally – than other states and jurisdictions overseas.

“But there is no evidence that South Australia has a more dynamic, wealth-creating economy than other states, or that we have a more effective or efficient public sector,” he said.

“This is not a debate about small or big government. It is a debate about improvements in the quality of government policy and service delivery to ultimately advance community welfare of all South Australians.”

However, it’s likely to get much traction on this point – both the Liberals and Labor aren’t keen on opening up the possibility of public service job cuts in the midst of a campaign (although both want to impose an “efficiency dividend” on departments). 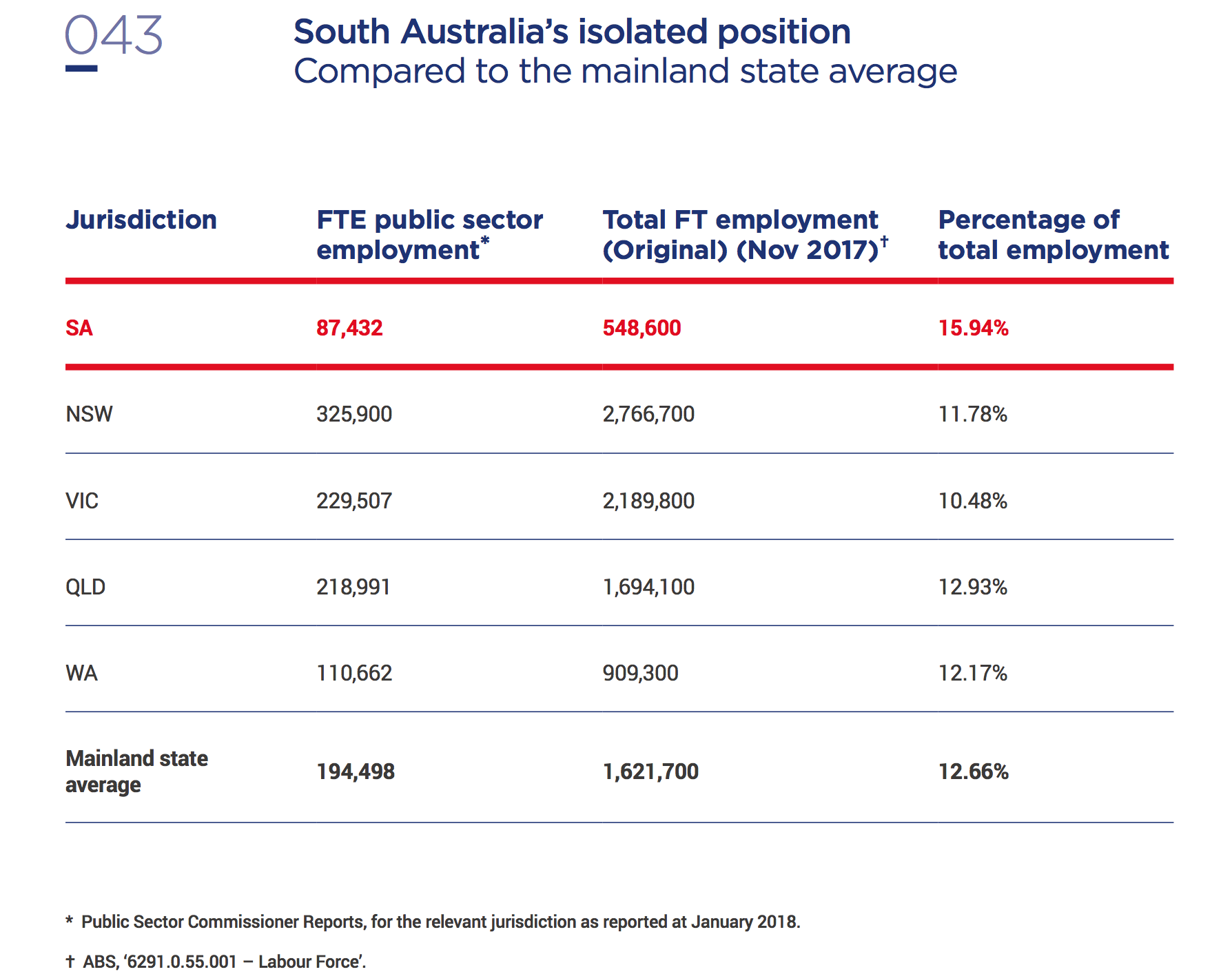 Despite his own Treasurer’s stated determination to extract “efficiencies” from the public service, Premier Jay Weatherill went on the attack today.

“There’s one side of politics that is proposing very large tax giveaways that have to be funded.

“It’s got to come from the public service. What does that mean? Deep cuts to health and education – that means schools and hospitals.”

When asked if he would rule out further cuts by Labor to the public sector, he said: “You’ll see how we deal with that later in the campaign. But what I can tell you is this, we will not be engaged in massive cuts to public services including schools and hospitals, health and education.

“We’ve already made some announcements about efficiencies and you’ll see how we respond. The size of the cuts that are necessary to fund the promises that have already been made, and they haven’t finished yet, in terms of these tax giveaways are extraordinary.

“We only have razor thin surpluses.”

On that final point, it might be worth remembering that Weatherill’s spending promises in the first week of the campaign so far are approaching the $3 billion mark.