Campbelltown deputy mayor Marijka Ryan, who unsuccessfully nominated for Liberal preselection in neighbouring Torrens, has declared she will run as an independent in Liberal Vincent Tarzia’s seat of Hartley, facing off against SA Best leader Xenophon and former Labor frontbencher Grace Portolesi.

InDaily can reveal Ryan also joined the Australian Conservatives late last year and briefly held membership in both parties concurrently. But she says she has since resigned from both, and insists she is no Liberal stooge.

“Well, yes, a lot of people will probably think that,” she said today, conceding: “I would prefer to see a Liberal Government in rather than Labor.”

“I think they’ve done enough damage for a lifetime… but my intention is to run, and to win, as an independent. Whoever the government is at the time, I’m happy to work with, because I believe the residents here in Hartley have been dudded by everybody.”

Despite previously having designs on the seat of Torrens, losing preselection to Christopher Pyne staffer Therese Kenny, Ryan insists: “Hartley people are my people.” 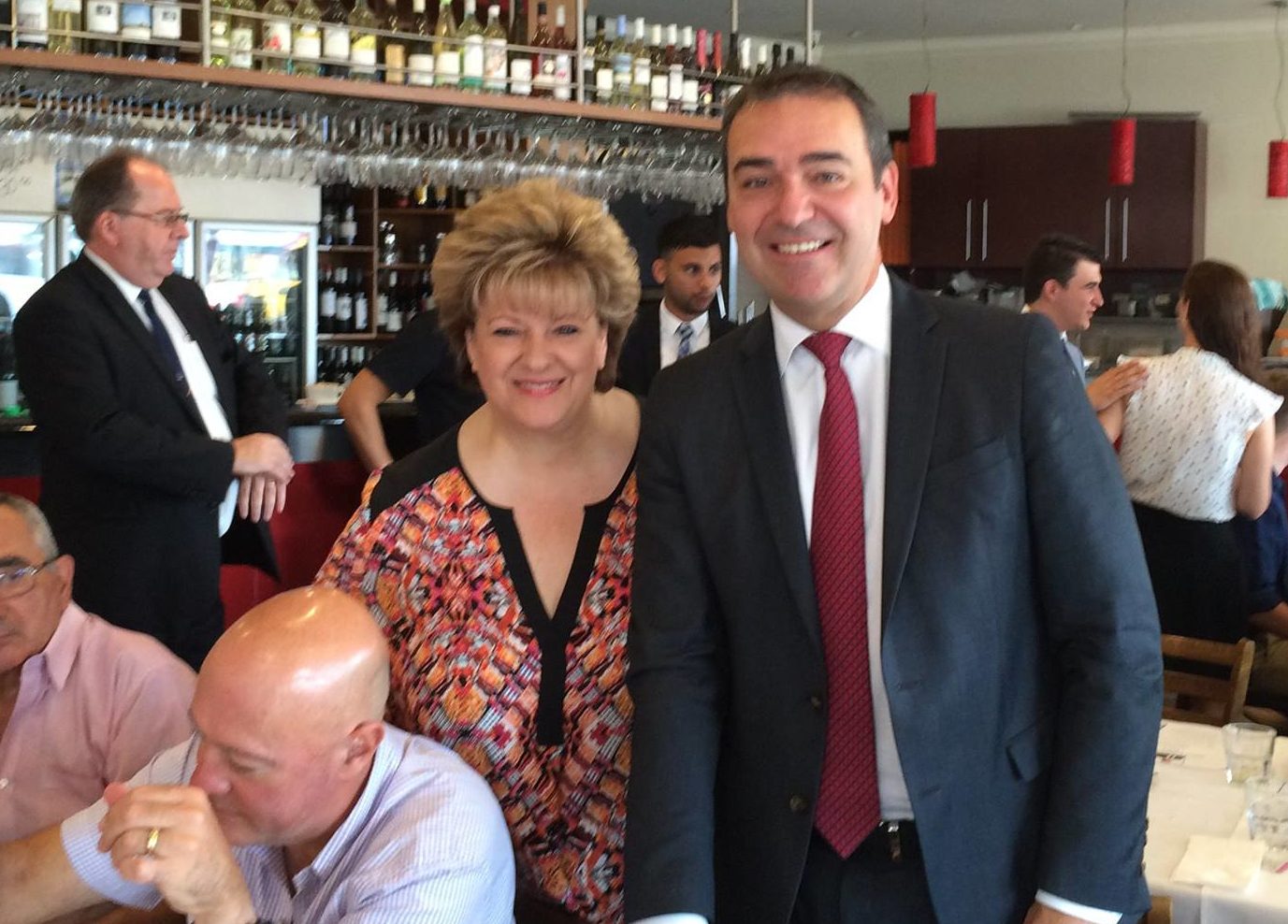 Ryan with Liberal leader Steven Marshall last year. The original Facebook caption for this photo read: “Great turn out this morning for the Hartley Torrens business breakfast to listen to Steven Marshall deliver some inspiring words.”

Ryan has also twice run unsuccessfully for Liberal preselection in Hartley, including against Tarzia in 2012.

She now joins a crowded field for the seat: beyond the three headline acts, the Greens and Dignity are also contesting, with Lauren Zwaans and Rick Neagle respectively.

The Australian Conservatives last week announced former federal court judge Stuart Lindsay would contest the seat for them, only for him to withdraw his candidacy two days later.

It’s understood the party will announce another candidate later this week.

Ryan says she is “particularly angry at the amount of money that’s been thrown at the electorate because of the election”, having spent, she argues, much of her decade on the council lobbying for investment.

Despite both major parties now commiting funds for a long-awaited Park’n’Ride at Paradise Interchange, she says it is not enough.

“There’s no point putting in half measures now, only to rip up the whole thing again when the carpark is still not addressing the needs and is not fit for purpose,” she said.

Ryan says she joined the Conservatives “for a very short time… more out of interest because I was starting to have some reservations about remaining as a member of the Liberal Party”.

“I responded to a few articles and had meetings with a few of them, but it was not exactly where my philosophy and values lie at the moment so I let it go,” she said.

She concedes she was embittered after the preselection snub, but says: “I’m not going to go into the details of that.”

“Clearly I’m not one of those people that says ‘how high’ when powerbrokers say ‘jump’, and if you don’t take what they say as gospel, and have an alternative view, that’s not looked upon favourably… so when preselection comes around of course you’re not going to get it, because that’s the way it works.

“They have the power – people don’t ascend on the basis of merit, and that was quote clearly told to me by one particular person, but I won’t name any names.”

However, she insists, “that’s not the reason I’ve left the party”.

“Just the direction they’ve gone in this election is disappointing, a focus on short-term strategies and easy targets, which doesn’t address the issues we have in this state.”

“The state is one big money pit – and it’s taxpayer money – and there’s no accountability or transparency,” she said.

“I’m totally disgusted with the whole process and I’ve just had enough.”

Labor insiders insist Ryan’s candidacy is entirely designed to take independent votes away from Xenophon in the tightly-run race for Hartley.

Xenophon himself told InDaily: “I’d like to know what discussions she’s had with the Liberal Party.”

“I think Marijka Ryan and Vincent Tarzia and the Liberal Party need to tell us what discussions they’ve had and what arrangements have been made for preferences… I think people need to question her claims that she’s running as an independent.”

But Ryan insists she will run an open how-to-vote card, saying “people are intelligent enough to make up their own minds”.

The 44-year-old, who worked briefly as a consultant in the UK Cabinet Office, will take on Liberal David Pisoni for the inner-southern suburbs seat.