Political donations over $5000 are to be published on the state electoral commission’s website regularly from now until polling day, under new disclosure laws that were introduced in the past year.

But the site’s disclosure portal appears somewhat ad hoc, with various donations apparently recorded twice and several sums appearing that are well below the reporting threshold, making it difficult to obtain a clear picture of who is bankrolling the parties’ campaigns – and to what extent.

In recent days, a glut of payments have appeared on the site made by the SA branch of the Australian Hotels Association – a regular donor to both Labor and Liberal parties – including significant donations to Cory Bernardi’s fledgling Conservative party.

It comes as Xenophon yesterday came under fire for his forthcoming pokies policy, with SA Best confirming what its leader has long intimated – that its focus would be on harm minimisation rather than a blanket ban. 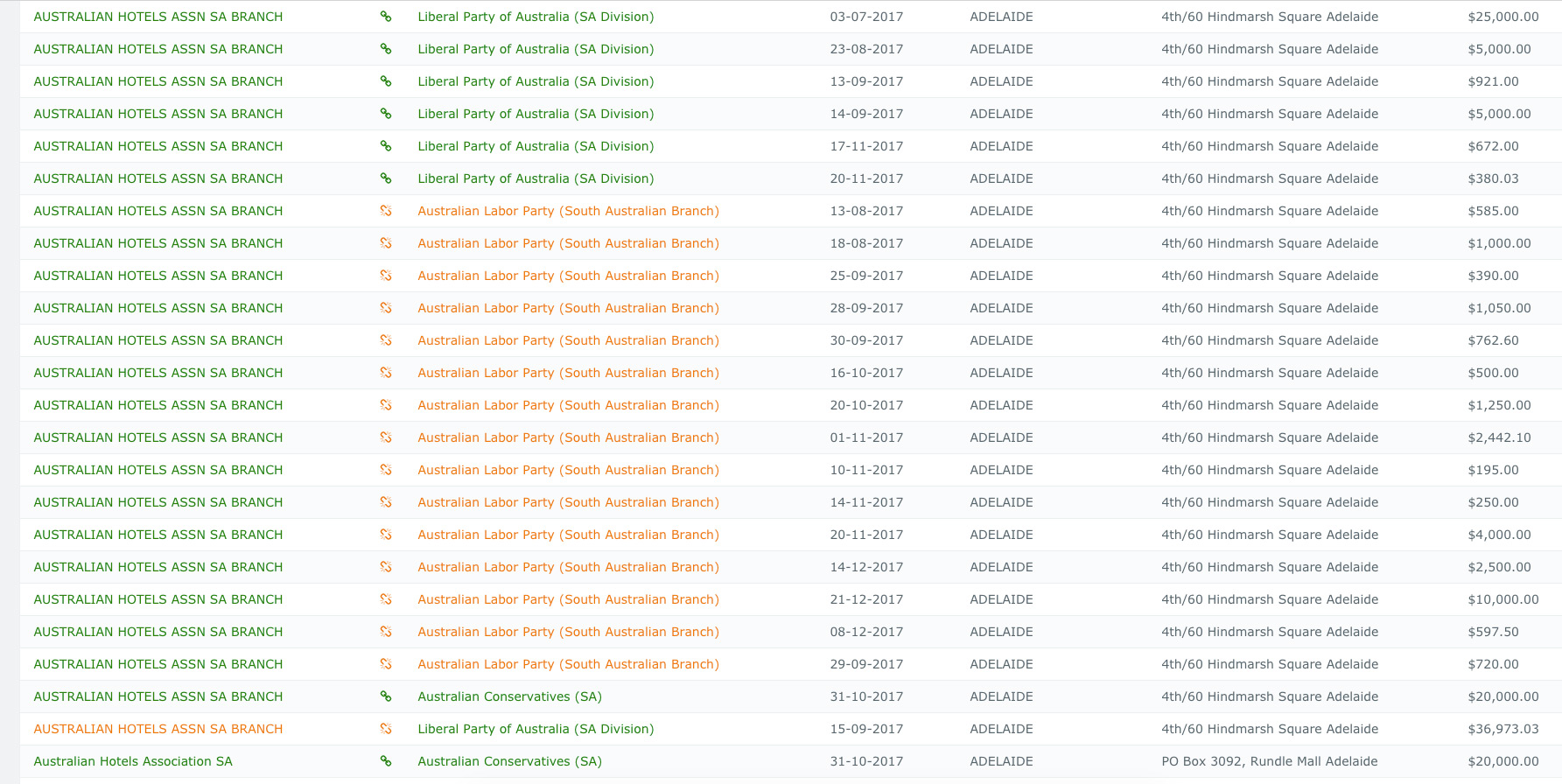 A screenshot of the ECSA donations portal, which has been updated this week.

Asked to clarify the political donations of his organisation, AHA SA boss Ian Horne told InDaily that over the 2017 calendar year the lobby group had provided $43,534 to the ALP, $49,973 to the Liberal Party and $20,000 to the Australian Conservatives – an amount that is recorded twice on the ECSA portal.

He said the AHA had a policy to declare every donation, however small, with amounts as low as $250 and $390 likely to be payments made at fundraising events by SA Progressive Business – Labor’s fundraising arm, which also charges local businesses $12,000 for an annual membership.

Horne said membership of the Liberals’ fundraising body, FutureSA, cost $25,000 a year, but that the AHA tried to ensure the split between both major parties each year was “roughly 50/50”.

“My standard answer to all this is if they stop asking, we stop giving,” he said, pointing out both major parties held “constant fundraisers”.

“What do we expect from it? We expect to be treated with respect, to at least appreciate the contribution our industry makes and expect them to communication with you – the good and the bad news… you’d have to say as a regular donor to the political parties, we may have been no better or worse off if we’d done nothing [but] it’s part of the [parties’] DNA that they do fundraising and they seek support.

“There are risks involved in doing it and not doing it.”

He said he had not spoken to the Conservatives about their position on gaming.

But he said while “certainly they’re a new party… they’ve been a stable party in this state in various forms for some time”.

“We made an assessment in the interest of stability of government, and were happy to support them,” Horne said.

Horne conceded the AHA had skin in the game at next month’s poll, with Xenophon widely expected to wield the balance of power in the Lower House – and potentially the Upper House as well.

“The reason we’re so concerned about this election is that Xenophon has made it his life mission to do our industry great damage… that’s why we want stable government.

“Putting our interests aside, this is a recipe for chaos.

“Our sense is a hung parliament of either colour is a disaster for the state… I’d imagine a whole range of businesses interstate would be looking at SA and the outcome on March 17, so it will have an impact on whether it’s a risky prospect to be here [so] it strikes at the very confidence of the state not to have stable government to attract industry and jobs.”

Xenophon said he expected there would be “potentially hundreds of donations under the disclosure threshold from pokies operators and associated entities”.

“I’m not surprised – I expect there’ll be a lot more but the fact is, however much money the AHA spends on trying to defend their indefensible position with harm caused by poker machines, the fact is there are many tens of thousands of South Australians who have been hurt in a direct sense by poker machines… that’s something no amount of donations can sweep away,” he said.

Xenophon defended his stance on poker machines – after the Greens stole a campaign march on SA Best with a commitment to remove them from pubs and clubs – saying “it’s a question of how do you transition away from poker machines in the most effective and feasible way possible”.

He reiterated that the “poker machine industry in SA is very different from Tasmania”, where the state Labor Party has committed to a similar ban – but all the gaming machines are operated by a single company, which also owns the casino.

He insisted his policy would offer “a credible alternative to reduce the pain caused by poker machines…and I think that’s why the industry is so afraid of it”.

“The proof is in the pudding – that’s why they’ll be targeting SA Best, not the Greens – because they know we pose the biggest threat to slash the level of gambling addiction,” he said.

As expected, internal stakeholders were a major contributor to the SA ALP, with recent payments including a lump-sum of $150,000 from the Shop, Distributive and Allied Employees Union, which controls the Right faction, and sums totalling $36,000 from the United Voice union, which oversees the Left. There are also two donations of $10,000 recorded on the same date in September from the “Southpaw Social Club”, which is understood to be the effective trading name of the Left PLUS (Progressive Left Union and Sub-Branches) faction.