However, the potential state political kingmaker was ambiguous about suggestions he may waive the controversial $20,000 campaign fee for individual candidates – a prospect that could prompt some unrest in SA Best ranks.

The confirmation dredged up bitter recriminations, with decades-old allegations and bad blood between Antonio and Hughes dragged into the public spotlight.

The announcement also stole the limelight from Jay Weatherill’s Whyalla whistlestop, with the Premier declaring Antonio the latest in “a very large number of Liberals running for the Xenophon party”.

“It looks like the Xenophon party doing a fair impression of the Liberal Party up here in Whyalla,” he told reporters.

But InDaily can reveal Xenophon’s sights have been set on another high-profile Liberal figure. Former Port Pirie mayor Brenton Vanstone – an unsuccessful nominee for the Liberal Party candidacy to take on independent Geoff Brock in Frome – has confirmed he has been lobbied as recently as last week to run for SA Best.

It’s understood these include direct conversations with Xenophon.

“I’ve definitely had some approaches, some concerted and serious approaches from SA Best,” Vanstone told InDaily.

However, he said, he had all-but decided to spurn the overture because his heart was still “blue by hue”.

Vanstone is the third mayor known to have spurned SA Best’s advances, with InDaily previously revealing another Liberal stalwart – Wattle Range mayor Peter Gandolfi – knocked back an offer to run in MacKillop and Tea Tree Gully incumbent Kevin Knight refused to run in King because he likes the O-Bahn extension too much.

Vanstone said while “I was not successful in my preselection for Frome… I’d say my allegiances still lie with the Liberal Party”.

Nonetheless, he was not entirely positive about the Opposition, lamenting its inability to retain “inordinately brilliant” Port Augusta Mayor Sam Johnson, who recently joined the SA Best fold as an Upper House candidate.

However, he maintained, “I’d have to say that it would need a realignment of the planets for me to change at the moment, I think”.

“I’ve passed that on to the people in SA Best,” he added.

Vanstone – who says he has fully recovered from a heart attack he suffered last year – left the Liberal fold when he became mayor, replacing Brock in 2009, but “now I’m out of that I’ve re-joined the Liberal Party, and I think that’s where my allegiances lie”.

However, he said he was pleased SA Best had brought a “regional focus” to the campaign, adding “if someone came up with a very powerful regional policy it would make me think again, but at the moment I’m still ‘blue by hue’”.

Vanstone said he didn’t believe the party had “approached anyone else at the moment” in Frome, adding that “a lot of people don’t understand the Geoff Brock factor”.

“They don’t like Geoff Brock in Pirie – they love him,” he said.

“[The Liberals say] a vote for Geoff is a vote for Labor, but a lot of people in Pirie used to vote Labor anyway.”

Vanstone also said “got the impression” he was not required to pay the oft-publicised $20,000 SA Best hopefuls are required to pay under the “Deed for Candidates” each is asked to sign.

Xenophon told InDaily he had “spoken to Brenton on many occasions” but would not confirm he had asked him to run for SA Best.

“I’m not going to respond, except to say he’s a top bloke and was an excellent mayor of Port Pirie,” he said.

As to whether he had offered to waive the campaign fee for Vanstone, Xenophon said: I don’t want to comment on that.”

“The discussion didn’t proceed very far, so that’s quite hypothetical.”

However, the suggestion waiving the controversial fee was on the table could prompt unrest with other SA Best hopefuls. It’s understood several, including drug services advocate Kate Amoroso in Mount Gambier, have baulked at the demand for cash – with Xenophon last week suggesting it was now unlikely he would run a candidate in that seat, which insiders from both major parties consider winnable for SA Best.

“It’s very important to fund the campaign,” he said today of the candidate fee, adding that “we’re still talking to people in the South-East”.

However, he appeared to suggest the $20,000 impost was no longer set in stone, saying it was “axiomatic that you won’t have the same level of funding” if you didn’t contribute.

“In high profile seats we’ll do everything possible to make sure they’re funded… it’s a question of doing what’s fair in terms of running a good campaign and being fair to other candidates as well.

And it was a tough initiation for the start-up campaign in Giles today, with Labor taking a hardline approach against Antonio’s candidacy.

Weatherill told reporters “we understand that [Antonio] also had a nomination in to run for the Liberal Party and then withdraw that nomination” declaring him to be “just another Liberal.”

Antonio denied this, telling InDaily he “was a member for a very short time – probably six weeks, if that”.

“I wasn’t satisfied with their policies so I made a decision at the time… I resigned and I went to SA Best,” he said.

But Antonio’s candidacy was also dogged by references to him made in parliament – under privilege – by former Democrats MLC Ian Gilfillan in 1992.

The Hansard extract is readily available via a Google search and was not provided to InDaily by any third party.

Gilfillan raised allegations concerning Antonio and another then-councillor, and their “alleged involvement with the sending of a racist fax with a heading ‘Licence to shoot Aborigines’”.

He also detailed other charges he alleged they were facing.

“Last week I received a plea for help from Whyalla City Councillor Eddie Hughes following what he alleged was a series of threats of intimidation and political interference made against him by Councillor Tom Antonio,” Gilfillan told parliament.

“At a council meeting on 16 November, Councillor Hughes attempted to move a motion to have [the two] councillors stand aside from council pending the outcome of the court cases against them.

“Councillor Hughes alleges that, prior to the start of the meeting, Councillor Tom Antonio approached him and told him that he had been ‘speaking with an old friend of yours’.”

He said he then referred to a police officer with whom Hughes had had an “unfortunate” involvement, leaving him with “some animosity” towards the officer.

“Councillor Hughes alleges that Antonio then threatened him by saying, ‘If you go ahead with this, certain things will happen to you.’” Gilfillan continued.

It has been reported previously that Hughes received a seven-day suspended prison sentence after being found guilty of assaulting a police officer, resisting arrest and loitering in 1983. He was also reportedly at a 1977 protest, for disorderly behaviour, resisting arrest and offensive behaviour. Both allegations were brought to light while he was candidate during the 2014 election campaign. 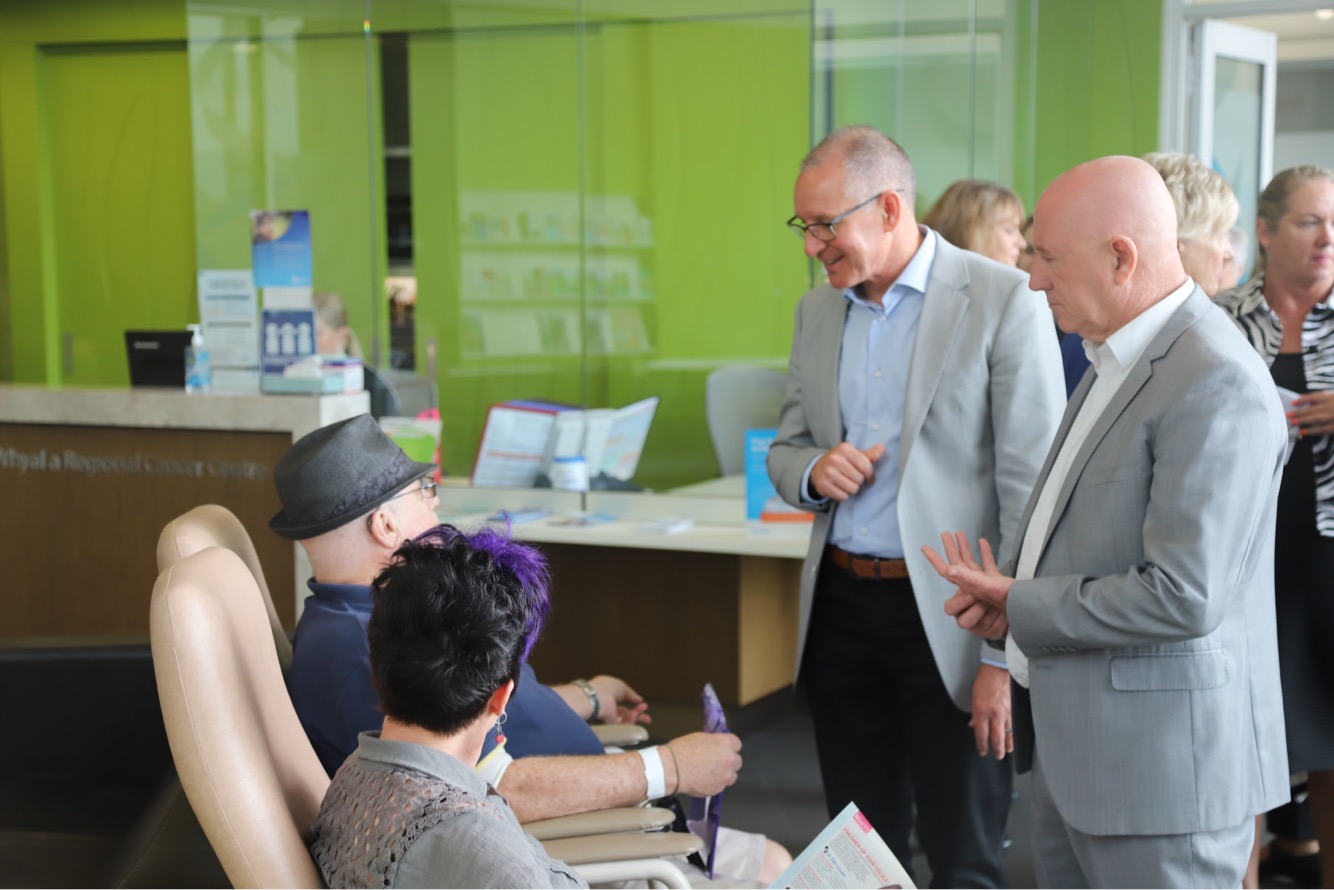 Antonio today strongly denied ever having faced any charges, let alone any convictions, and forcefully denied any knowledge of – or involvement in – the “racist fax”.

“It’s a figment of his imagination,” he said.

He said he had “no knowledge” of the fax.

“It had nothing to do with me,” he said.

He said “the police came in” at the time but insisted nothing came of the inquiry.

“If anything comes of that, or anyone makes those allegations, I’ll be taking legal action… it’s totally false and malicious,” he said.

“I’ve got four businesses across three different towns… if a fax was sent, I’m not aware of it.”

He added: “I don’t have a problem with Eddie Hughes.”

“I’ll work with Eddie or anybody who wants to work with me for the prosperity of the community and for the region of Giles,” he said.

“My door’s always open… I’ve nothing bad to say about Eddie Hughes.”

Xenophon said he was “very well aware” of the allegations detailed by Gilfillan, and was “convinced that Tom had nothing to do with this”.