The bombshell change was passed on the last parliamentary sitting day last month, after the Government convinced key crossbenchers to support a Greens amendment – first reported by InDaily – to abolish the clause in the constitution relating to electoral fairness.

The key votes – those of Dignity MLC Kelly Vincent and Advance SA’s John Darley – were contingent on legal advice that the Government insists supports its claim that the change does not require a referendum – but the advice has not been made public, nor was it provided to the MLCs.

The electoral fairness clause, introduced in 1991, held that future boundary commissions must “ensure, as far as practicable, that the electoral redistribution is fair to prospective candidates and groups of candidates” such that if a party garnered more than 50 per cent of the statewide vote “they will be elected in sufficient numbers to enable a government to be formed”.

The Liberals have only won two of the six elections since – despite losing the statewide vote only once.

The provision also alludes to candidates “whose political stance is such that there is reason to believe that they would, if elected in sufficient numbers, be prepared to act in concert to form or support a government”.

But Greens MLC Mark Parnell moved to have the section struck from the Act on the basis that the clause was unworkable and an anachronism given the decline of the two-party hegemony.

The Government determined, on the last sitting day before the March election, that this could be done by a parliamentary vote, without the need for another referendum.

In a statement to InDaily, Attorney-General John Rau said the Government “received advice from the Solicitor-General on Mr Parnell’s amendment”.

“We will not be releasing that legal advice,” he said.

The Liberals are set to revisit the change if they win Government – and are likely to challenge it in the courts even if they don’t.

Shadow Attorney-General Vickie Chapman told InDaily that while the matter had not been resolved by the party-room, “my recommendation will be that after the election we examine and obtain competent legal advice to ascertain whether what they’ve done is legal, because we can’t have a question mark hanging over future boundary commissioners – with or without a fairness clause.”

Key Opposition figures are convinced the fairness provisions are entrenched in the constitution, by virtue of the 1991 referendum through which they were introduced.

But InDaily can reveal that senior Liberals at the time argued a referendum wasn’t needed to introduce the fairness clause in the first place, citing the “best possible legal advice”.

According to Hansard, former deputy Liberal leader Stephen Baker told parliament in 1990: “I make clear that a vast amount of legal advice was sought on the matter of whether changes to the criteria under the constitution would constitute such a change that would require a referendum… we have been advised on the best possible advice from the Crown and elsewhere that that would not be the case.”

Baker was a member of the parliamentary committee established to consider electoral reforms that would ensure the party with a statewide majority holds power, after the Liberals failed to win a majority of seats in 1989 despite snaring 51.9 per cent of the two-party vote.

It’s understood from the debate at the time that the referendum was deemed necessary not to entrench the fairness provisions, but to mandate a boundary redistribution after each election.

Former Liberal leader Bruce Eastick, who was also on the committee, said during debate at the time: “This is the trigger point to bring about the referendum.”

“We have opted quite deliberately to take the referendum in the first instance rather than go to the next election on the present boundaries, which we believe would be grossly unfair to any candidate, whether they be members of a particular party or independents,” he went on.

Baker told InDaily that while “I said at the time it should be a simple change to the constitution act”, he believed the clause was subsequently entrenched because it was introduced during the referendum process – and should, therefore, require a referendum to subsequently remove it.

“I was of the view at the time that it did not need a referendum, but having inserted it… the bottom line for me was by putting it there by referendum, it cemented that proposal as part of that.”

The Liberals are seething that the clause has now been removed after the first boundaries commission in 25 years that gave the “electoral fairness” principle more credence than the “one vote, one value” requirement under the Act – which requires each electorate to contain roughly the same number of voters. The Act allows a 10 per cent tolerance either way – a quantum the most recent commission used to dramatically redraw the boundaries in a bid to achieve electoral fairness.

The Labor Party unsuccessfully appealed the move to the Supreme Court, arguing the redraw offended the “one vote, one value” principle.

To add to the Liberals’ woes, the March election – the only one since 1991 they believe will genuinely reflect the “electoral fairness” principle – will be in any case skewed by the emergence of Nick Xenophon’s SA Best, which this week outpolled both major parties in a statewide Newspoll, with 32 per cent of the primary vote.

Former Labor heavyweight Terry Groom, who was also on the 1990 inquiry, insists “it was never intended by the select committee for the fairness clause to be entrenched” in the Act.

“That was made clear by Stephen Baker at the time,” he said.

“The fairness clause was put in by the Libs as a temporary fix, but with single member electorates it was never going to work.”

The change was intended to be reviewed after the 1993 election, but it was never done, according to Groom, “because they got a big majority and didn’t worry about it”.

“There’d been no point having a review if it was entrenched,” he insists.

“The only thing that was really entrenched was changing to having redistributions after every election.”

He insists the fairness clause was “never intended to override ‘one vote, one value’”.

Baker’s contribution in the 1990 debate also recognised the importance of the principle that each electorate should have a similar number of voters.

“[Voters] may not like politicians but they would recognise that some people are treated very unfairly under the current system,” he told the parliament at the time.

SA's electoral fairness clause a "failure", says the man who drafted it

“They know it is not right that there are 16,800 electors in one seat and 27,800 electors in another seat… they know that some electorates because of their size and expansion have trouble getting the same quality of representation as other electorates.

“The referendum will bring forward the redistribution date to bring the numbers back into line with something more acceptable.”

Indeed, a fact sheet released by the State Electoral Office before the 1991 referendum doesn’t explicitly mention “electoral fairness” at all – other than a passing reference to arranging electorates “in such as way as to enable (as far as practicable) a political party which obtains more than 50 per cent of the statewide votes to form a government”.

Instead, the fact sheet emphasises that the change proposed at the referendum is “to ensure that the number of electors in each (seat) remains, as near as practicable, equal”.

The document is significant, as it implies that the 1991 referendum was, as far as the voting public was concerned, more about entrenching ‘one vote, one value’ than achieving ‘electoral fairness’. 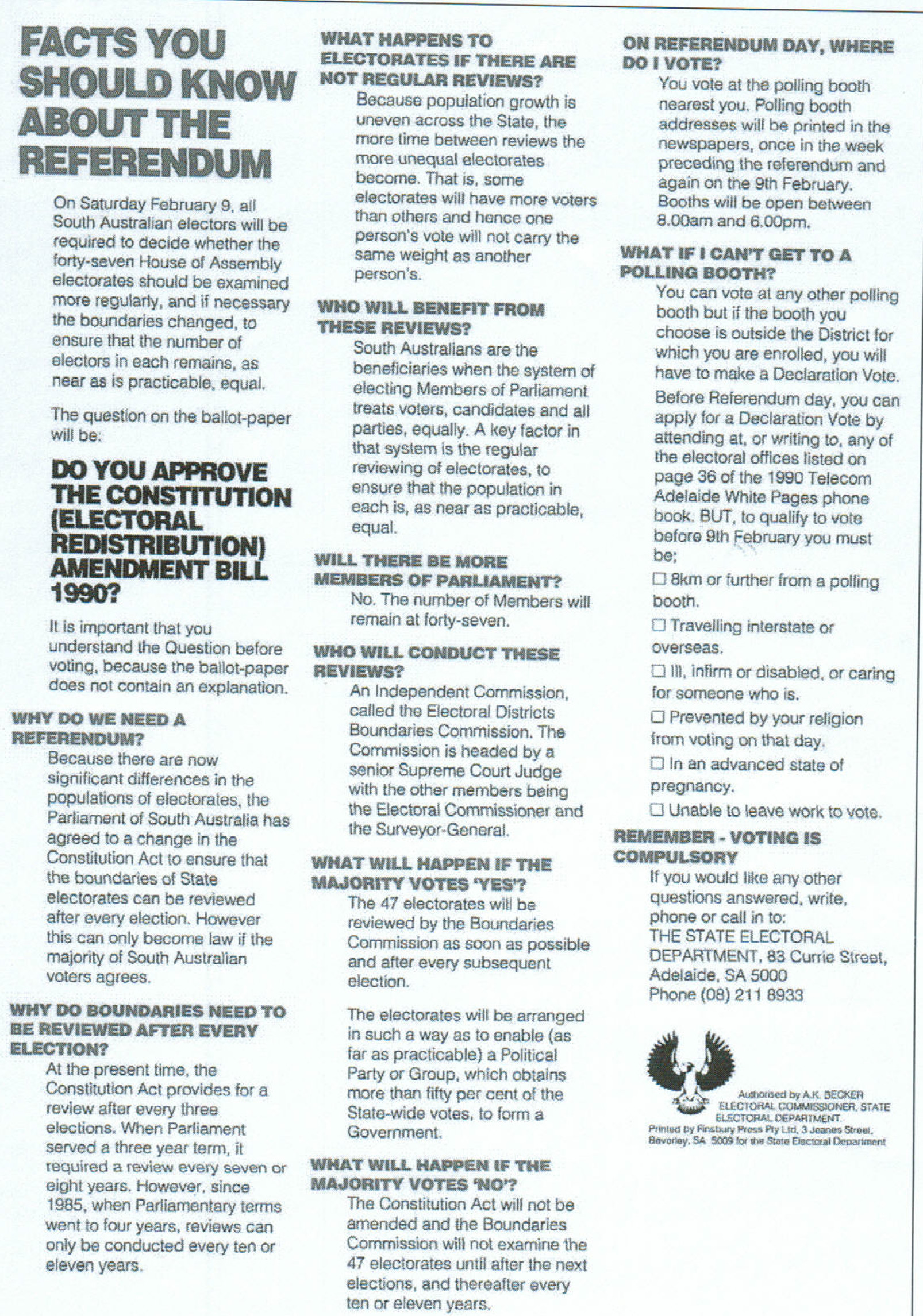 Parnell told InDaily he was never briefed on Labor’s specific legal advice that changing the act did not require a referendum.

“I took them at their word but it wasn’t an issue for me because I was going to bring it to a vote anyway,” he told InDaily by text message.

“I was expecting that a referendum was needed, so it was a pleasant surprise to find it wasn’t.”

Nonetheless, he said he “fully expects a legal challenge after the next election”. 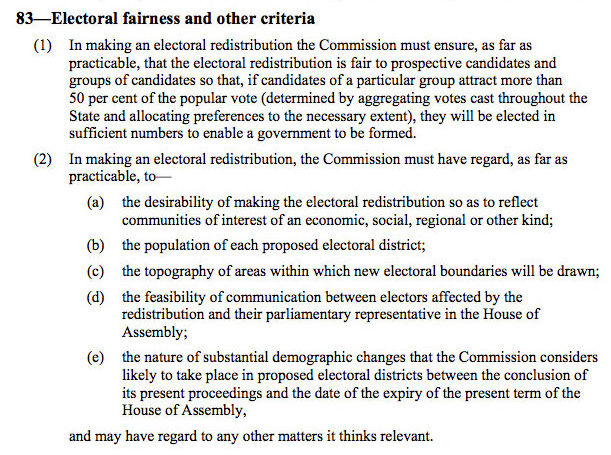 HOW THE ACT READS NOW 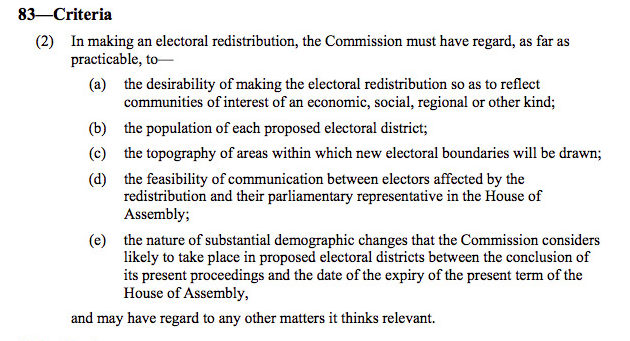