Wattle Range mayor Peter Gandolfi – a former Liberal state candidate and senior adviser to premiers John Olsen and Rob Kerin – maintains Pyne, the federal Defence Industry minister, suggested to him in a private conversation that he should run as an independent in Barker, against the party’s right-faction candidate Tony Pasin.

Pyne has consistently denied the allegations, and it was reported today in The Australian that he was cleared of any wrongdoing in a unanimous vote of the state executive this week.

But InDaily has been told the vote merely confirmed that “the matter has been looked at and we’re not going to take it any further”, given it relied upon the testimony of two individuals – each of whom gave conflicting recollections of events.

“The party made inquiries and decided not to proceed any further,” an insider said.

There are conflicting accounts of the specific motion voted on, with another insider saying the executive determined Pyne had “no case to answer” after an investigation found “no evidence of wrongdoing” and that the matter “not be proceeded with any further”.

Pyne told The Australian last night he had “always supported the endorsed Liberal candidate, which is more than those Liberals can say who supported Michael Pratt against me in 1993”.

He did not comment further today, insisting it was a non-issue and “I’ve wasted enough time on it already”.

But Gandolfi maintained the reported version of events reflected his recollection, telling InDaily: “I’ve never disputed what’s been reported in the press.”

He confirmed he had been contacted by the Liberal Party over the alleged incident, but was “not aware of any outcome following that”.

The investigation was made at the request of Barker Federal Electoral Conference president Stuart Andrew, who told InDaily: “I was told by the [state] president [Olsen] that the request had been carried out and that as a result of state executive investigations no further action would be taken.” 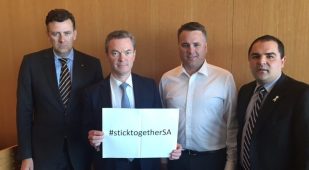 Pyne asked me to run as an independent against the Libs, former candidate confirms

“That’s fine for me, on behalf of my committee,” he added.

“What I said in my correspondence to state executive was there’s a serious allegation made by a serious person… all I wanted was for those accusations to be investigated.”

Asked what he made of the fact Gandolfi maintained his version of events, Andrew said: “That’s not anything for me to comment on.”

“As FEC chair, all I wanted to do was make sure the allegation was investigated… we’ve done what any responsible FEC, having heard those reports, would have done.”