Today’s Australian newspaper reported that Pyne, who was then the Manager of Opposition Business, sought to undermine the conservative-faction Liberal candidate in Barker by suggesting an independent stand against him.

The report, by Janet Albrechtsen, cited sources saying that Pyne rang Wattle Range mayor Gandolfi – the Liberals’ candidate for Mount Gambier in 2006 – and “asked him to run as an independent in the upcoming federal election against the preselected Liberal candidate, Tony Pasin”.

Gandolfi – who has previously worked as a senior media advisor to Liberal premiers John Olsen and Rob Kerin – refused, the paper said.

Gandolfi declined to comment to The Australian, and did not wish to make a statement when contacted by InDaily today.

However, he confirmed he “did not dispute” the account.

Pasin also declined to comment today, but said he stood by his comments in The Australian, which confirmed he first heard about Pyne’s alleged approach earlier this year.

“The person who told me said, ‘Mate, I’m about to tell you something that is going to rock your world’,” he reportedly said.

“The person expected me to be shocked. Sadly, I wasn’t shocked because I have witnessed attempts to damage career prospects of young conservatives over a long period of time.

“I have become all too familiar with this kind of Machiavellian behaviour.”

Pyne, who is overseas and was unable to be contacted today, has previously denied the approach.

“It’s not true,” he told Albrechtsen.

“I have never suggested to anyone that they run as an independent against the Liberal Party.”

He said he had no memory of calling Gandolfi on the date in question, although “I know I’ve spoken to [him] many times over the years because he’d been around the Liberal Party for a long time and I have talked to him about many issues, about preselections, because he had been a candidate, most recently for [the state seat of] MacKillop”.

“But I have never asked anybody to run against an endorsed Liberal candidate as an independent,” he reportedly said.

Sources have told InDaily Pyne’s alleged approach stemmed back to bad blood between Gandolfi and Pasin over the latter’s endorsement of Mount Gambier councillor and former mayor Steve Perryman to run for the Liberals in Mount Gambier at the 2010 state election.

Gandolfi, who had been the candidate against Labor-aligned independent Rory McEwen in 2006, put his hand up again for the 2010 poll.

But Pasin backed Perryman, fearing if he lost he would run as an independent and win the seat with the support of McEwen, who was retiring.

In the event, the Liberals still lost the seat, with independent Don Pegler surfing in by 0.4 per cent on preferences.

Perryman, who declined to comment today, has since left the Liberal Party.

Insiders say the ballot left residual tensions between Pasin and Gandolfi, but it’s understood their relationship has since thawed, with the Barker MP backing the Wattle Range mayor in his recent unsuccessful tilt for endorsement in MacKillop.

Pasin, a staunch conservative, originally stood for preselection against incumbent Patrick Secker in 2013, winning party endorsement by an overwhelming 164 votes to 78.

Secker was elected as a conservative faction member, but had endured a turbulent relationship with his own faction, having seen off a 2006 challenge from a former adviser to Right powerbroker Nick Minchin – current Australian Petroleum Production and Exploration Association lobbyist Matt Doman. Against Pasin, Secker had the support of the moderate faction, with Pyne telling The Australian after the preselection ballot: “Patrick is a valued colleague of mine and a friend and I’m disappointed for him that he’s not been successful, but I welcome Tony Pasin to the team.”

Party insiders responded angrily to today’s revelations, with one telling InDaily: “You’ve got the Manager of Opposition Business out there trying to actively lose a seat for [then-leader Tony Abbott] in… a hung parliament – it’s just bizarre.”

Today’s claims follow a series of damaging leaks about Pyne in the national media.

Last week it was reported he had told a meeting of MPs and party powerbrokers that if his Sturt fortress was abolished in a forthcoming re-draw he would seek preselection in neighbouring Boothby at the expense of 39-year-old first-term factional opponent Nicolle Flint.

Pyne has since strongly denied the allegation.

It was also revealed he sought to enlist left-wing activist group GetUp! to campaign for Malcolm Turnbull against a Liberal leadership challenge by Abbott in 2009 – which Pyne confirmed.

One party insider suggested the revelations could suggest an escalation of a simmering factional feud in SA, sparked by the looming federal redistribution.

“I wouldn’t be surprised if it was a concerted effort… I think it’s the first sense of [a factional war],” the source said.

With exquisite timing, the Australian Electoral Commission today stepped up its push the transform SA’s federal electoral map, inviting members of the public to submit written suggestions about which seat should be abolished. 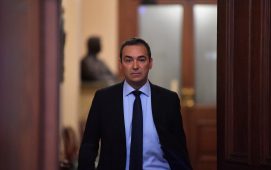 Commissioner Tom Rogers, the chair of the Redistribution Committee for SA, said in a statement that recent population and enrolment growth in some areas of the state would “likely see significant changes to existing boundaries”.

“The decrease in SA’s entitlement from 11 to 10 members means there will be consequential boundary changes across the state to ensure all divisions meet strict numerical criteria,” he said.

“In addition to numerical requirements, the committee will consider communities of interest, means of travel and physical features of proposed divisions.”