One-time Police and Energy Minister Wayne Matthew today confirmed he had picked up a nomination form, and was giving serious consideration to running for preselection in Davenport, which sprawls through Hills districts in the southern suburbs.

It’s a region likely to be strongly targeted by the Nick Xenophon Team, keen to capitalise on the local popularity of fledgling federal MP for Mayo Rebekha Sharkie.

But the prospect of a Matthew comeback has prompted a vicious backlash within the notoriously-divided SA Liberal party, with senior sources telling InDaily his candidacy would be “an unmitigated disaster”.

Matthew told InDaily he had been “approached consistently in the last two years by business people and people in the party” to run.

“It’s true to say I’ve continually discounted that over the last two years, but approaches over the last three months I’ve been considering more seriously,” he said. 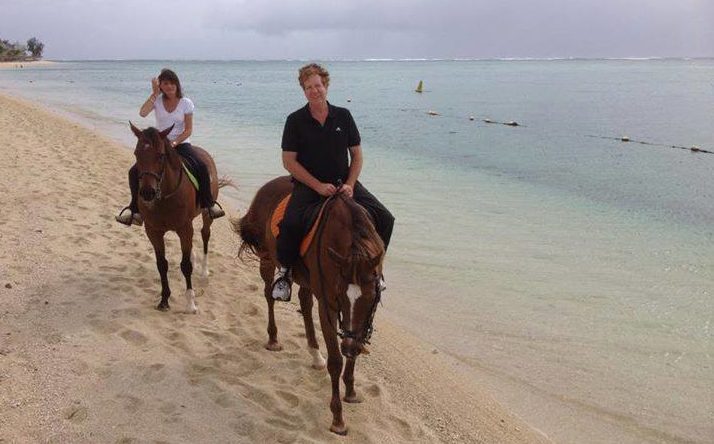 Will Wayne Matthew be the Liberal Party’s white knight in Davenport? Photo: Facebook

He said he was “still considering [his] options” but has a “very short period of time” to do so, with nominations closing on Friday.

“If I were to make [that] decision it would be out of absolute respect for Steven Marshall,” Matthew said.

“I think what he’s done with the Liberal team is absolutely extraordinary; he’s resolved the problems of the 1970s that were very active when I was an MP.

“I was incredulous in the time I served in parliament that battles of bygone eras were still being fought in the parliament of the day.”

Matthew shocked many in the party when he retired, aged just 48, at the 2006 election.

Fellow frontbencher Angus Redford stood in his marginal seat of Bright in a switch from the Upper House that was always doomed to fail in the face of the looming “Rannslide” poll, with the seat being picked up by Labor’s Chloe Fox for the next two terms.

Matthew was widely considered to have escaped the sinking Liberal ship for the greener pastures of the private sector, where he has since worked as a lobbyist – currently advocating for Demographia, a pro-urban-sprawl think-tank patronised by former Family First senator Bob Day.

But he now insists he quit parliament out of frustration with the Liberals’ factional infighting, saying he “just wasn’t prepared to waste my time with the factions”.

“That was the main reason I left, because I’m not aligned with any of the factions,” he said.

“I found the factional game-playing absolutely destructive… I was totally fed up with [it], and found a far more productive life working in the private sector.

“I’m completely independent, and I always have been.”

That claim may prompt some raised eyebrows within party circles, with his potential comeback already causing angst in certain circles.

Matthew was dumped from the frontbench in 1996 after John Olsen seized the leadership from factional opponent Dean Brown, whom Matthew had strongly supported.

However, he was later reappointed to the ministry, serving from 1997 until the Liberals entered the political wilderness in 2002, and remaining on the frontbench for a term of Opposition.

Matthew said his ministerial experience was what had prompted the “numerous approaches… largely by people outside of politics”.

“There’s certainly been a concern in business that the Liberal Party have lost a lot of their corporate knowledge, and but for the presence of [Shadow Treasurer] Rob Lucas there’s no-one remaining in the Liberal Party in parliament who has actually served in Government and served in cabinet,” he said.

He argues that when the Liberals came to power in 1993 they retained the expertise of the likes of Brown and Olsen, David Wotton and Trevor Griffin, who had all served in the Tonkin government.

“There’s concern [externally] that they’ll be very slow off the mark without some of that corporate knowledge,” he said, but adding that “I’ve always insisted there are a number of ways I can contribute to that process”.

Wayne Matthew in his days as Administrative and Information Services Minister. Photo: AAP

Matthew shrugged off the backlash, saying: “That always happens.”

“You’re always going to have some who are worried… it could be reasons of self-preservation,” he said.

“They’re probably the leftovers of the old factional problems that had been removed.”

He said “the only reason the Liberal Party is in Opposition is because it tried to cut itself apart”.

“They can lament they got 53 per cent [of the statewide vote] last time [and lost the election], but largely the Liberal Party is in Opposition because it cut itself apart.”

The seat of Davenport has been thrust into the party’s spotlight with rising star and right-winger Sam Duluk vacating the electorate to run against Liberal defector Martin Hamilton-Smith in Waite.

That move was prompted by a likely boundary redistribution that will shift more than 14,000 Davenport voters into the former Opposition Leader’s seat.

Matthew says he has “lived in the current electorate of Davenport for the past 17 years [so] it’s not surprising that people would look at me to consider Davenport”.

While he says he would “only go back if members of the Liberal Party feel it’s worthwhile”, it appears he has done his homework.

He says “whilst the redistribution shows it to be a reasonably strong Liberal seat” on an 8.9 per cent margin, he argues that is an anomaly based on a re-throw of preferences in Bob Such’s former seat of Fisher, which has been all-but abolished under the new electoral map.

Matthew puts the prospective margin at “little more than 2 per cent”, noting that “81 per cent of the electors in the new Davenport are from the old electorate of Fisher”.

“I don’t see this seat as being anything else but an extremely marginal one, and there are probably not too many Liberal Party members more successful than me in the last 25 years in campaigning in a marginal seat,” he said, noting that he “took Bright off the Labor Party, and when I exited the Labor Party took it back again”.

State Liberal president Steve Murray is said to be considering nominating for Davenport himself, although he has consistently refused to respond to inquiries on the subject.

One insider said his approach was causing issues for other prospective candidates, with “a lot of people looking [at Davenport] saying, ‘Is he or isn’t he?’”

“[Once Steve decides his position] that will clarify things for a lot of other people,” the source said.

Meanwhile, Hamilton-Smith has stepped up his campaign for an unlikely re-election bid, with a new Waite newsletter doubling as a political CV for his time on Labor’s frontbench.

The document takes great pains to emphasise his “independence”, saying the former Liberal “accepted an invitation from Premier Weatherill to serve and to represent you as an independent liberal conservative MP in the Labor Cabinet”.

“I am not a member of the ALP. I do not attend party room meetings, caucus or factional tribal gatherings,” the mailout says.

“I work professionally in cabinet to contribute to the decisions that shape our future.”