After Bedford confirmed she would re-nominate for the seat she has held since 1997, Snelling this afternoon confirmed he would also put his name forward, in a move that would see two sitting members face off to become Labor’s candidate.

“I’ve spoken to the Member for Florey and let her know I’ll be nominating to run for that seat,” Snelling said in a statement to InDaily.

As the electoral boundaries redistribution continues to wreak havoc on the party’s preparations for the March 2018 election, Snelling affirmed that “the majority of my current constituents will live in Florey after the boundary redistribution and I’d like to continue to represent those people, as I have done for the last 20 years”.

Bedford had dropped a spanner in the works of the ALP’s preselection machinations, refusing to give up her seat without a fight after Snelling flagged his intent to move in on her patch, in a mammoth factional deal that would also allow fellow right-winger Michael Brown to stand in the Health Minister’s northern suburbs stronghold of Playford.

But Bedford – who was widely expected to join fellow veterans Mick Atkinson, Jennifer Rankine, Steph Key and Paul Caica in retirement at the 2018 election – appeared to effectively kill off the grand plan, announcing in a media release that she will re-nominating for the seat.

“After becoming aware prior to Christmas that Health Minister Snelling was interested in Florey I subsequently informed senior ALP Party officials and PLP [parliamentary Labor Party] members that I would definitely be nominating, so I’m not sure of the origin of any uncertainty or misinformation,” she pointedly said.

“Boundary redraws often present new and sometimes radical changes. It is ultimately up to electors to choose the next Member for Florey to serve them in the parliament.”

Brown issued a statement late today confirming: “I have today nominated for ALP preselection for the seat of Playford.”

“I am doing so because, unlike the Liberals, I believe that the North still has a great future ahead of it – a future I want to be part of creating,” he said.

“Should I be preselected, I know it will be difficult to follow great local members such as Susan Close, Jack Snelling and Zoe Bettison but I look forward to working closely with all three in the future.”

Despite the reference to the Liberals, the obvious omission of Bedford from his list suggests the Opposition has taken a backseat as ALP insiders deal with an escalating internal feud, after a preselection overhaul insiders hoped and expected would be conducted relatively peacefully.

Snelling’s response today is at significant odds with his comments in The Advertiser overnight, when he said the move to Florey was “something I’m considering”, but noted: “There is, however, a sitting Member for Florey [and] a lot will depend on Frances Bedford’s intentions.”

It’s not the first time the maverick left-winger has attempted to cruel her party’s factional designs: she has previously threatened to nominate in the federal seat of Makin if now-incumbent Tony Zappia was not preselected. He was, but the change of plan sent a ripple effect through a raft of other preselections, forcing the ALP to nominate Kate Ellis in Adelaide to maintain its gender quota.

Bedford said in her statement she still had “plenty of issues” to pursue.

“I‘m concerned these issues won’t progress without a strong community voice driving them… I will always represent the best interests of the community I have served diligently for almost 20 years, having entered parliament at the same election as Treasurer Koutsantonis and the Health Minister,” she said. 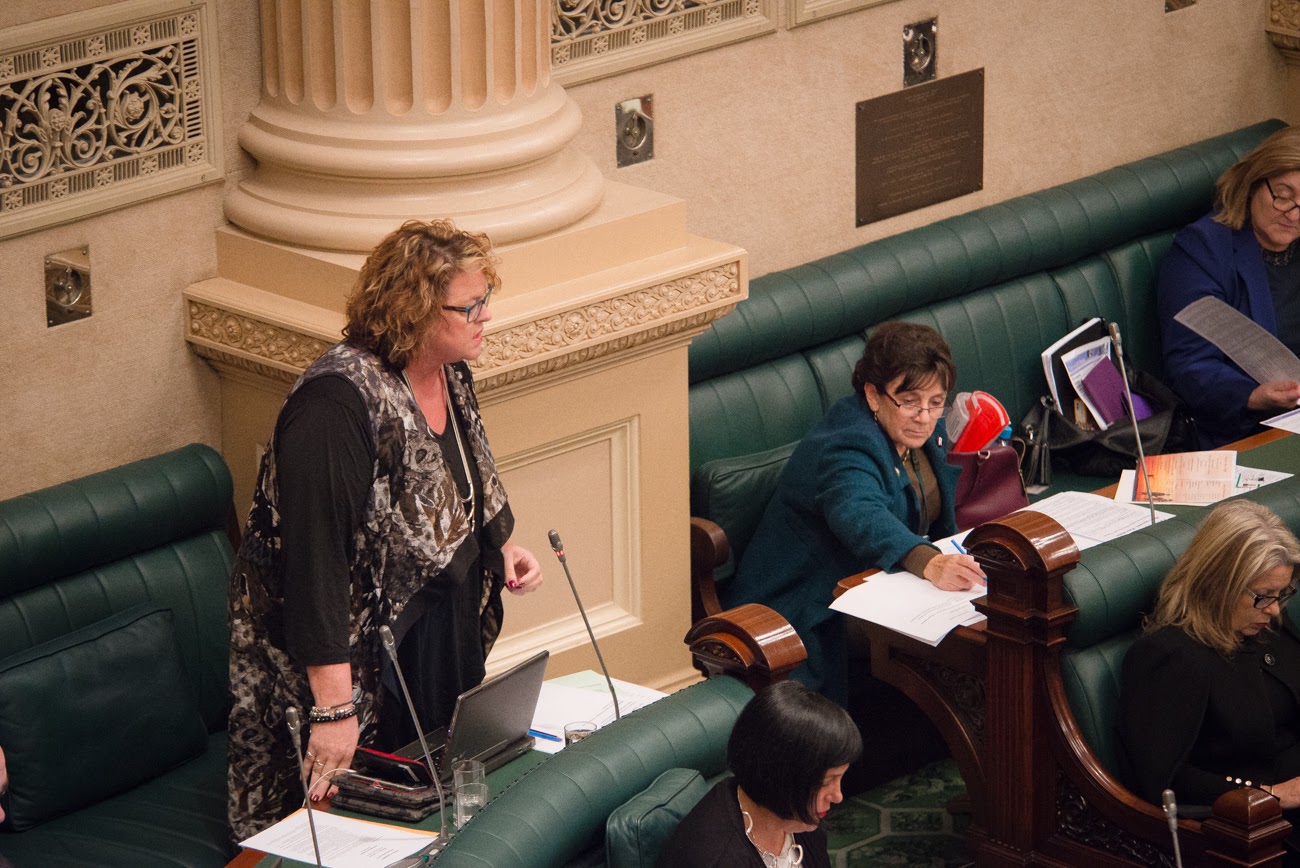 Frances Bedford (rear right) attends to some paperwork in Parliament.

Bedford’s move is just one complicating the Labor machine’s grand designs, with rising star Peter Malinauskas’s bid to swoop into the Lower House hitting a constitutional roadblock that will likely force him to resign from the Legislative Council before year’s end.

But under a little-known provision of the constitution act, he will be allowed to continue serving as a minister from outside parliament.

His portfolio of Emergency Services is likely to keep him busy through next summer ahead of the March election campaign, while he also holds the portfolios of Police, Correctional Services and Road Safety.

Malinauskas has formalised his long-anticipated intent to stand for Croydon when Atkinson retires.

But it’s understood the Labor Party has received legal advice based on the Constitution Act’s stipulation that “no member of the Legislative Council shall be capable of being nominated as a candidate for election as a member of the House of Assembly”.

That means Malinauskas must resign from the Upper House before formally nominating with the electoral commission when writs are issued for the March 2018 election.

Nominations of candidates close on February 26 next year, ahead of the March 17 poll.

However, it seems likely Malinauskas could vacate his seat as early as the end of November, given there will be no further sitting days between then and election day.

But it appears he can continue to serve in the ministry even without a seat, under section 66 of the Constitution Act which states: “No person shall hold office as a Minister of the Crown for more than three calendar months unless the person is a member of Parliament.”

This implies that a person who is not a MP may hold office as a Minister – for less than three months.

It’s unlikely Labor would seek to fill the Upper House vacancy created, given the position would be up for election within months in any case.

A Government spokesman said in a statement that “should Minister Malinauskas be preselected for the seat of Croydon, correct procedure would be followed involving the Minister’s resignation from the Legislative Council ahead of the writs being issued.”

“If this were to occur, it is the Government’s intention the Minister would retain portfolio responsibilities in accordance with the Constitution Act.”

It’s unlikely Bedford’s stance will affect Labor’s three-card trick in the northern suburbs, after the redistribution carved up a glut of safe seats, leaving newcomer Jon Gee with the vulnerable seat of King. Gee has confirmed he will instead nominate today for the neighbouring safe seat of Taylor, whose incumbent, Mental Health and Disabilities Minister Leesa Vlahos, will be shifted to the Upper House – which will again redress a gender imbalance in the Legislative Council with the looming retirement of Gail Gago.

Gee, an AMWU veteran, said he was passionate about serving the northern suburbs with the imminent closure of Holden.

Vlahos told media today she believed “one of the best things I can offer the people of the north is to focus myself in a broader way as an Upper House MLC”.

Ironically this means King (formerly Napier) is currently without a suitor, after it became one of the most hotly-contested prizes in the lead-up to the 2014 election, when Jay Weatherill famously cruelled factional ‘godfather’ Don Farrell’s plan to surf into the seat, replacing retiring frontbencher Michael O’Brien. In the event, O’Brien left, Farrell never arrived (but later returned to the federal senate) and Gee was quickly endorsed as a compromise candidate.

Ironically too, given all the internal wrangling around the new electoral map, the party is yet to find out if its challenge to the redistribution in the Supreme Court is successful, with arguments to be heard before a full bench next week.