Redmond will not contest the state election in March 2018, becoming the fourth Liberal veteran to stand aside in recent weeks, ushering in what current leader Steven Marshall described as a likely “Melbourne Cup field” of young aspirants for the notionally plum seat.

But many colleagues had been hoping and expecting her to stand again as they brace for a third-party challenge from the surging NXT, with the Liberals losing one of their most recognisable faces in an area regarded as vulnerable to the emerging political force.

Redmond, who has pointedly refused to speak to several sections of the media since she stepped down as Liberal leader in 2013, announced her departure in her local paper, The Courier, saying she had decided to step down despite the entreaties of many colleagues to stay.

“I feel relatively energetic at the moment but it is a job that requires 60 hours a week… even as a backbencher.”

She recently told The Advertiser’s Daniel Wills that she was considering staying on with a view to returning to the Liberal frontbench in Government.

There was a consensus within Liberal ranks that she would – and should – stay on to help see off a likely NXT insurgence into the hills seat, which covers the same terrain as the federal electorate of Mayo, recently won by Rebekha Sharkie.

The front page of the Courier is eerily symbolic of the political shift in the district: the exclusive on Redmond’s retirement warrants a sidebar story, overshadowed by a main splash – with photo – about Sharkie pushing for an overnight doctor at the Mt Barker hospital. 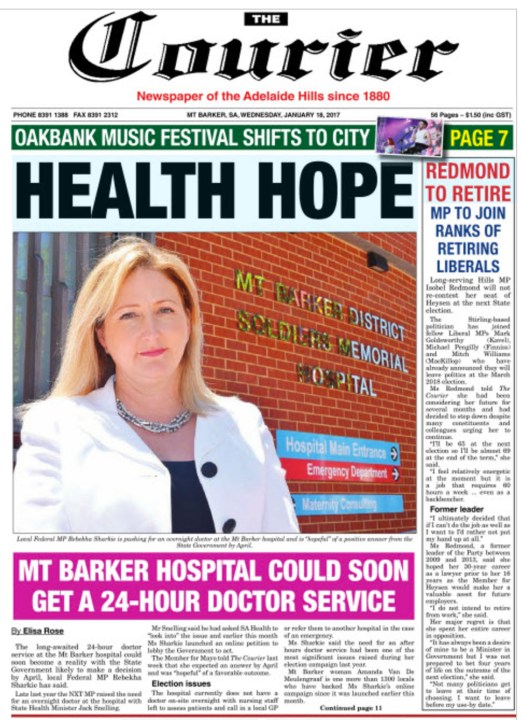 Xenophon – who was unaware of Redmond’s announcement when contacted by InDaily today – said he had “enormous regard” for the “popular and tenacious” former Liberal leader.

“I want the people of Heysen to have a strong, viable alternative to the major parties, in conjunction with Rebekha Sharkie [in Mayo],” he said.

The Greens have also traditionally polled strongly in Heysen, today declaring their campaign for the seat “is now picking up pace”.

“Heysen is Greens’ heartland and at the last state election, the two-party preferred count was between Greens and Liberals, with the Green candidate finishing second, ahead of Labor,” said state parliamentary leader Mark Parnell in a statement.

Redmond said she “ultimately decided if I can’t do the job as well as I want to I’d rather not put my hand up at all”.

Marshall confirmed on ABC Adelaide this morning that Redmond “informed me recently that she won’t be going ahead”.

Marshall joined former Liberal Martin Hamilton-Smith in challenging Redmond’s leadership in 2012, but later served as her deputy and considers her a mentor and confidant.

“It’s a sad day for the people of SA because she’s made an enormous contribution to the parliament and the Liberal Party…and the people of Heysen,” he said. 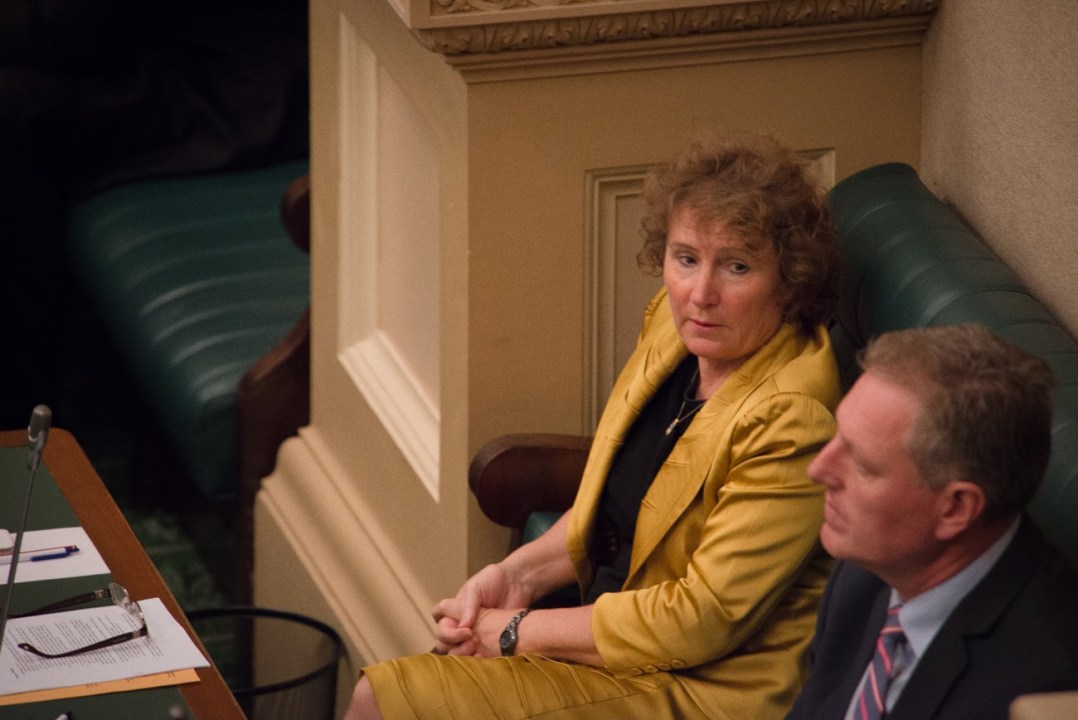 He said the electorate was “a very important seat” and he expected “a Melbourne Cup-type field” of contenders.

“Never before in the history of SA have we had a situation where so many people want change,” he said.

Former Liberal Senator Sean Edwards has recently refused to hose down the prospect of him running in either Frome or Heysen, in the event of Redmond’s retirement.

After Marshall was elected as leader, a pool camera allowed into the Liberal partyroom meeting captured Redmond declaring to colleagues that she would “never” speak to media again – a promise she has largely honoured, despite a propensity to remain in the political spotlight.

Redmond arguably has more reason than most Liberals to feel aggrieved about the state’s contentious electoral boundaries, having led the party to a 52 per cent statewide majority in 2010 – but still falling eight seats short of Labor’s majority. After the subsequent Boundaries Commission refused to significantly redress the shortfall, she launched a scathing attack on then-Electoral Commissioner Kay Mousley under parliamentary privilege.

She initially replaced Hamilton-Smith as leader in 2009 after the ‘Dodgy Documents’ scandal cost him significant party-room support, and became a popular political foil to then-Premier Mike Rann, whose star was on the wane in the wake of the Chantelois controversy. She was re-elected unopposed after the 2010 election, but her fortunes dipped after Labor replaced Rann with Jay Weatherill and received a corresponding poll bounce. Her political decline was hastened when she declared a determination, seemingly on the fly, to cut the state’s public sector by 25,000 jobs in 2012.

But despite frosty relations with the media in recent years, Redmond’s enduring popularity with many in parliament was emphasised by a statement from Labor Treasurer Tom Koutsantonis today, who called her a “worthy opponent that gave South Australian voters real choices during her time in state politics”.

“She has always conducted herself with honesty and integrity and been a fearless advocate for the causes she is passionate about,” he said.

One of those was the establishment of a state-based corruption watchdog, the creation of which she once described as the major ambition of her political career.