The influential SA senator, who started his political career as an independent in the state’s upper house, spoke to InDaily today in the wake of this week’s Essential poll which surprisingly showed the Weatherill Government – after a torrid 2016 – with a two-party-preferred lead over Steven Marshall’s Liberals, 51 to 49.

However, a crucial question in deciding the 2PP will be how the preferences are distributed, with the Nick Xenophon Team sitting on 17 per cent of the primary vote in the final quarter of 2016.

Labor’s primary vote has fallen to 35 per cent, but remains around where it was at the 2014 state election. The Liberals’ primary vote is up to 32, but a way off the near-45 per cent the party garnered in 2014, which suggests much of NXT’s support has come at the Opposition’s expense.

But it’s understood the preference distribution from NXT ballots at the last election – when the party controversially opted to run a split preference ticket – was 60-40 in favour of Labor.

Asked whether the party had decided whether to again run a split ticket in its 2018 state tilt, Xenophon said: “The short answer is, no, we haven’t”.

“Obviously a split ticket is on the agenda again this time [but] that depends on a whole range of factors.”

Xenophon rejected overtures for preference deals before the July federal election, a move Labor claimed would cost him three seats – although his party ended up snaring one of those three, with Jamie Briggs losing his hills stronghold of Mayo to Rebekha Sharkie.

Mayo’s footprint covers the same terrain as Liberal-held fortresses such as Isobel Redmond’s Heysen, as well as Kavel and Finniss, both of which will have new Liberal candidates with the looming retirements of Mark Goldsworthy and Michael Pengilly.

Xenophon – who is expected to field around half a dozen lower house candidates – today all-but confirmed he would target those seats, saying: “It would seem obvious that we’d run in the areas where we have our strong support and the fact is Rebekha Sharkie has been outstanding as a local member.”

He denied the split ticket – a decision taken to enhance his independent credentials – was an electoral liability, saying “we all felt very comfortable with [the] decision”.

“It was the right thing to do… I think if you didn’t do a split ticket in some seats there would have been a reaction against us,” he said.

“Obviously people should look at what we did last time… it’s quite likely that’s what will happen next time [but] it’s not fair for me to speak for the group.

“Every election we need to look at distinctly… if the major parties decided to jointly preference against us, that might colour our views, but at this stage it’s hypothetical.”

Also hypothetical – but distinctly possible, given the electoral volatility in four of the last five state elections – is the prospect of the NXT and/or others wielding the balance of power in the lower house, but Xenophon is refusing to anoint a preferred party of government.

“At the moment it’s ridiculously premature to talk about that,” he said.

“We need to a) run candidates, b) win the seats and c) be in a position where it’s a hung parliament… there are so many imponderables.

“I would have thought that, at 17 per cent, my aim is to get my message across – I have to do [that] better. 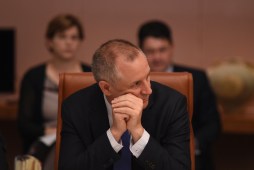 “But whatever the polls say, they won’t be anything like that in 12 months time.”

He warned that “any politician who doesn’t think that anything can happen” is deluded, noting “a new volatility in the electorate that any politician ignores at their peril”.

“That’s why this poll is a snapshot in time – I think things will be very different in 12 months’ time,” he said.