It comes as the broader industry continues to reel from the Opposition’s pledged 10-year-moratorium on fracking in the state’s south-east, with Liberal leader Steven Marshall touring the region today to maximise political mileage from the promise.

But while the Liberals have condemned fracking in the politically-problematic region, where they have only held the seat of Mount Gambier for three of the past 15 years, they have stopped short at backing a proposed Greens bill to extend a ban across prime farmland elsewhere in South Australia.

Oil and gas producer Santos today told InDaily that if the 85 million tonnes of liquefied natural gas (LNG) forecast to be exported nationally by 2020 were all used to displace coal for power generation in Asia, “it would reduce greenhouse gas emissions by 300 million tonnes per annum”.

“That is more than three times the total emission reductions required to meet Australia’s commitments under the Paris Agreement,” a spokesman said in a statement.

“To put this in context, the carbon emission reductions from LNG exports will be equivalent to 20 times those achieved through Australia’s current renewables projects.”

Santos has seized on modelling by the International Energy Agency that suggests “there needs to be a 50 per cent growth in gas consumption to meet the Paris climate commitments”.

“That means we need to foster its development, not ban it,” the company argued.

“Doing so will only push energy prices up and prevent us from meeting our climate commitments.”

The company’s stance suggests the industry is gearing up for an attempt the shift the fracking debate into a broader narrative about carbon emissions.

But Santos’s claim was rubbished by Greens MLC Mark Parnell, who insisted “it doesn’t stack up to any scrutiny at all”.

“What the gas industry hang their hat on is that somehow because burning gas produces less greenhouse gases than burning coal, they’re the solution to climate change – but that’s rubbish,” he said.

“Renewable energy and storage will be the solution to climate change… [the LNG industry] is just trying to add life to an industry that, if the planet’s to stand any chance of tackling climate change, must decline.”

He said the argument against fracking went beyond carbon emissions, emphasising there were “different risks involved”, including the “high volumes of water it uses that comes back up polluted and causes all manner of problems”.

Parnell welcomed the Liberals’ adoption of his party’s platform on both fracking and the proposed nuclear waste dump, saying: “Imitation is the greatest form of flattery.”

“It’s great to have them on board… whilst we’ll find plenty of things to disagree with the Liberal Party on, they’ve sniffed the breeze,” he said.

“The reality is the public have no appetite for some of these risky and dangerous ventures.”

Parnell yesterday gave notice that he would capitalise on the Liberals’ fracking policy position to reintroduce a defeated bill in the new year to ban all underground fracking for gas on farmland, residential land and conservation areas across SA.

But while the move is designed to test the Opposition’s broader commitment, Marshall told InDaily today: “We would not support a state-wide ban”.

“Our moratorium is specific to the south-east,” he said in a statement.

“The south-east is quite different to other areas such as the Cooper Basin. It has a multi-billion dollar primary production industry which we believe can grow significantly.”

He said the Liberals would “continue to support operations” in the Cooper and Eromanga Basins which “have operated safely and responsibly for decades and created thousands of jobs”.

InDaily understands Marshall has met with industry stakeholders within the past month, and gave no indication of the impending moratorium announcement that has blindsided many operators.

The Blue Lake is looking very blue today. Great to be back in Mount Gambier with @TroyBell17 #RegionsMatter pic.twitter.com/aToNOFDb1A

But he insists “in public and private I have always made it clear that the state Liberal position would be based on the work undertaken by the Labor-dominated parliamentary inquiry into fracking in the south-east”.

Interestingly, that inquiry reported that the Liberals’ MP for Mount Gambier, Troy Bell was cool on the effectiveness of a moratorium, which he described as “just a delaying strategy”.

“I would much rather see action, one way or the other, to either gain that social licence, or ban it if it can’t be achieved,” he told the inquiry.

“I am an advocate of unconventional gas. I am not opposed to fracking in parts of South Australia—the Cooper Basin and all the rest of it.”

In a speech to parliament two years ago, Liberal defector Martin Hamilton-Smith argued that the Liberals had embraced uncertainty over fracking in a bid to win Mount Gambier, saying he had argued as Energy spokesman that a moratorium “would have been a disaster and result in condemnation from wide sections of the business community”. 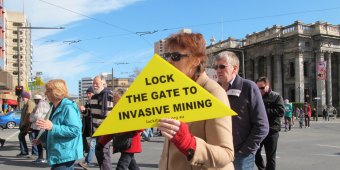 "Green" Liberals under fire from business

“What happened was that, during the election campaign, some polling was done in the seat of Mount Gambier, and the Leader of the Opposition came to me with his chief of staff, quite concerned, and I was asked to develop some options and put them back before the leader, which I did,” he said at the time.

“They were simple: stick with the policy I had enunciated [to endorse fracking], go with the Lock the Gate campaign [and impose a moratorium] and another option, which was some sort of a compromise around a parliamentary inquiry.

“That is the one the leadership group wanted.

“It never went to the party room, from my recollection… I did not want it, but I was asked to come up with a solution that would save the seat of Mount Gambier and I put it before the leadership group. That was the one they wanted, and I was then directed to go and sell that message.”