Day yesterday quit the senate over the collapse of his building empire before the Federal Government revealed his re-election may have been invalid because he stood to benefit financially – albeit indirectly – from the rental paid by the Commonwealth on his Kent Town electorate office.

Speaking to InDaily this morning, Day lambasted the media for “barking up the wrong tree” and Special Minister of State Scott Ryan, whose actions in pursuing questions over his pecuniary interests he says have “put all MPs and senators in the lurch”.

“It was all approved,” Day insists.

“It wasn’t until Scott Ryan came along and started running off getting a legal opinion on something [that this became an issue] … and now because he doesn’t like the answer he’s put all MPs and senators right in the lurch.” 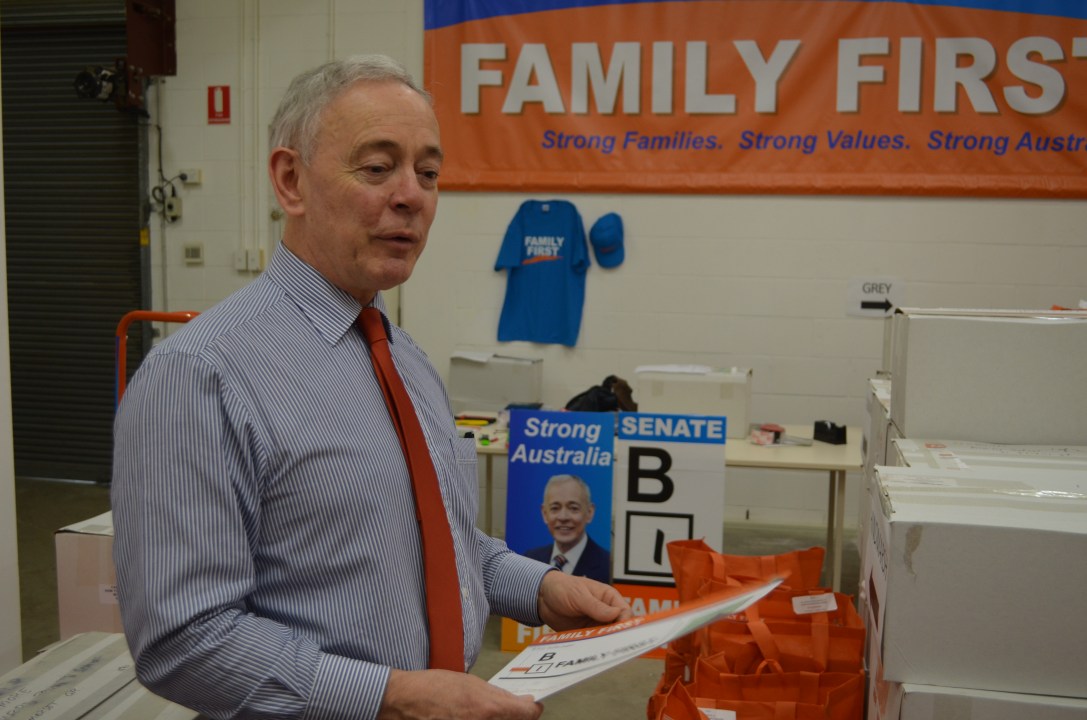 Bob Day inside his Fullarton Rd office in 2013. Photo: InDaily

Nonetheless, Day insists “the onus is on the senator to decide whether they have a pecuniary interest”, arguing all the Government can do “is point you to the relevant act and you make a decision yourself”. 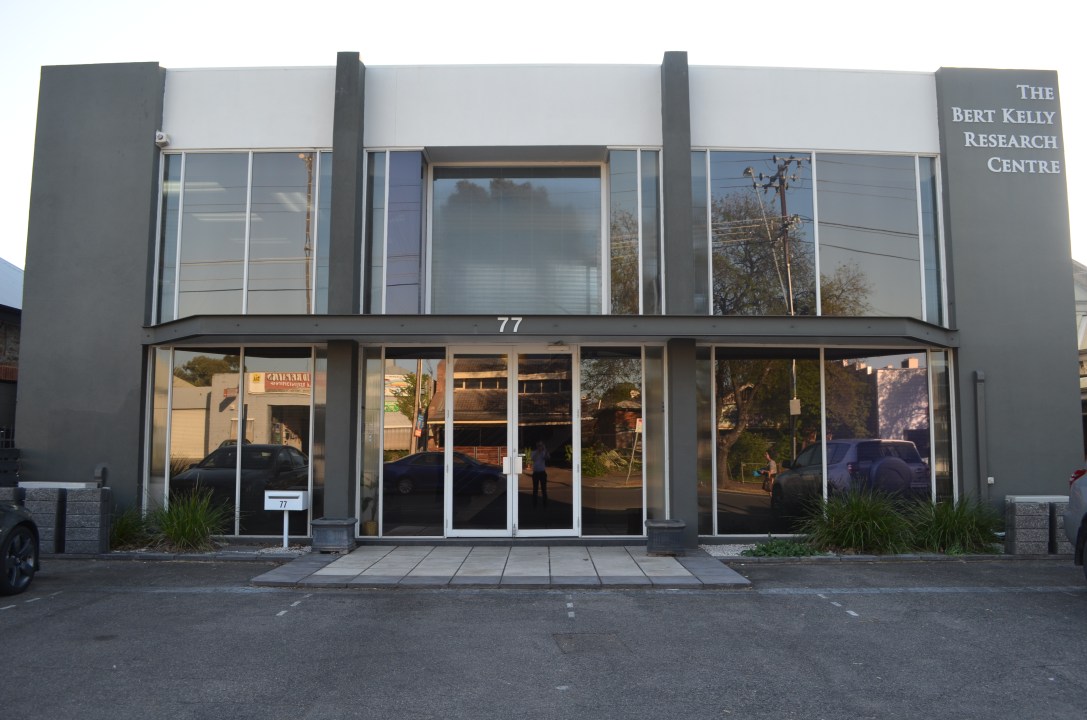 The relevant act, as it happens, is section 44 of the constitution, which states that anyone with a “direct or indirect pecuniary interest in any agreement with the Public Service of the Commonwealth… shall be incapable of being chosen or of sitting as a senator or a member of the House of Representatives”.

The key is whether Day’s arrangement on his electorate office, at 77 Fullarton Rd in Kent Town, constitutes an indirect pecuniary interest.

Day insists it does not.

He cites the 1975 case of Senator James Webster heard by Sir Garfield Barwick, who determined that “individual contracts awarded to a Senator’s family company were held to be outside the scope of section 44” because they would not influence the senator’s “parliamentary affairs” – a point Day emphasised today.

The building since its sale.

“It’s so indirect,” he said of his financial involvement in the property – SA’s unofficial conservative HQ, which he had previously dubbed the Bert Kelly Research Centre.

He sold the building after his election to Fullarton Investments Pty Ltd, a newly-formed company which ASIC documents show was originally owned by Debra Kim Smith, reportedly the wife of Day’s business partner John Smith.

It was subsequently transferred to Colin John Steinert, who the Plains Producer reported in 2011 was a project manager at Day’s Homestead Homes – the foundation company of his Home Australia Group which collapsed last month, prompting the senator’s resignation yesterday.

Day confirms Fullarton Investments was to receive rent for the property from the Commonwealth – although he says it never did – while repaying Day for the loan it used to purchase it. 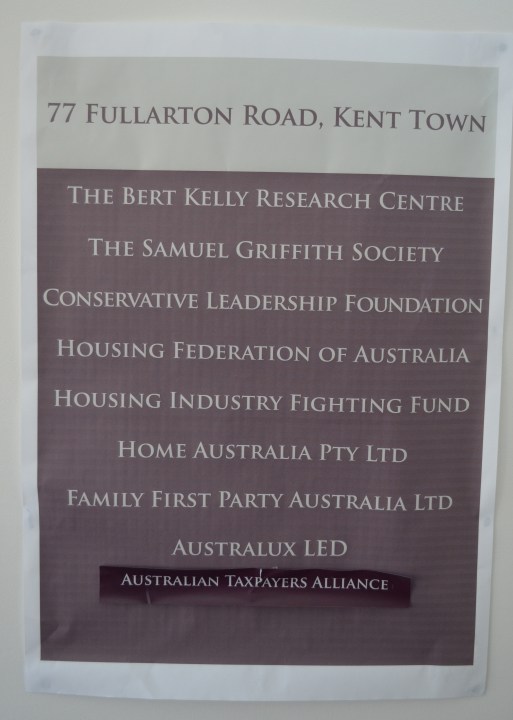 A list of the companies that occupied the building in 2013. Photo: InDaily

“People only want to report the sensational, emotional conflict stuff, but the whole section of the act is about influencing the emotion or action of the MP or senator,” he said.

“That’s the guiding principle of this: is it possible that a senator’s vote could be influenced by this pecuniary interest?”

Day said all the relevant information about the company was “on the public record”, but not on his own register of interests where in a box marked “Any other interests where a conflict of interest with a senator’s public duties could foreseeably arise or be seen to arise” he has written ‘nil’.

He said he didn’t have an obligation to declare the arrangement with Fullarton Investments because “it wasn’t me… it was a company that my wife is a shareholder and director of”. 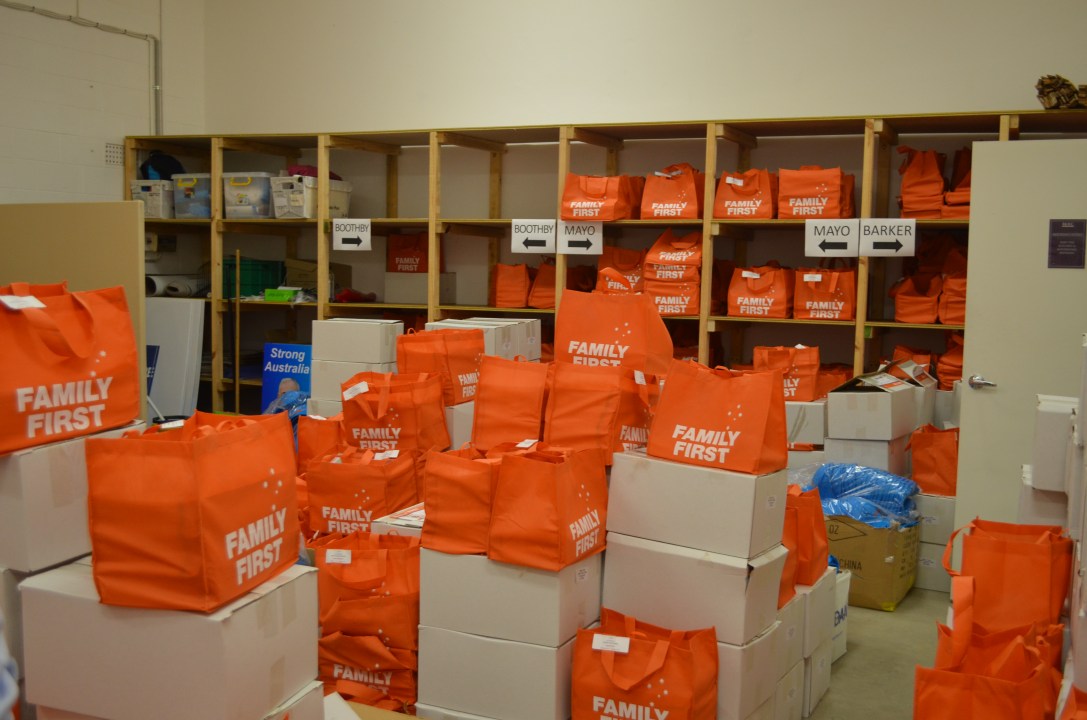 Electioneering material and How To Vote cards stored at the office before 2013. Photo: InDaily

He said he spoke to bureaucrats at the Department of Finance after his election who told him: “We can’t rent it from you, it won’t look good.”

Day now claims the Government “is in possession of a legal opinion which says the day the Department of Finance signed a lease with Fullarton Investments Pty Ltd… was the day I became ineligible to be a senator”.

“That day was 1 December 2015. The lease specified no rent was to be paid until after 1 July 2016. No rent was ever paid to Fullarton Investments Pty Ltd,” he said in a statement today.

Before his election in 2013, Day took InDaily on a tour of the “Bert Kelly Research Centre”, named after a former conservative Liberal MP.

At the time, he described it as “the conservative hub of Adelaide”, a space he shared with Liberal maverick Cory Bernardi, who recorded video updates in a backroom studio.

“Senator Bernardi moved out a couple of years ago,” Day said today. 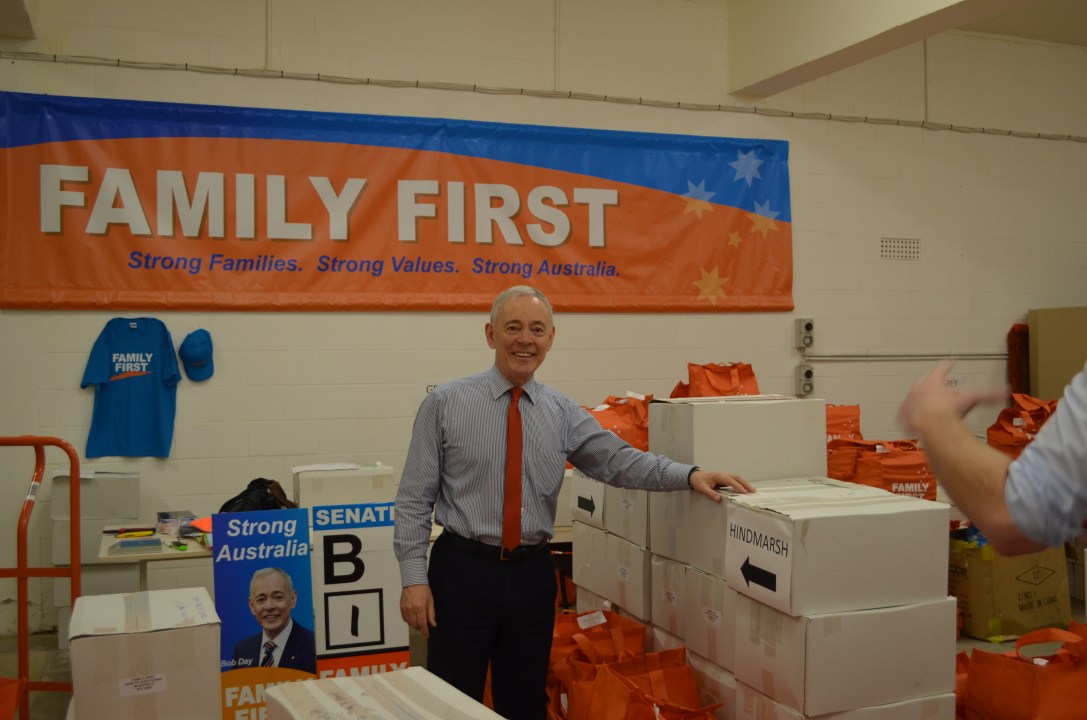 Day in the Bert Kelly Research Centre in 2013. Photo: InDaily

The space was also home to Family First’s state headquarters and a range of other conservative-leaning groups and think-tanks. It featured a library of sympathetic political and economic tomes, with a lectern and seating facilities where he said conservative authors often held book-signings.

It was here that Day busily set about reforming Family First, proudly relating the process in 2013 by which he “put a bit of space between the Steve Fielding era and ourselves”.

He said he had remodelled the party along the same organisational lines as his Homestead Homes empire, and lamented his former Liberal colleagues for not being “conservative enough”. 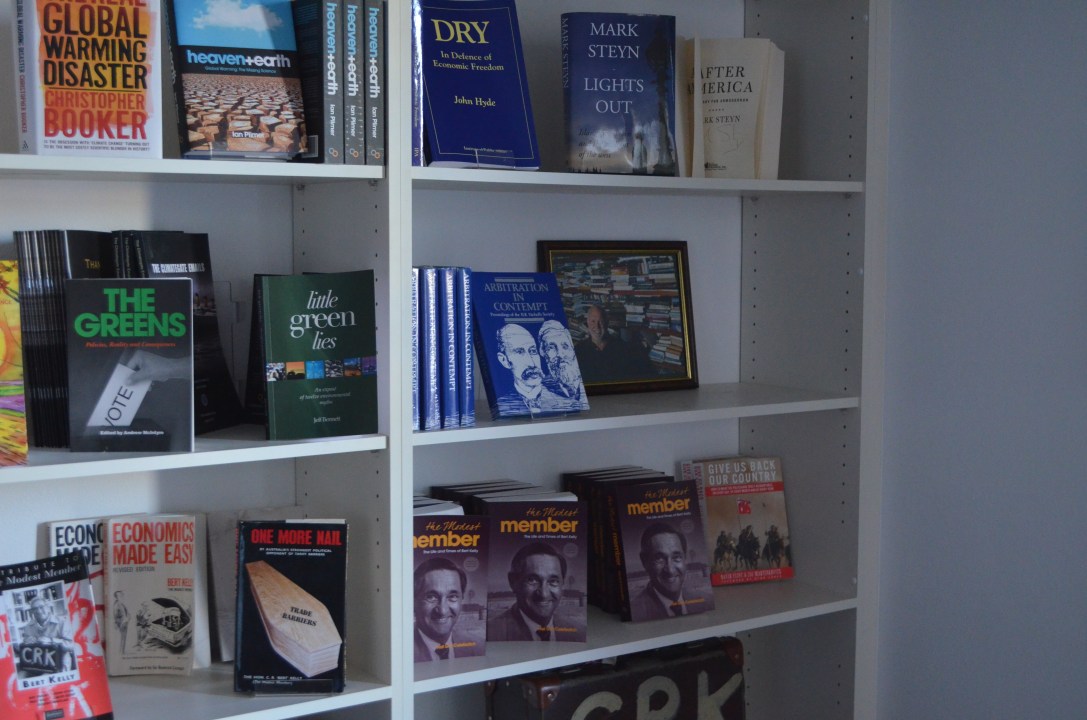 A selection from the library. Photo: InDaily

“If you own your home, you’ve got a job, you’ve got your finances under control, you live in a safe neighbourhood, you don’t need the government. That’s the last thing the government would want, for you not to need them.” 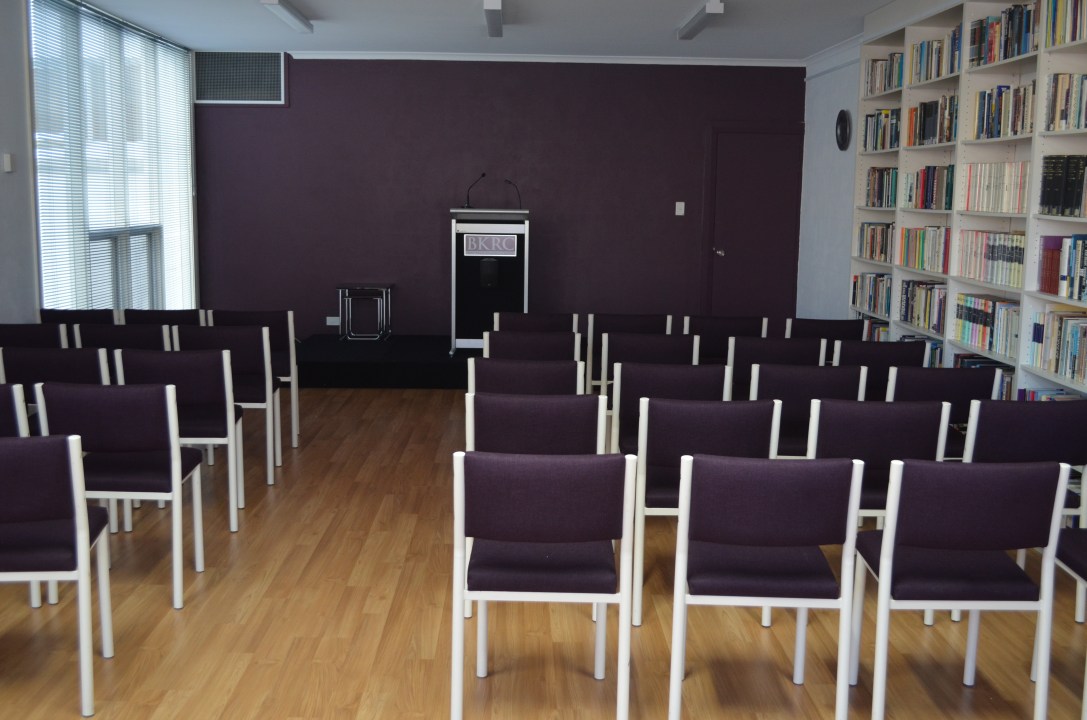 Day said today he was distressed by media reporting of his Home Group empire’s collapse – with disgruntled creditors happy to speak on camera – but “I don’t mind this one”.

“I relish the opportunity to get to the High Court on this,” he said.

“I’ve spoken to Bob about this at some length yesterday and he has actually shown me via email a document which was signed by the Special Minister for State at the time approving the arrangements, so the Government was fully aware of these arrangements back in 2013 or ’14,” he said.

“Not only were they aware of the arrangements, they approved them in writing – so it’s quite astounding to me that some three years later it’s raised as an issue of concern by them.”

If Day’s election is deemed invalid, the position could fall to his running mate Lucy Gichuhi – “who’s actually in Kenya at the moment, to further complicate things” – but it could also end up being taken by One Nation or Labor.

The Opposition was today questioning how long the Government had known about potential issues with Day’s eligibility.

SA Senator Penny Wong told ABC radio “obviously there are questions about the extent to which this has been something people have been concerned about for some time given the facts which have been reported”.

“I note that rent wasn’t paid in relation to this lease in question. I presume that is because there were concerns which preceded the election,” she said. 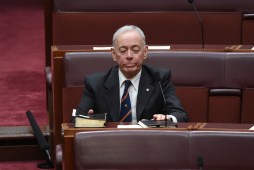 Finally, Bob calls it a Day

Finance Minister Mathias Cormann told Radio National today “it is true that Senator Day has not received rent from the Commonwealth”.

“However, last Thursday, the Government did receive very clear legal advice from an eminent independent expert and, you know, that advice certainly put to the Government that there was a section 44 issue here in relation to a potential indirect pecuniary interest,” he said.

“We provided that advice to the President of the Senate the next morning… ultimately, the only authority in Australia that can determine whether or not there was an indirect pecuniary interest in breach of relevant provisions in the constitution is, indeed, the High Court, sitting as the Court of Disputed Returns.”