However, Labor has avoided a potential doomsday scenario, with the 2018 poll very much up for grabs.

The prospective redistribution is set to make the seat of Fisher – won by Nat Cook in a tightly-fought 2014 by-election – easier for Labor to retain, while the Liberals will need to unseat Martin Hamilton-Smith in Waite before they can form Government in their own right.

The Liberals have been allocated a notional 25 seats, but that includes Waite and Frome, currently held by independents Hamilton-Smith and Geoff Brock, who sit on Jay Weatherill’s frontbench.

Based on the projections, the Liberals cannot afford their vote to go backwards in any of their current seats, and will have to rely on Waite to get them over the line.

The Commission effectively rejected many of the proposals made by the Opposition, which has long argued that the current boundaries are inherently unfair. 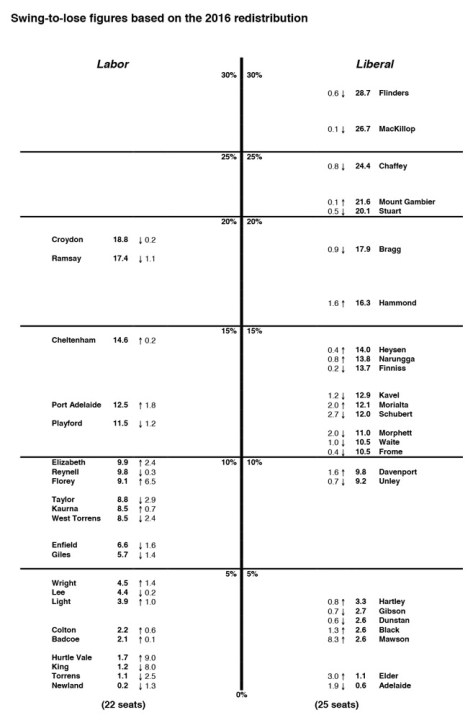 “The Commission has chosen not to simply rely on adjustments to metropolitan boundaries aimed at delivering one or more seats to the Liberal Party in recognition of the greater two party preferred vote it achieved at the last election,” it concluded.

Labor had argued that while the Liberal Party had been “particularly critical” of previous redistributions, in three of the past four elections – each of which Labor has won without a statewide majority – there were “particular issues and events and indeed personalities [that] were instrumental in the results”, and thus “it was not so easy to say that any of the boundaries were unfair”.

The commission agreed that “poor placement of resources during an election campaign can elevate a party’s two-party preferred vote without increasing the number of seats won”.

Further, it found that the Liberals’ much-debated 53 per cent two-party vote could have been inflated by “double counting” in Independent-held seats, and instead argues that “treating the Liberal Party candidates as a group and adding the number of their votes plus preferences gained from excluded candidates results in their obtaining 51.8 per cent of the statewide vote”.

“Having weighed these arguments, we consider that the adjustment to be made should not be commensurate with the full 53 per cent of the notional two-party preferred vote, but should be somewhere approaching two per cent,” the commission found.

The Liberals responded in terse fashion, with state director Sascha Meldrum arguing: “Our legal case said the commission needed to uphold its Constitutional obligations to ensure that a party that attracts more than 50 per cent of the two-party preferred vote be enabled to form Government with at least 24 seats.”

“Based on the swing-to-lose pendulum released today, we could again find ourselves in the position of a party having more than 50 per cent of the two-party preferred vote but still not being able to form Government,” Meldrum said.

“The pendulum shows that Labor could in fact form Government in 2018 with less than 50 per cent of the two-party preferred vote and as many as 28 seats.

“This would give Labor a five-seat majority in the Parliament while still having less than 50 per cent of the two-party preferred vote which is not a fair and just outcome for all South Australians.”

Meldrum said the party would “immediately analyse the proposed boundaries in the report and prepare a written response to the commission”.

Nonetheless, the proposed redistribution goes much further than its 2012 equivalent, with around 390,000 voters changing seats, compared to around 89,000 four years ago.

And it’s not just the Liberals crying foul, with Labor’s state secretary Reggie Martin saying changing two ALP seats to become nominal Liberal ones would mean “Labor will now have to win these seats back and it will make it much more difficult for Labor to win Government in 2018”.

“The ALP respectfully disagrees, and is disappointed, with this approach,” he said.

“If this draft report is confirmed in the final report, it will assist the Liberal Party’s electoral chances and will have the effect of rewarding the Liberal Party for previous poor performance.”

He said Labor had advocated for “only minimal adjustments to the current boundaries and that those changes should be based principally on population changes”.

“The ALP believes that significant boundary changes from one election to the next can adversely affect electors’ sense of electoral and community identity,” he said.

There are also name changes to seven seats, including the battleground electorates of Ashford, Mitchell, Fisher and Bright – which become Badcoe, Black, Hurtle Vale and Gibson respectively.

Changes to the boundaries of Mitchell and Bright, held by Liberals Corey Wingard and David Speirs, could create headaches as to which MP should retain which seat.

Kenyon told InDaily he believed Newland – and the election – was “still winnable”.

“It’s better to be ahead than behind… the Government’s in with a good shot, if it’s disciplined and keeps pumping out the policy and doing things that are relevant to South Australians,” he said.

“Nothing I’ve seen so far has broken my heart or made me think I can’t win it.”

But one Liberal insider told InDaily the party’s nominal 25-seat showing – which includes independent-held Frome and Waite – was “miles short of the amount of seats a 53 per cent vote should have got them”.

But the commission, chaired by Supreme Court Judge Ann Vanstone, said that on the same voting patterns of the last election, “the Liberal Party might be expected to win government with 24 seats in its own right… not counting the seat of Frome”.

“Assuming a uniform swing to the Labor Party of 1.2 per cent, it would win the seats of Elder and Adelaide from the Liberal Party and achieve a majority of 24 seats in its own right.

“Therefore it appears that, based on 2014 voting patterns, the measures taken to address the imbalance, coupled with the changes made in the metropolitan area, apparently have the effect of delivering two extra seats to the Liberal Party, namely Elder and Mawson.”

The review said it had given “a great deal of consideration to what measures should be adopted to address the imbalance in the two-party preferred vote in the last election”, but first tried to determined “what is the extent of that imbalance?”

“The Liberal Party… would have us simply proceed on the basis that it secured 53 per cent of the two-party preferred vote. Yet it would have us place Frome, Fisher, and Waite on the Labor side of the pendulum, ostensibly leading to a more significant adjustment in its favour.”

The report also opted against wholesale changes mooted in the four Spencer Gulf electoral districts, “electing to address the issue of diminishing population and so-called wasted Liberal votes by other means”. 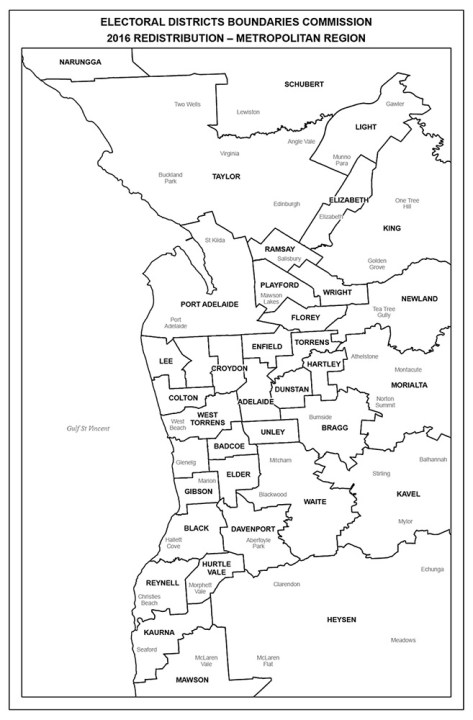