The proposal – derided as a “genuine gerrymander” by Labor insiders – came during recent regional hearings of the Electoral Districts Boundaries Commission, transcripts of which were published on the commission’s website overnight.

It was floated in response to the EDBC announcing it was considering major changes to a swag of regional seats – including Stuart, which van Holst Pellekaan has turned from a marginal battleground to a Liberal stronghold in his two terms as the local member.

InDaily reported in May that the commission had mooted “substantial changes to the districts of Giles and Stuart, including an option for combining the major centres of Port Augusta and Whyalla into one district”.

That would lead to “flow-on changes that would result [in] the town of Port Pirie being the regional centre of an electoral district including the northern outback areas of the state, with the district of Frome being affected”.

A new mid-north seat would then be created to take in Jamestown, Clare and Kapunda.

It’s understood the changes are being considered to address issues of dwindling populations in the existing seats, with all districts mandated to contain roughly the same number of voters – rather than the broader issue of whether the current map is stacked against the Liberals, who have failed to pick up enough seats to form government despite a two-party statewide majority in three of the past four elections.

Van Holst Pellekaan told the hearing he did not agree with the proposal to cut parliamentary representation of the Upper Spencer Gulf region from three seats to two, arguing the move “would be extremely unfortunate and unfair on this important part of our state”.

“This would significantly reduce the representation of the [region] at a time when this area has never faced more challenges or needed stronger representation,” he said.

However, he continued: “If it is necessary in the Commission’s opinion that two of the Upper Spencer Gulf cities must be combined within one electorate … it should be Port Pirie and Whyalla combined together in one electorate.”

Port Augusta – the hub of van Holst Pellekaan’s Stuart fortress – “should be included in a electorate with the outback and the very Upper Mid North area of the state”, he argued.

“Port Pirie and Whyalla are far more similar to each other with regard to achieving the desired ‘communities of interest’ outcome,” he said.

“Both regional cities are primarily industrial economies, each with one primary employer [Arrium and Nyrstar] which dwarfs all others and whose success or failure determines the cities’ and the surrounding regions’ economic and social success or failure.

“However, Port Augusta has always been primarily a service-based economy, both as a commercial and government service centre, and Port Augusta has just lost its most significant heavy industry, the power station, which is now closed, and this differentiates Port Augusta further from Whyalla and Port Pirie.”

While the electoral act states that seat boundaries must form an “unbroken line”, except in the case of islands, the Stuart MP argued there is nothing in the act “which says that the boundary of a electorate must only be on the land”.

“I do not believe there is anything in the Act that would prevent the Commission from forming a electorate boundary using one unbroken line including Whyalla and Port Pirie and the water of the Upper Spencer Gulf between the two cities,” he said. 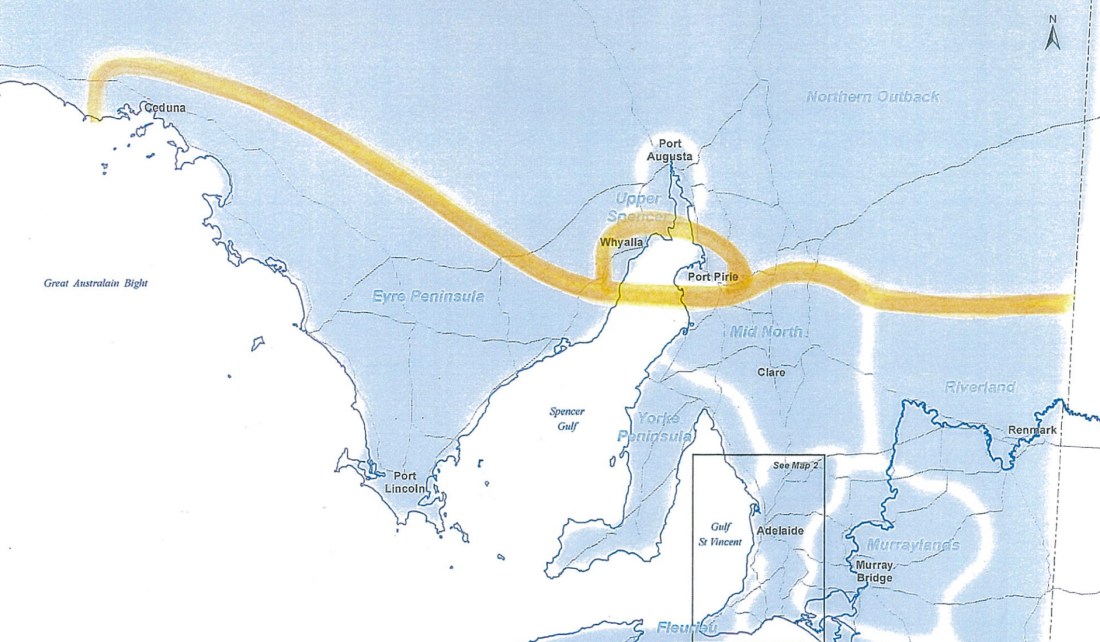 “I know that combining the cities of Port Pirie and Whyalla into one electorate would be certainly be an unconventional step but it would also be a very progressive and effective step.”

The success of the Nick Xenophon Team in the region in Saturday’s federal election could have significant ramifications for the 2018 state election, which will make the outcome of the boundaries commission ever more intriguing.

With counting and redistribution of votes continuing today in the regional seat of Grey – which covers much of the same area under consideration, including Whyalla and Port Augusta – the Liberals are firming to retain the seat, but incumbent Rowan Ramsey is thus far unwilling to claim victory.

Van Holst Pellekaan’s plan has raised eyebrows among Labor ranks, with one insider labelling it a “definitive frontier gerrymander”.

“You’re creating seats that are not contiguous and have an obvious political benefit of having a Port Augusta-based outback seat,” they said, arguing the move demonstrated the Liberals were “obsessed with the boundaries issue”.

Van Holst Pellekaan told InDaily via SMS that “the boundaries the Commission is currently considering are not in the best interests of voters”.

“Reducing the representation of the Upper Spencer Gulf and Outback from three to two MPs fighting for the region is not acceptable and combining all of the Outback and Port Pirie does not make any sense for Port Pirie or for Outback people,” he said.

“Combining Whyalla and Port Pirie would not be ideal, but would be much better for people living in the Upper Spencer Gulf and Outback than what has been suggested.”