The Premier had floated a solution that allowed the Commonwealth to retain the windfall from increasing the GST rate, but would allow personal income tax revenues to flow directly to state coffers to spend on burgeoning health and education needs.

But the Federal Government’s rhetoric on the GST has changed markedly in recent days, highlighted by Prime Minister Malcolm Turnbull’s weekend declaration that Weatherill’s proposal “hasn’t passed the first step” of providing a significant economic benefit.

“You’ve got to first decide, ‘is this policy going to give you the economic outcome you want?’” the Prime Minister told the ABC’s Insiders program.

“With the GST income tax swap proposal, it has not yet passed that first test.”

Asked today by InDaily whether he now considered the GST rise dead in the water, Weatherill said: “I think so.”

He said those in the Federal Government “that were running the argument in favour of the GST were really running it on the basis it should be used to switch from direct to indirect taxation, and that there was a growth dividend in that”.

“[But] now we’ve got the Prime Minister problematising that link… if he’s prepared to publicly speculate and cast doubt on that link, it seems highly unlikely that they’re going to now turn around and make that case [for the GST increase], because he’s on the public record really pouring cold water on the idea.”

What we want is a share of income tax, and that remains

Weatherill blamed Coalition squeamishness, in part, on his own federal colleagues, saying there had been “an above average amount of nervousness about the campaign run by Bill Shorten on the GST”.

But he insists he will continue to press the case for the states to receive a direct share of personal income tax, and for broadening the GST base to include financial services.

“The GST from our perspective is a compromise to allow them [the Federal Government] to pursue their tax mix changes,” he said.

“What we want is a share of income tax, and that remains.

“And that doesn’t put a lot of short-term pressure on the Commonwealth to the extent that it combines with broadening the base of the GST to cover financial services.”

He says broadening the base in that way would pump an extra $3 to $4 billion a year into federal coffers, which “could be the sort of money to deal with the health shortfall”.

“Let the Commonwealth keep the GST, and we get a share of income tax,” he said.

“That remains a viable option, and has the benefit of being mildly progressive as well.”

He said his position has not changed from his long-standing insistence that “any additional revenue should go to health and education”.

“That was the point of my intervention,” he said.

“When we look more closely at the GST it doesn’t solve the problem… it collects too much money in the short-term, but not enough in the long-term, because the GST is not growing at the rate of health [so] in about 10 years’ time we’re back with this problem again, where we’ve basically got a health funding gap.”

The idea of focussing on one tax and saying ‘is it good or bad?’ is not the mature tax debate we should be having

He said he was “interested in long-term sustainability” and “that’s why the solution we proposed – which had some collateral federation reform benefits – made sense to us”.

A Newspoll last week showed 51 per cent of respondents nationwide currently opposed a GST rise, while 39 per cent supported the idea, a result exactly replicated in a local Galaxy poll published in The Advertiser today.

But Weatherill argues “these polls are meaningless when the debate’s undeveloped”.

“I see whole thing as clearly undeveloped, the idea of focussing on one tax and saying ‘is it good or bad?’… it’s not the mature tax debate we should be having,” he said.

He said it would only be such a debate that would “change people’s attitudes”, adding he would convene a panel to drive a public discussion.

“I think the surf is up on the issue,” he said.

“I’m relaxed about dropping the GST – it’s got all sorts of problems with it – but what I’m not relaxed about is walking away from the problem, which is cuts to health and education.” 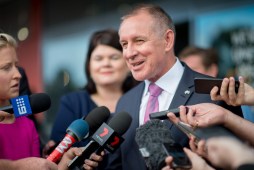 He said the Coalition was “gloating” because “nobody knows about the cuts to health and education”.

“They were feeling quite pleased with themselves that they managed to get that through to the keeper, because it only really starts to bite in the later years,” he said.

“What I didn’t want was to sail through to the [federal] election without the major parties grappling with that question.”

He said come the 2018 state election, SA voters would be pressing him on ‘Why are you raising taxes to pay for health?’ and ‘Why are you shutting hospitals?’, and the Commonwealth budget cuts would be “long-forgotten”.

“I think we’ve raised awareness in the commentariat but we still need to get the idea out there more broadly,” he said.