This was seen as a pointed rebuff to his own state’s Premier, who has advocated a five percentage point rise in the GST, with the extra revenues retained by the Commonwealth in return for the states receiving a fixed share of personal income tax receipts.

“I’m not sending specific messages to anyone [but] I’m saying we need a united front,” Champion told InDaily.

“The Premier himself has made the observation this is a regressive taxation rise… and every party member, no matter what office they hold, needs to put their shoulder behind the wheel and oppose regressive tax changes.”

Champion, who said it was his opposition to John Hewson’s broad-based consumption tax that first inspired him to join the ALP in 1992, said the principle was “about adherence to the party’s federal policy”.

“I’m saying, that’s the party’s policy, and we should be united behind it,” he said.

“The fact is this consumption tax is aimed right at our traditional constituency… our constituency is people who work for a living, driving trucks, working in factories… those people deserve that our first priority is rejecting taxation changes which everybody acknowledges are regressive and can’t be compensated for.”

He said while any GST increases would be permanent, related compensation measures would be “transitory”.

“They all go over time – they can’t be relied upon,” he said.

He acknowledged state governments had been put in a “difficult position” by budget revenue cuts to health and education.

“I’m not saying this isn’t difficult for the State Government, in terms of revenue [but] I’m making a point [about] the values of the Labor Party.

“The federal policy is quite clear – we oppose an increase in the GST, and the next election should be a referendum on that… if [people] want an increase they should vote Liberal.”

He declined to say whether he had received any fallout from within the party over his comments, arguing that was an internal matter.

“Look mate, I’ve never particularly pulled my punches with anybody,” he said.

“I don’t think my political career has been one of not making a point when I believe in something… I make my point as clearly and effectively as I can, and I don’t expect anybody else to do any different.

“We should have the courage of our conviction, and my conviction is this is a regressive tax which hurts people on low incomes, and leaves them shouldering all the burden – and that’s unfair.”

But Weatherill wasn’t taking a backward step either, telling ABC’s Radio National: “I’d be surprised if the Labor Party turned its back on its democratic traditions and started gagging state Premiers from advocating what they believe is in the state’s interests.”

“I think that would be an unusual step [and] I just don’t think it’s going to happen,” he said.

“I’m all for a robust debate but I don’t think you win an argument but simply putting your hands over your ears and not wanting to hear the other side of the debate.” 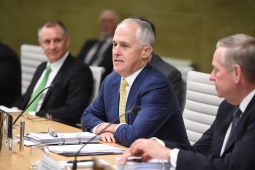 He didn’t publicly criticise Champion’s contribution, saying “I suppose you can’t call for a national debate on this issue and then complain when you get one”.

“I welcome any contribution to this question… it’s a powerful critique, but you can’t come to this debate with just a critique, you also have to come with a solution.”