With a day to go before the writs are issued to kickstart South Australia’s four-week election campaign, Opposition Leader Peter Malinauskas was once again demonstrating his fondness for this sporting life – although he did manage to keep his shirt on today.

The Labor leader hit the bowling green at Colonel Light Gardens for a few pointers, before announcing a policy to extend free public transport for all seniors card holders at all times, at a cost of $1.26 million a year.

The scheme currently provides for free travel in off-peak periods between 9am and 3pm, but bowling club veteran Bob Sleigh – whose name was notably delightfully apt for the transport theme – told media today: “I’d like to say I use it before 9 o’clock but when you get to 84 you’re still getting into action at that time.”

After his semi-nude Aquatic Centre photo-op last week recalled the old Oscar Wilde adage that the only thing worse than being talked about is not being talked about, Malinauskas was asked whether he was deliberately making a feature of his sporting prowess during the campaign.

“I haven’t activated that, but sure why not?” he said.

“I love sport – I love being out and about with people.”

He did, when pushed, make a firm commitment to avoid breaking out his ubiquitous footy guernsey over the forthcoming campaign. 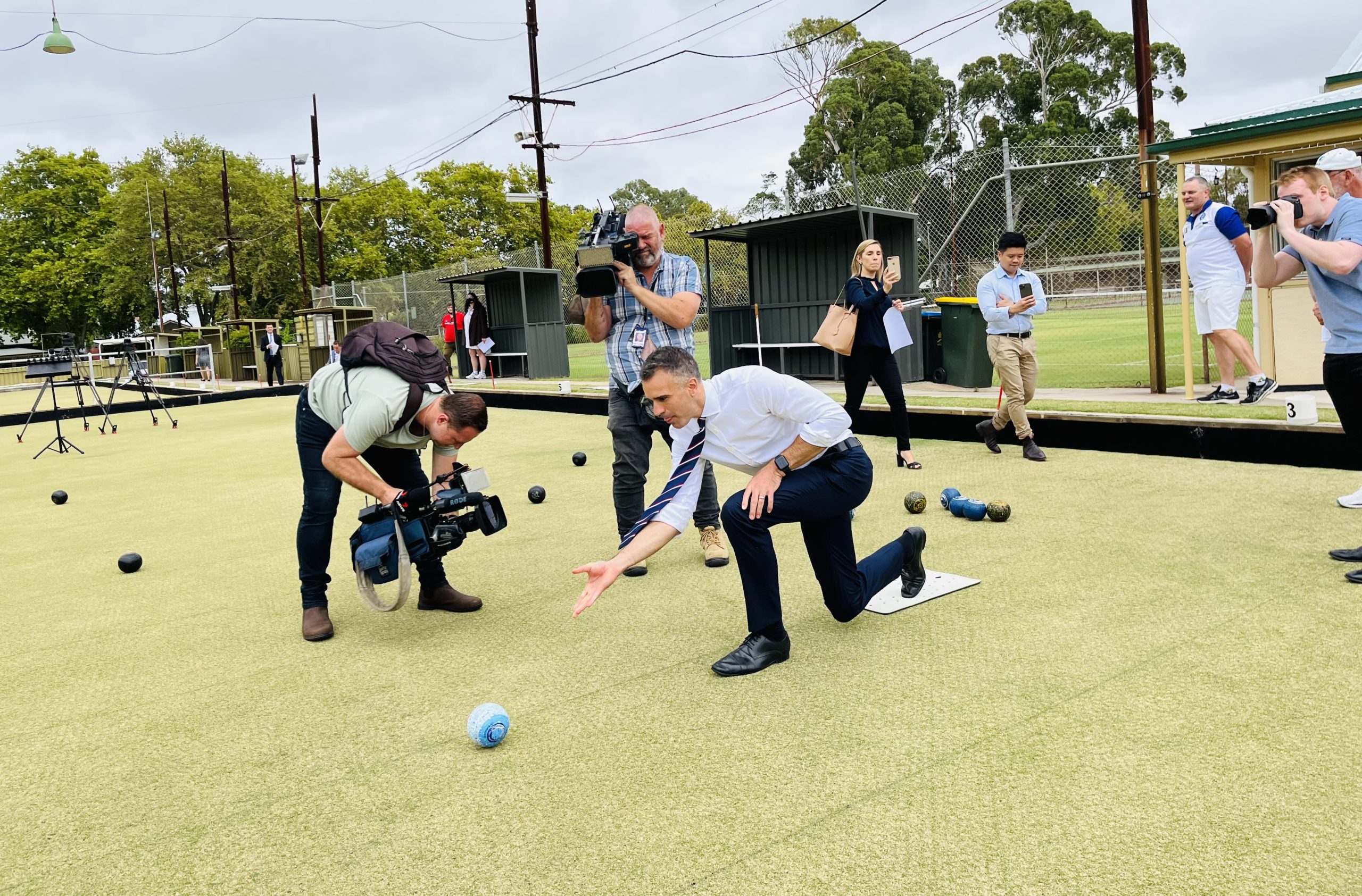 Malinauskas gets his game face on. Photo: Tom Richardson / InDaily

But while the Labor leader managed to keep his shirt on, his Treasury spokesman Stephen Mullighan was having a hard time keeping his hair on yesterday, when he left a media conference addressing the jobless figures to remonstrate with a parking inspector who was giving him a ticket.

It’s still not our favourite blooper from Mullighan, who once famously road-tested a driverless car into a dummy kangaroo – but still, an odd gambit on election campaign eve.

Malinauskas, however, did his best to laugh off the incident today, suggesting it showed a penurious side of Mullighan befitting a Treasurer,

“Rob Lucas has a penchant for focussing on the dollars, and I know Stephen Mullighan shares the same thought when it comes to expenditure of taxpayer funds – he’s made a $71 contribution of his own to the Adelaide City Council,” he said.

“I think we’re all human at the end of the day and no-one likes getting a parking fine – but I know ‘Mullas’ is more than happy to pay it!”

The COVID-hit Adelaide Crows are reshaping themselves on-field and off, with a ballot currently underway to appoint two new directors.

Premiership player Rod Jameson is putting his hand up for another term (and if the history of these ballots is any guide, former players are regarded by the voting fanbase as the standout candidates for club management roles).

But the Crows also have to replace the last member-elected director, Nick Takos, who stepped down after a standoff over the club’s staff and player vaccination mandate, as first revealed by InDaily last November.

Given the ill-will that lingered after that episode, Takos’s own endorsement for his successor might be seen as something of a double-edged sword.

But, for what it’s worth, he was happy to sing the praises of one hopeful, former longtime Channel 7 newsreader Graeme Goodings, lately heard on FIVEaa.

“A quality person, proven acumen and expertise, understands what a football club is all about, good luck Graeme,” Takos recently enthused on his Facebook page, as he shared Goodings’ post announcing he had thrown “my cap in the ring for a seat on the Adelaide Crows board”.

“A true football person with the right skills,” continued Takos, who lectures in sport and recreation at the UniSA’s business school.

As Peter Malinauskas can attest, in an election any publicity’s good publicity, and Goodings certainly wasn’t looking the proverbial gift-horse in the mouth.

“Nick, thank-you so much for your endorsement,” he replied.

“Yours are big shoes to fill as you were an excellent Board member who appreciated the importance to the club of grassroots supporters.”

Regions matter (but only after metro)

In Opposition, it was used to illustrate their tireless argument that the then-Labor government had neglected regional SA.

While the phrase still gets a workout from time to time, it isn’t as prevalent these days, given former Liberal MPs representing the Yorke Peninsula and Adelaide Hills regions are currently sitting on the crossbenches.

But it’s a bitter pill indeed to see the phrase actively used against the Marshall Government, which this week was derided by farming lobby groups in Narungga as failing to represent their interests.

And it seems the regional press are none too impressed with the Government’s city-centricity either.

Yesterday Sara Gilligan, editor of the Strathalbyn-based Southern Argus, tweeted in no uncertain terms: “Sick of dealing with Adelaide media advisors who have ‘no knowledge’ of the appropriate regional newspapers to invite to major announcements and therefore fail to do so.”

“You’re the ones missing out on front page spaces. Print media is still a vital medium!” she continued, signing off with the hashtag #countrypress.

Sick of dealing with Adelaide media advisors who have “no knowledge” of the appropriate regional newspapers to invite to major announcements and therefore fail to do so. You’re the ones missing out on front page spaces. Print media is still a vital medium! #countrypress

Podcaster and former Murray Bridge broadcaster Claire Murphy chimed in: “Add regional radio to the list of the overlooked… so many times I found out about a visit from a pollie to the region through social media first, so frustrating.”

The disquiet appears to be broad.

The latest jibes followed a broadside earlier this month from Bunyip Newspaper journo Brendan Simpkins, who detailed a litany of snubs from visiting pollies eager to demonstrate that regions do, indeed matter.

Simpkins’ spray, which was pointedly retweeted by the Bunyip’s official handle, invited a biting retort from Gilligan, who wrote: “#regionsmatter (but only after metro)”

#regionsmatter (but only after metro)

Worth noting that Premier Steven Marshall is pressing the flesh on Kangaroo Island today (presumably, the local media have been informed).

Cheque yourself before you wreck yourself

He quit the top job at Bank SA more than a year ago, but it seems Nick Reade is still signing cheques on the institution’s behalf – electronically at least.

One sharp-eyed customer who last week withdrew the princely sum of $485 for a donation noticed that the bank cheque was signed “for and on behalf of Bank SA” by none other than the state’s most senior bureaucrat.

Which, given he’s been working on the taxpayers’ dime as head of the state Department of Premier and Cabinet since last February, did seem a tad odd – not to mention raising some questions about the veracity of the cheque itself.

A BankSA spokesperson tells InDaily that “we have recently updated the signature on BankSA cheques, and the former signature is being phased out”.

“We want to assure our customers that there is no impact to them with this change and the cheques remain valid,” they added.

Bank SA hasn’t actually appointed another CEO, with Reade’s old gig now evidently being shared across a six-person ‘leadership team’ (which, according to its website, includes the institution’s mascot and “Inspiration Ignition Ignitor”, Piping Shrike). 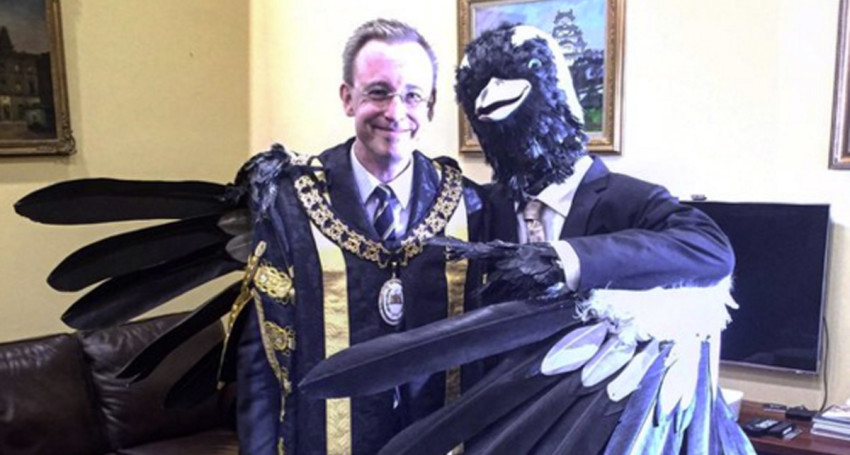 But it’s understood future bank cheques will be graced by the autograph of the bank’s consumer division State General Manager Ben Owen.