The Marshall Government has reported the cost of every marketing campaign it has approved except for one – its “Future Adelaide” deal with the Murdoch media.

That project, a series of paid articles on a special “Future Adelaide” website and various puff pieces in News Corp titles, is about to enter its third year, at an annual cost that informed observers believe runs to seven figures.

The Government won’t tell South Australians how much it is spending on this “partnership” claiming it is commercial-in-confidence – but it does publish a brief annual evaluation of the campaign’s outcomes.

The review of the second year’s activities has just been released – and it shows that readership of the Future Adelaide website has plummeted over the past year, to the point that News Corp has apparently agreed to scrap the site in favour of a “dedicated content hub” on The Advertiser’s homepage to better promote government-approved stories about South Australia’s greatness.

According to the evaluation published by the Department of Premier and Cabinet, in its first 12 months – covering 2019-20 – the Future Adelaide website attracted 215,646 pageviews and 40,312 unique visitors, while the articles published in print reached an improbable 6.6 million Australians (we asked the Government whether this was an estimate of eyeballs on the Future Adelaide articles or just News Corp’s total print audience – they didn’t answer, but we can only presume it was something like the latter).

In its second year, many of those readers have evaporated.

The evaluation published last week by DPC reported that the number of pageviews on the Future Adelaide website had more than halved in its second year – to 83,859 – while unique visitors dropped to 35,548. That’s an average of fewer than 100 unique visitors a day.

The total print reach plunged from that unlikely six million number to 2.5 million.

A taste of what readers can find on the Future Adelaide website.

The evaluation also reported that “across the News Corp network there were 209,391 page views, of which 97,945 were unique views, with 274,500 event video views”. No similar figures were published for the previous year, so we don’t know if this is an improvement or a loss of readership for Future Adelaide articles published within Murdoch titles.

“All extended campaigns need to be evaluated,” he told InDaily. “For example, some road safety and anti-smoking campaigns lose traction after an extended period. This campaign will be subject to the same evaluation process.”

The third year of Future Adelaide was approved by Lucas’s advertising committee in August – four months before it published its evaluation of the year two performance. Which seems to be putting the Murdoch cart before the taxpayer horse.

Regardless, Lucas reckons the Government’s partnership with the global media giant is paying dividends.

Of course, taxpayers have no independent way to judge the return on our investment, given the cost is secret.

“The Government is satisfied that the performance of the Future Adelaide partnership with News Corp has met its objectives,” he said. “This partnership has successfully promoted South Australia to interstate audiences as an attractive place to live, to invest, and to do business.”

Yet, change is coming.

Among the “key learnings” of the past year included in the DPC evaluation are the need to “utilise News assets and mastheads that elevate the Future Adelaide brand and deliver considerable readership/scale” and ” Transition content from the Future Adelaide website to a dedicated content hub that sits on The Advertiser website, to drive more traffic to site”.

Lucas is right that the Marshall Government is more transparent than the previous Labor administration when it comes to advertising, but he is legitimately open to scrutiny when his transparency regime exempts the country’s most powerful media company.

Future Adelaide was apparently far from the mind of Department of Premier and Cabinet boss Nick Reade when he was grilled by parliament’s Budget & Finance Committee on Monday.

The committee chair, Labor’s Kyam Maher, was keen to find out who would approve costs if Reade was to attend “interstate conferences or conventions or meetings”.

Reade replied that the question wasn’t relevant in the current climate.

Maher pushed on: “Do you know, in the chain of hierarchy, who … would approve those things (should you travel)?”

And Reade doubled down: “I would normally take advice from my team, the finance team, for example, around that, but as I said, it’s been all hands to the pump locally here, Chair, so I haven’t been travelling interstate.” 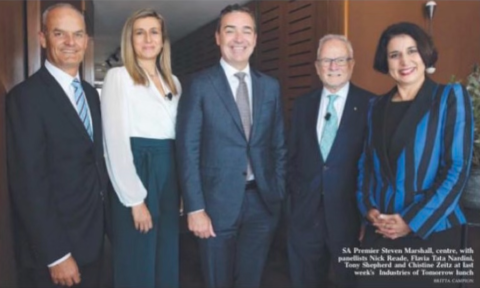 Nick Reade (left) with the Premier Steven Marshall and business leaders at the News Corp event in Sydney last year.

Reade must have forgotten that he has indeed travelled interstate during his time as DPC boss – a trip last year to attend various events in Sydney organised as part of the above-mentioned News Corp deal.

In May 2021 he was pictured in The Australian with the Premier and business leaders in Sydney alongside a hard-hitting story entitled: “Premier pitches new narrative”.

InDaily asked Reade whether he was going to correct the record. A department spokesperson said: “The Budget and Finance Committee transcript is being reviewed in line with usual procedure.”

Reade’s travel records on the DPC website include this entry:

While on advertising matters, this week’s Budget and Finance committee also explored the State Government’s multi-billion-dollar “Building what matters” campaign.

The long-running ad campaign, phase two of which was approved last October at a cost of $1.3 million, will be censored in the lead-up to the March state election.

While the Government insists the campaign is apolitical – its pitch is that “We’re building what matters” in a “record” infrastructure spend – the Department of Premier and Cabinet’s caretaker committee has deemed that some of the billboards aren’t appropriate in the pre-election period.

Senior DPC official Alison Lloydd-Wright told the hearing that the “caretaker reference committee” believed some of the Building What Matters billboards were inappropriate for the caretaker period. [Caretaker conventions are in force from when the election writs are issued until the government has been re-elected or when a new government has been sworn in.]

“So to be clear, not all of the Building What Matters campaign hoardings need to be covered up,” she said. “Those that describe what is being built and have pictures of what is being built can remain. The Caretaker Reference Committee took the view that the inclusion of additional information about the total infrastructure spend of this government was inappropriate.”

She explained further: “The caretaker conventions do set out what is considered to be appropriate use of communications and advertising during the caretaker period – appropriate use of public sector resources, essentially. They provide for a range of things, so agencies should take care during the caretaker period to make sure that what they are producing is not seen as unnecessarily partisan and should review materials like flyers, newsletters, websites.”

A bit of this tram will have to be covered up in the caretaker period. Photo: tenpastten.com.au

InDaily asked Rob Lucas whether he believed the caretaker’s decision suggested the campaign was politicised.

“There are always tighter restrictions on advertising during caretaker,” he said.

“Under the Labor government there were also campaigns which were within guidelines in non-caretaker period but not allowed during caretaker due to tighter restrictions.

“The Liberal Government is simply complying with the same tighter restrictions during caretaker.”

The committee’s chair, Tammy Franks, kept bantering with committee colleagues, momentarily unaware they were still broadcasting to the world at large.

And the discussion revealed, let’s say, a little tension between the committee and senior SA Health bureaucrats Chris McGowan, Nicola Spurrier and Lynne Cowan, who were due to appear next.

The three were “refusing” to appear until 2pm, the conversation went.

“They were refusing to come two days ago,” Franks said.

The penny appeared to drop that the parliamentary audio system was still broadcasting, prompting Franks to say: “It’s no state secret that they don’t want to come to our committee.”

Billy Elrick, on the other hand, would have been well-chuffed with the appraisal of his appearance.

Even Liberal Dennis Hood thought the union rep was a “reasonable” witness.

“He’s very reasonable,” Franks said. “He’s lovely. That’s why I really wanted him. He covers some of the health workers that often get overlooked.”