Variation on a theme

While leadership ballots were once a dime a dozen, yesterday’s vote for a deputy leader to replace Attorney-General-at-large Vickie Chapman was the first time the party-room has met to solve such a stand-off since the end of the Redmond reign, some nine years ago.

And it’s clear that, unlike the divisive contests of yore, the Libs are now doing things very differently.

For instance, in days gone by the party tended to meet amid high factional drama – which was tenuously resolved by the ballot in question.

Whereas, this time round, the ballot was held in relative cordiality – with the factional divisions not emerging until afterwards.

Which was a nice twist.

The two candidates, Dan van Holst Pellekaan and David Speirs, turned up to the vote together and held an impromptu ‘doorstop’, enthusing about their deep personal ties, and repeatedly insisting: “We walk in there as friends and we’ll come out as friends.”

Mind you, the vibe was distinctly less friendly a few minutes later, when the defeated Speirs emerged to tell the waiting media: “I’ve got no comment, that’s fine – thank you, everyone.” 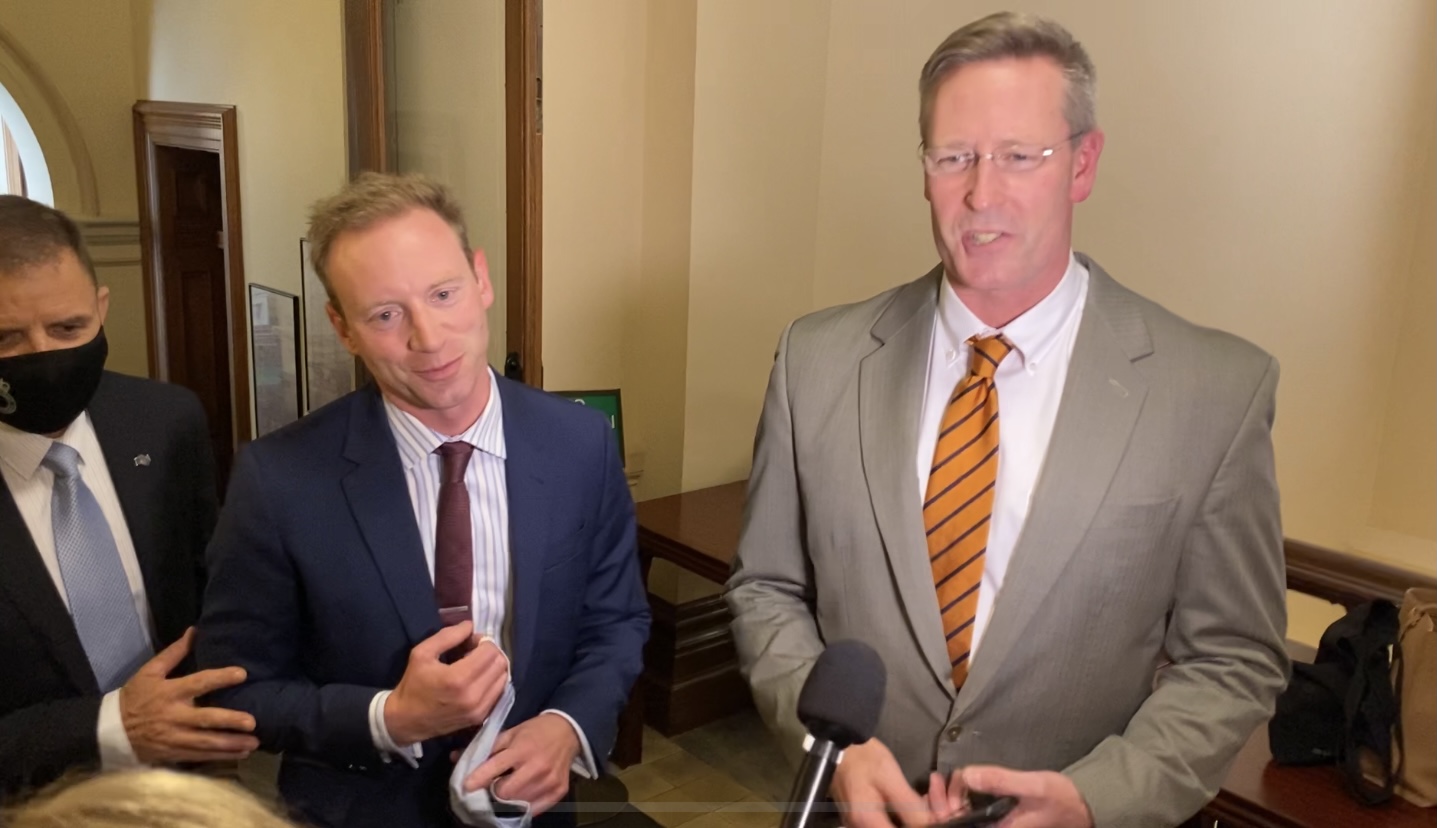 The scuttlebutt within the party suggested the fact that Marshall had quietly appointed ‘DVHP’ – as he’s affectionately (and conveniently) known to colleagues – as Deputy Premier a couple of days earlier had rankled with Speirs and his supporters.

A WhatsApp message from the Premier to his colleagues explaining this was done because DVHP was “the next highest [House of Assembly] Minister on the Order of Precedence” was seen by many as a none-too-subtle hint as to who Marshall wanted as his sidekick.

A text by a “senior Liberal” to ABC radio presenter David Bevan this morning went further, suggesting moderate-aligned MPs were “whipped” into backing DVHP as a bloc – a move the mystery source claimed had “blown” any chance of party unity.

Others in the party tend to agree, with one telling InDaily the treatment of Speirs, who is no card-carrying member of the conservative faction, will have the ultimate effect of “driving him into the Right camp”.

Marshall, however, insists his hands were tied with the interim appointment, saying: “Under the legislation in SA you need to have a deputy premier at all times.”

It’s unclear what “the legislation” refers to exactly, as Notes On Adelaide could find no mention of the Deputy Premier in the state’s Constitution Act (and the office was only created in 1968).

Others canvassed by InDaily say it wasn’t clear whether there was a concerted push by the moderate camp to back in DVHP – who many insiders believed would not have had the numbers to win a ballot had the Left’s John Gardner not opted against running.

One MP who invariably does put his name to his statements is former whip Adrian Pederick, who insists that “either way we were going to have a good result”, and is getting a tad testy that the party appears to be regressing into its internecine squabbles.

“I just find it interesting,” he said of Bevan’s anonymous insider.

“As you know, I put my name to comments [but] I haven’t had that view expressed to me by anyone.

“I guess everyone’s entitled to their viewpoint – but stand up and put your name to it.”

“We’ve got to retain government at the next election and move forward – some of us have spent some serious time in Opposition, and I like the prize of being in Government and getting things done – especially in the regions,” he said.

“We’ve just got to focus on the main game… I’ve lived 12 years in Opposition, some of my friends lived 16 years in Opposition – if that’s where people want to head, that’s up to them [but] my policy is always about the bigger picture, and what we can do for our electorate and the state.”

The shortest-serving (and tallest) deputy in state history?

Van Holst Pellekaan, now a towering figure in the party figuratively as well as literally, was diplomatic about his leg-up in the interim Deputy Premier’s role, telling reporters before the ballot: “Somebody needed to have the role for two days – it fell to me.”

“It doesn’t change anything that’s about to happen,” he insisted.

“I might be the shortest-serving deputy premier in the history of the universe.”

Or, indeed, the state.

And, in fact, despite winning the ballot – he may yet still be.

The current shortest-serving Deputy Premier is Dean Brown, who held the office from October 22, 2001 to March 5, 2002 – but at least he can boast a few years in the top job as well!

With an election in March – at which neither the Government’s nor the Member for Stuart’s own re-election can be guaranteed – DVHP is still in the running.

Talking of the Premier’s WhatsApp thread, it’s telling that Government MPs are as much in the dark about the current health crisis as the rest of us.

A few weeks back, Marshall flicked an upbeat message to his troops – seen by InDaily – in which he helpfully informed them:

“Dear colleagues, today at 1.15pm I will be giving a press conference to announce the date we will get to 80% double vaccinated and open our borders.

He emphasised this happy landing with not one but two airplane emoji. 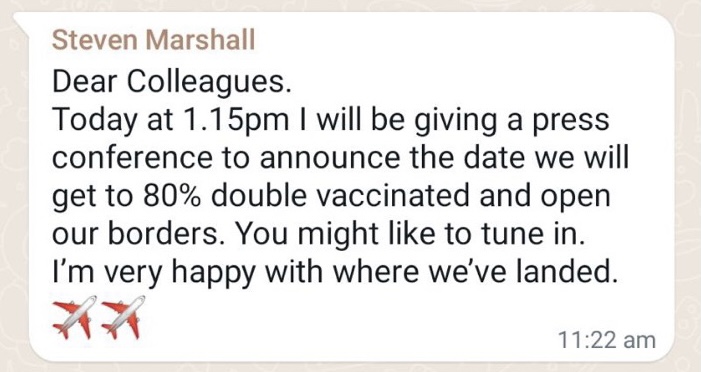 You had one job

You’ve got to feel for Government whip Richard Harvey.

Despite slaving away behind the scenes, his big public moment came when, according to tradition, he emerged from the party-room meeting to declare the winner of the deputy leadership ballot.

Doubtless he’d been up for hours practising his lines, but when the moment arrived, he inadvertently truncated the new Deputy Premier’s name and had to start all over again.

Then, quite oddly, he refused to tell media the result of the vote – a longstanding tradition in such events.

According to insiders, MPs weren’t told either – with the Premier similarly refusing to elaborate.

Of course, it didn’t take long to emerge, and Speirs himself happily confirmed on ABC radio this morning that he had lost 14-8.

“I don’t really know why it was secret,” he shrugged.

Mind you, he added, “I would have liked to have won”.

He was less happy about the suggestion of an orchestrated push against his candidacy, saying darkly: “I’d be very disappointed if that were the case.”

“I’ve put my heart and soul into helping the Liberal Party and particularly Steven Marshall and his team form government… I would like to hope people went into that party-room and the two candidates who put their hand up were part of a level playing field.

“I’d be very disappointed if that wasn’t the case.”

Anyway, at the end of another baffling week we have a new Attorney-General.

Which means her replacement Josh Teague is not technically the Acting A-G.

He’s more just sort of doing the job for a bit.

A strange anomaly reflected in his new signature block on outgoing correspondence – as one recipient pointed out to Notes today.

Teague’s formal title is: Minister for Planning and Local Government (exercising the powers and functions of the Attorney-General).

And to think it seems only yesterday that the Marshall administration was elected with a mission to simplify government and streamline ministerial responsibility.