The state’s “biggest-selling” (and only) daily newspaper, The Advertiser, has taken a notably strong line on SA Health’s “shambolic and overwhelmed” border exemption process of late.

On the weekend, the journal unmasked “the man in charge” of the process – the agency’s chief financial officer Jamin Woolcock – noting that “questions have been raised as to whether SA Health’s chief accountant is the best person to be leading the state’s embattled COVID-19 travel exemptions panel as more pressure is heaped on the shambolic system… which is grappling with a backlog of more than 7500 applications and wait times as long as three months.”

Sure enough, the exemptions process has been a divisive one in Liberal ranks, and a primary cause of outspoken backbencher Nick McBride’s recent aborted flirtation with independence.

The Tiser has also contrasted widely-publicised exemptions for project workers with the “thousands still waiting to be allowed home”.

Of course, the paper – and its parent company News Corp Australia – should know all about the frustration of applying for exemptions, as it’s currently trying to procure one for a fairly significant VIP: the Tiser’s new editor, Gemma Jones.

Jones, currently the deputy editor of the Daily Telegraph in locked-down Sydney, was last month announced as the successor to outgoing editor Matt Deighton – and was set to take the helm in “late September”.

However, InDaily understands the company has been finding the exemption process as frustrating as its local paper suggests, with its newest editor remaining stuck in Sydney.

Which means that even if the long-awaited approval is in the post, the only way she’ll take up the role by the stated deadline is by editing the paper from quarantine.

The Advertiser’s managing director Ish Davies tells InDaily: “As with many businesses and individuals, we’re working through this process with SA Health.”

“We respect the fact the process will take some time, but we’re very optimistic we’ll soon get an outcome for Gemma – and she’ll soon join us here in SA.”

A question as to whether Jones’s application had been knocked back was not directly addressed.

In the meantime, it’s understood Deighton, despite a recent round of farewells, will remain in the hot-seat for the time being.

Talking of the Tiser, regular readers may recall Notes On Adelaide last year pondering the propensity of the paper’s star political columnist, ex-federal minister Christopher Pyne, to expound on issues in which he has a vested interest.

These included development on the park lands (Pyne’s firm GC Advisory represented the Adelaide Football Club, which at the time was keen to build a new base on the old Aquatic Centre) and land tax aggregation (while representing a group of businesses united against the Government’s then-proposed changes).

However, there’s little the former Defence Minister loves more than wading into his former portfolio area – although at least when he did so this week it was accompanied by a disclaimer declaring that “the author sits on the boards of and represents defence companies with relevant interests in the defence industry”.

Thus, it seemed a tad surprising last week when InDaily contacted Pyne to comment on the Morrison Government’s shock new commitment to nuclear-powered subs – in the process tearing up the deal he had himself championed with French company Naval – that he politely demurred.

“I think it’s best if I leave the government spokespeople to talk to their announcement,” he quite reasonably explained.

More surprising still, then, that within hours he turned up on the Tiser’s website having penned an entire column to helpfully explain: “Why Australia dumped the Naval Group submarine deal and went with nuclear subs.” 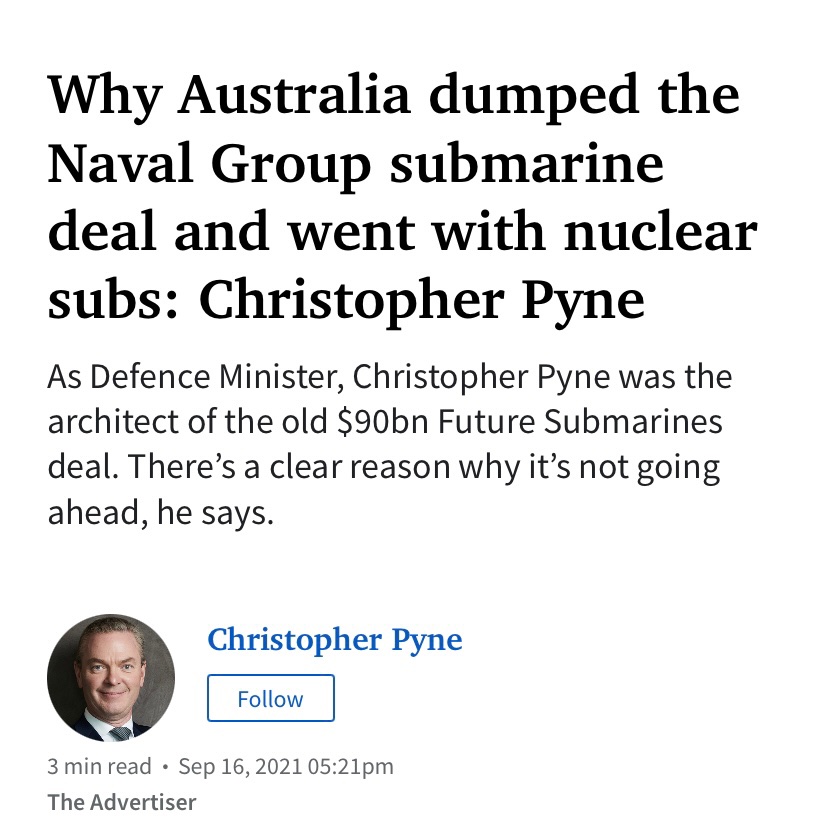 He was quick (as in, one sentence in) to point out that “as defence industry minister, I commissioned the new Osborne shipyard in which they will be built”.

And if you’re wondering, according to Pyne jettisoning the deal he’s long spruiked was actually a great idea.

And nothing whatsoever to do with Naval Group, of whom he insisted: “It isn’t their fault.”

If anything, they’ve been too brilliant, presumably.

No, Pyne beamed, “what has changed is the access the US government has been prepared to give Australia to a technology previously not available to us”.

“AUKUS is the game-changer,” he declared.

And the game has certainly changed: for it was as recently as March this year that Pyne used his Tiser column to sneeringly deride suggestions the Government may pull the pin on the Naval deal, in a column entitled: “Only risk to future submarines project is Naval Group not holding up their end of the deal”.

Wherein Pyne tut-tutted about “a pile-on to suggest that the Australian Government was about to abandon the ongoing contract with Naval Group and either walk away from submarines altogether or award the contract for twelve submarines to another company to deliver”.

This, he huffed, is down to “a certain weirdness” about the level of debate in Australia, conducted as it is by people without the long expertise in the field of the former Defence Minister (2018-2019), such as former submariner Rex Patrick.

The claims, he said, were “mystifying to most people in the know around the world”, adding witheringly: “Perhaps the project is too big and too complicated for our polity to digest?”

“It is easy to pick at a program of such magnitude but is it wise or intelligent? To me, it smacks of a lack of maturity among those in Australia who profess an expertise or interest in defence.”

Fortunately for Pyne, he has long declared himself “unembarrassable”.

“The silliest commentary has been that submarines are obsolete and the Australian Defence Force is investing in old kit not fit for purpose for warfare in the future,” he wrote back in March.

“Then there is the nonsensical argument that the Attack Class submarines are no good because they aren’t nuclear.”

Almost all of these arguments, Pyne lectured, “are driven by people who either know nothing at all about submarines and defence or have outdated information that is no longer relevant”.

Moreover, he opined, “Australia does not have a nuclear industry” and “one cannot be created overnight”.

“Even if there was the political will to create one, which there isn’t, what political party is going to waste its political capital on creating a legislative framework for a nuclear industry that can sustain nuclear submarines, that has zero chance of passing any Upper House in any jurisdiction in Australia?

“Think about it. There’s more chance of me winning the 100 metres sprint at the Tokyo Olympics.”

Unfortunately, it’s too late to test that theory but he still has three years to limber up for Paris 2024.

In the meantime, perhaps he should have a word with his former colleague Andrew Gee, the Minister for Veterans’ Affairs and Defence Personnel, who rushed out a statement after last week’s AUKUS announcement insisting Australians “shouldn’t mourn the loss” of the Naval deal.

“By the time those submarines came into service, they would have been technologically obsolete,” Gee said.

“Future generations would not have thanked us for passing them down to them.”