A pathological war of words

Premier Steven Marshall, quite rightly, has gone out of his way to praise the efforts of the state-owned SA Pathology throughout the recent seven-day lockdown.

Even while he was forced to apologise for the surging wait-times, he was quick to emphasise how hard Tom Dodd and his team were working to get through record numbers of COVID-19 tests.

On Sunday, with the end in sight, Marshall was particularly effusive: “Thank you to the people at SA Pathology,” he said during his daily COVID update.

“They’ve been enduring some horrendous conditions and I really do want to thank all the SA Pathology staff, security officers and people doing the traffic management.”

The next day he again singled them out, saying: “Thank-you very much to all the people on the frontline – especially those people at SA Pathology.”

Again, he emphasised the “very trying weather conditions” they were working through.

Even on Tuesday morning, when he delivered an end-of-lockdown monologue that thanked so many people it was reminiscent of Cuba Gooding Jr’s infamous public display of gratitude when he won Best Supporting Actor at the 1997 Academy Awards, SA Pathology was the first cab off the rank for a tip of the Premier’s proverbial hat.

This SA Pathology thank-fest wasn’t going unnoticed by those performing much the same work for the state’s private pathology providers, who were similarly doing their bit to work through record numbers of tests.

An employee of Clinpath, Crystal Lee, even took to Facebook to call Marshall out, in a post that attracted thousands of likes after being shared by GlamAdelaide. “Dear Steven Marshall, today you profusely thanked SA Pathology for the amount of tests yesterday and acknowledged the horrendous weather conditions they worked in… I agree, they should be applauded,” Lee began.

“However, I work for Clinpath and myself and my friends, along with friends I have that work for Australian Clinical Labs, worked under the exact same conditions and I know we contributed a big part of those 23k tests.

“We were cold, got rained on, hailed on, abused, we had sore feet and our backs hurt.

“Please don’t give accolades to just one company, it’s a huge slap in the face to the rest of us.

“We are equal, we have ALL stepped up. We are fighting the same constant, relentless, stressful fight so it would be wonderful if the Government could also notice the help we are giving and for us private companies to not be forgotten by you and your team.”

She signed off from “one of many tired Pathology employees”. 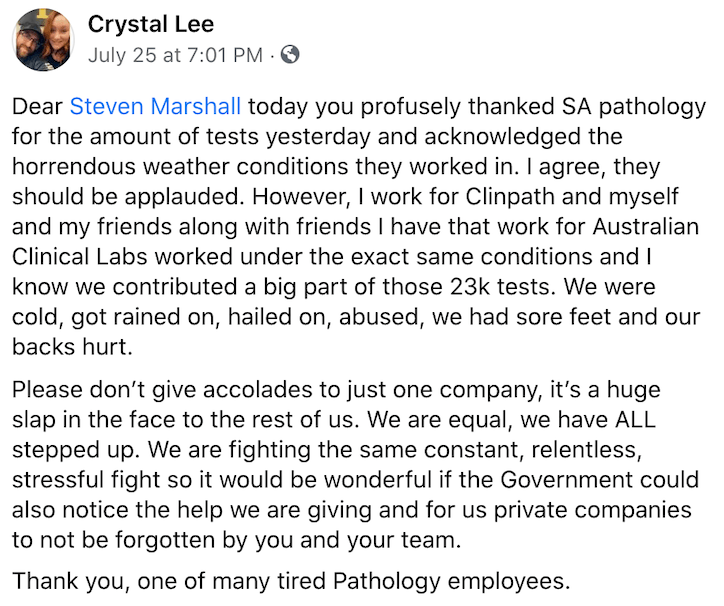 It’s fair to say there’s been some tension since the pandemic began last year between the Marshall Government and the state’s private pathology services, particularly Clinpath.

Last year, in an increasingly-terse series of email published by InDaily, CEO Dr Fergus Whitehead offered Marshall and his Health Minister Stephen Wade Clinpath’s services to help ease the burden on SA Pathology, while requesting some government funds to increase its capabilities to do so.

After several fruitless entreaties, he finally wrote: “Your lack of a response is bewildering and shows a complete lack of respect as to the intent of my previous correspondence.”

“It was only six months ago when in the press you were asserting that SA Pathology was inefficient, needed to reduce its budget and raised the possibility of privatisation, and now you are espousing its virtue and bloating its staffing levels and cost base even further… and yet our offers to assist this state, even with other routine tests, have been ignored,” he wrote in May.

“Your lack of response suggests to me that the state Liberal Government has no interest in South Australian private pathology and don’t view it as an essential service.”

Days later, Whitehead fired up again, after Wade announced the formation of a state-run “rapid response team” – delivering the exact same service that Clinpath was already federally-contracted to provide, which the CEO dubbed “a waste of Government funds”.

They’ve since patched things up, with the company helping underpin the state’s testing regime.

However, after repeated snubs in the public gratitude stakes, Whitehead this week fired off another email.

On Monday morning, he wrote to Marshall and Wade in a message seen by InDaily.

“I have no doubt that SA Pathology are doing a great job… I trained with Tom Dodd and I have great respect for him,” he began.

“However, as Liberal ministers, the supposed champions of private enterprise, you seem to have forgotten the COVID testing activities of the private sector in your regular press conferences.

“Clinpath has many staff working long hours who would appreciate a mention or even a small ‘thank-you’ in front of the camera.

“I personally don’t want your thanks… I am asking for all our staff at Clinpath that I can tell you have gone above and beyond during this pandemic to help with the testing effort with absolutely no support from the SA government.”

Whitehead points out that in other states such as Victoria “the state government have been happy to facilitate private COVID testing as they recognise that we are all South Australians and that we are all in this together”.

“Believe it or not, we want to help SA during this public health emergency,” he concluded.

The none-too-subtle nudge appeared to do the trick though, because on Wednesday morning, Marshall kicked off his first post-lockdown press conference with a mea culpa.

“Yesterday I was talking about the great work SA Pathology has done [but] I also have to highlight that we’ve got some fantastic private pathology services in SA, who also did some great work – in particular Clinpath and also ACL.

“The private pathology labs in SA have been doing extraordinary work getting those tests back and we thank them very much.”

A happy ending, to be sure, but it’s worth pondering the public vs private imperative here.

The Commonwealth subsidises state COVID testing, with a reported Medicare subsidy of $85 per test for private providers and half that – $42.50 – for public laboratories.

So the promotion of the public service and its testing sites would naturally see a proportional increase in funding for the state-run service.

Notes asked the Premier’s office this morning whether it was in the Government’s interest to promote its own pathology service, but didn’t receive a response.

From divisive to decisive

One of the more divisive internal ballots in recent SA Labor history wound up this week, with outspoken challenger for preselection in the safe federal seat of Spence, Alice Dawkins, garnering just 11.5 per cent of the vote to Transport Workers Union official Matt Burnell’s decisive 88.5 per cent.

The preselection has been a fraught one: Dawkins first upset the apple-cart merely by nominating against the Right-faction’s chosen pick, and things escalated from there.

She shocked the party with a threatened Supreme Court challenge, posted a series of critiques of the party and its preselection process and then appealed to a national executive tribunal for the ballot – and indeed by extension every other preselection in every other state – to be overturned and re-done, with a view to properly addressing Labor’s commitment to Affirmative Action.

Labor’s state secretary Reggie Martin, a Right-faction organiser, has been an oblique target of Dawkins’ anti-factional critiques – most notably, and peculiarly, in song:

But Martin – himself an Upper House candidate for Labor at the forthcoming state election – has thus far declined to comment, given the preselection process was in train.

Yesterday, he broke his silence with a short statement, congratulating Burnell and noting he “convincingly won all three components of the ballot to achieve a Two Candidate Preferred vote of 88.45% to Alice Dawkins 11.55%”.

The statement doesn’t mention Dawkins again, but contains one passage about the campaign that could well be construed as passive aggressive.

“Matt ran a positive campaign, engaging with the members and this has been reflected in the results, gaining the biggest margin in a preselection contest in decades,” it reads.

Still, it’s all over and done with now, although the bad blood continues to simmer. When the party finally announced Burnell’s victory (almost 24 hours after InDaily first reported the results), Dawkins was still none too happy that she hadn’t been kept in the loop:

The team for all South Australians?

Steven Marshall raised eyebrows yesterday when he arrived at a media conference sporting a face-mask with a distinctive logo emblazoned on the front (pictured above): the logo of the mighty Adelaide Crows.

The Premier, of course, is a noted Port Adelaide Power enthusiast, despite also being the Number One Ticket Holder for his local SANFL team Norwood – which is, as many tend to point out, a bit odd in itself.

Asked whether he’d suddenly changed AFL teams, the Premier was quick to change the subject.

“Yes, well… er… any other questions?” he responded when asked about the perturbing apparel, before pivoting to spruik the then-upcoming Olympic 100m men’s freestyle final featuring his fellow Immanuel College alumnus Kyle Chalmers.

Perhaps, then, the Crows face-mask was meant as an oblique tribute to Chalmers, whose dad Brett of course is very famous for having played 50 games for the Adelaide Football Club. Amongst other things.

Or maybe – go with us here – Marshall left his own mask at work and had to borrow one from the stash of some staffer who is an unfortunate Crows fanatic, and was unaware that he had become an unwitting ambassador for his club’s hated crosstown rival.

Whatever the case, he was quick to rectify the oversight with the magic of photoshop.