Across their 16 years in Government, Labor luminaries loved perpetuating the notion that their party was a well-oiled and formidable political machine.

But perhaps it was the power of incumbency that kept the machine’s cogs spinning.

Because without it, a casual observer might ponder how they ever managed to win an election, let alone four on the trot.

For starters, they recently rebuffed a well-known local candidate in Newland for a (literal) unknown who ended up pulling the pin in any case, leaving the party currently without boots on the ground in the state’s most marginal seat, nine months out from an election.

In fact, there are currently only five ALP candidates for seats the party doesn’t hold – as detailed on Labor’s official website, which this week resembled (to put it delicately) a bit of a hot mess.

A screengrab of SA Labor’s website earlier this week.

For starters, you could meet their candidate for Wright.

The problem is, the already have a candidate for Wright.

In fact, they already hold the seat.

And Blair Boyer, recently promoted to Peter Malinauskas’s frontbench, might be slightly perturbed to find out he’s been usurped.

By a guy named Andrew Wright.

Yes, either a helluva wacky coincidence that he’s running in his namesake seat, or someone in party HQ just unwittingly entered the same word twice, given Wright (the candidate, not the seat) is actually running in regional Stuart.

Still, not the sort of error that would happen again.

The same page also declared Cressida O’Hanlon as the party’s candidate for Sturt.

Which must be a relief for Premier Steven Marshall, who thought she was running against him in his eastern suburbs seat of Dunstan. 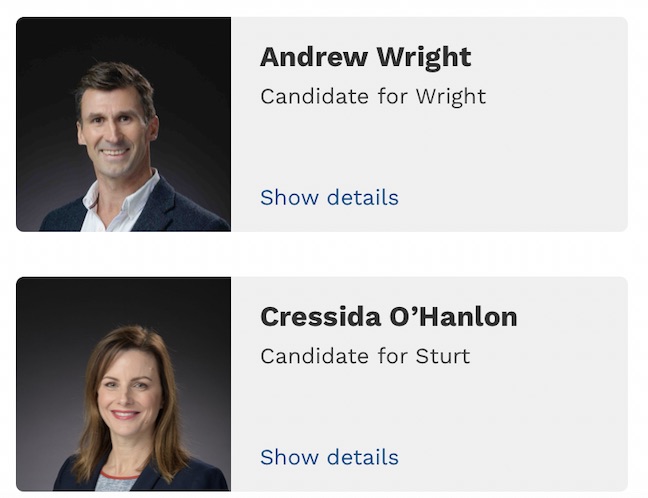 O’Hanlon, of course, has previously run for Sturt – a federal seat in the same neck of the woods – so presumably someone figured it was easier to simply cut and paste her previous bio than to bother updating it for the current campaign.

Fortunately, most of the faux pas have been gradually fixed up over the last few days.

Although, as of this morning, O’Hanlon’s bio blurb still crescendoed on the perplexing pledge: “Cressida is ready to use her diverse experiences and skills to represent the Sturt community.”

Democracy is coming to the AFC, sort of

A couple of months back, the Adelaide Crows ran the latest round of their member-elected director ballots, in which ordinary folk (or extraordinary, preferably) get a chance to be voted onto the club’s board.

At least, providing no ex-players also happen to be running that year.

In a four-way ballot, Takos got 31.3 per cent of the vote, ahead of commercial lawyer Shanti Berggren on 26.8 per cent.

Ryder polled 21.8 per cent, while business identity Donny Walford (who ironically boasted the most boardroom experience, having sat around the top table of several companies and foundations, including the ABC) came fourth with 20.1 per cent.

So it was notable that the club subsequently announced it had appointed Berggren to its board of directors anyway.

Not least because her day job is as Deputy General Counsel of Business Legal at Optus – the telco that happens to be the club’s major sponsor, at least until the end of next year.

One might also ponder whether Ryder might be left wondering why, if the club was happy to appoint one of the unsuccessful member-elected candidates to the board, they didn’t simply go with the one who was on the board in the first place.

Although he declined to comment, so we’ll never know.

Crows chair John Olsen told Notes On Adelaide Berggren “ticked a number of boxes”, including the need for a better “gender balance on the board” – but insists the appointment “had absolutely nothing to do with Optus”.

“Not at all,” he emphasised.

“She nominated for the member election and came in second, by a very small margin.” (It was a 4.5 per cent margin actually which, in political terms, is hardly even marginal).

Olsen says Berggren wowed many members with her Zoom-call prowess during the campaign, and “people had reported to me how impressed they were with her”.

“A number of regional people had indicated to me their strong support of her in the way in which she’d reached out to them,” he said.

“I wanted to address the issue of gender balance on the board, and we did that with her appointment – it addressed that issue.” 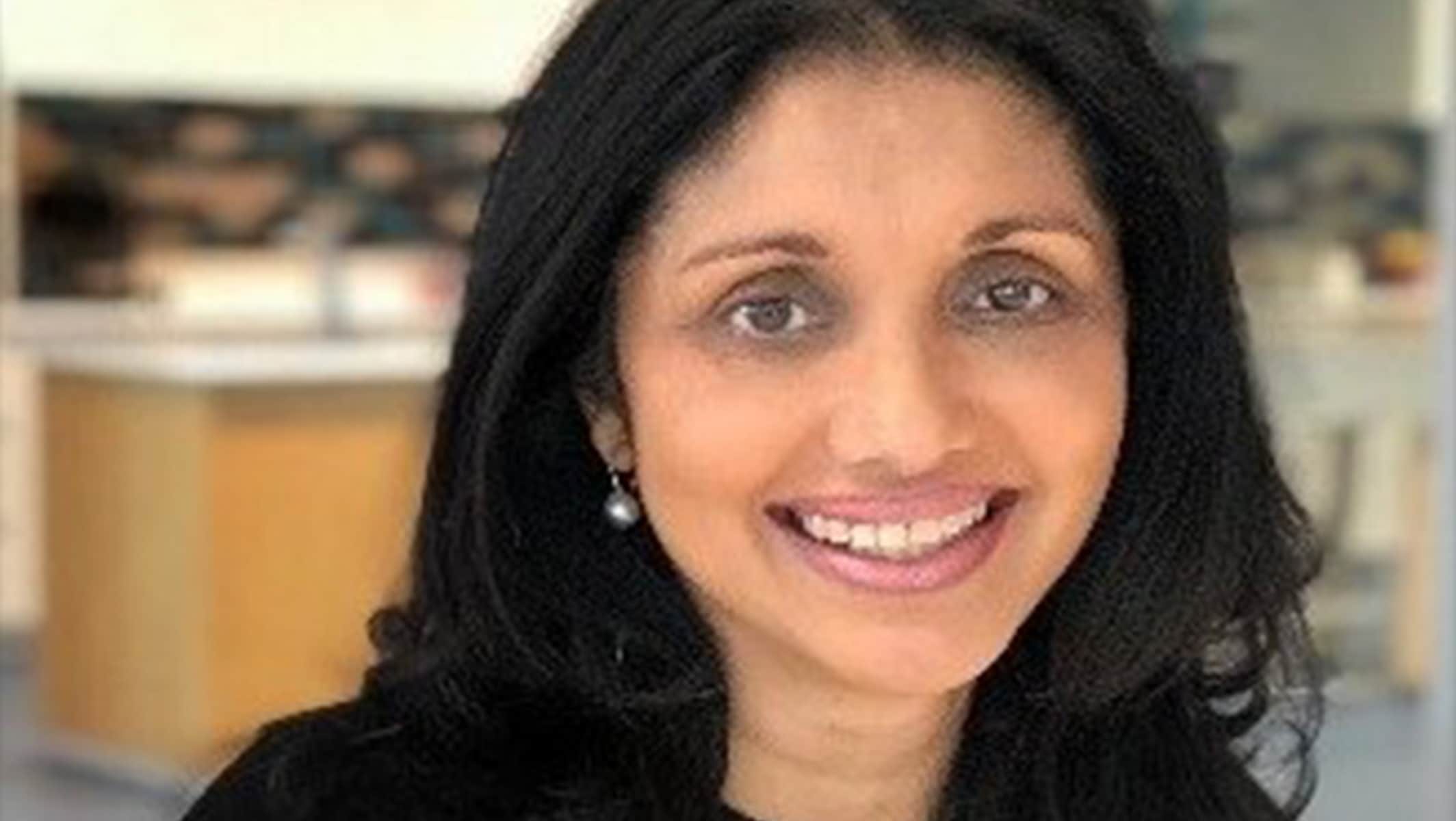 Which is all well and good, but – as astute readers may know – Olsen has a passing understanding of matters electoral, and Notes put to him that the optics of appointing someone to a job they’d failed to win in a democratic election might have been more stringently scrutinised if it happened in the world of party politics.

He disagreed however, pointing out that if someone leaves a casual Upper House vacancy, for example, they’re generally replaced by the next person that missed out.

“You’d go to the next person down the list,” he said.

Meanwhile, non-Liberal Crows supporters may have been pleased to note that the club is also addressing the political imbalance it created via the former Premier’s chairmanship, by appointing current Labor senator Don Farrell as its latest Club Ambassador.

Although, I’m sure neither man would mind us suggesting that it’s noteworthy that they managed to find perhaps the only ALP member who’s arguably to the Right of John Olsen.

Former bank boss Nick Reade made his debut in the Budget and Finance Committee hot seat this week, and was asked about the Government’s much-hyped commitment to a suite of events to fill the void left by the now-abandoned Superloop Adelaide 500.

His boss, Steven Marshall, last year set up a task force to drum up alternatives, saying at the time: “We are committed to a world-class events calendar throughout the year in SA.”

Committee chair, Labor’s Kyam Maher, appeared perturbed by the loss of the V8 race – so much so, he insisted on calling it by the name of its previous major sponsor.

“The Clipsal 500 car race, what events are replacing that and how will they stack up against the income that the Clipsal 500 generated and the jobs that Clipsal generated?” he asked Reade.

But the DPC boss surprised him by replying that he was “not aware of any at the moment”.

“Events SA is undertaking the review and I am certainly happy to take that on notice [but] I am not aware of any at the moment,” he clarified.

“Just to be clear, you are not aware of any single events that are going to replace the Clipsal 500?” Maher pressed on, clearly oblivious to the fact that the Superloop itself technically replaced the Clipsal some time ago.

Reade opted to take the question on notice, but reiterated that he was “not specifically aware”.

He is not aware of a flower event

Rumours are strongly circulating that the government is pondering a Flower Show of some sort, perhaps to augment the state’s green credentials (or its commitment to STEM?)

Notes asked Reade’s department whether he knew of such a proposal, and if so whether it was something he should have informed the committee.

But the agency handballed inquiries to Events SA, saying: “Mr Reade’s evidence to the committee was accurate. He is not aware of a flower event.”

The Tourism Commission seemed keen to dispel the notion that the V8 race would be replaced by any botanic pursuits, but didn’t exactly rule out things coming up roses.

“The State Government is committed to growing our event calendar and supporting the state’s event sector,” they said in a statement.

“When there is an event to announce, we will, as we have been doing.”

They said that “all events in this new COVID-safe era must find the right balance to ensure they can be delivered in this environment, in line with health requirements… as well as providing a strong return”.

“It was always the intention to look at a range of events, right across the calendar and across the state to drive visitation in our regions and CBD, and to target events that can be delivered in this new environment,” they said.