Could it have been a Freudian slip?

A LinkedIn ad linking to the Adelaide Football Club’s page has been spruiking the Crows’ much-publicised vacancy for a new CEO to lead the wooden-spoon AFL club through a new era.

The problem is, there are a couple of glaring inclusions – the ‘one-percenters’, we think they’re called in the football industry.

The ad stipulates the position is to be based in Victoria.

And – unhelpfully given the tenuous hold of club appointees on their positions in such a cut-throat industry – it lists the position as “temporary”. 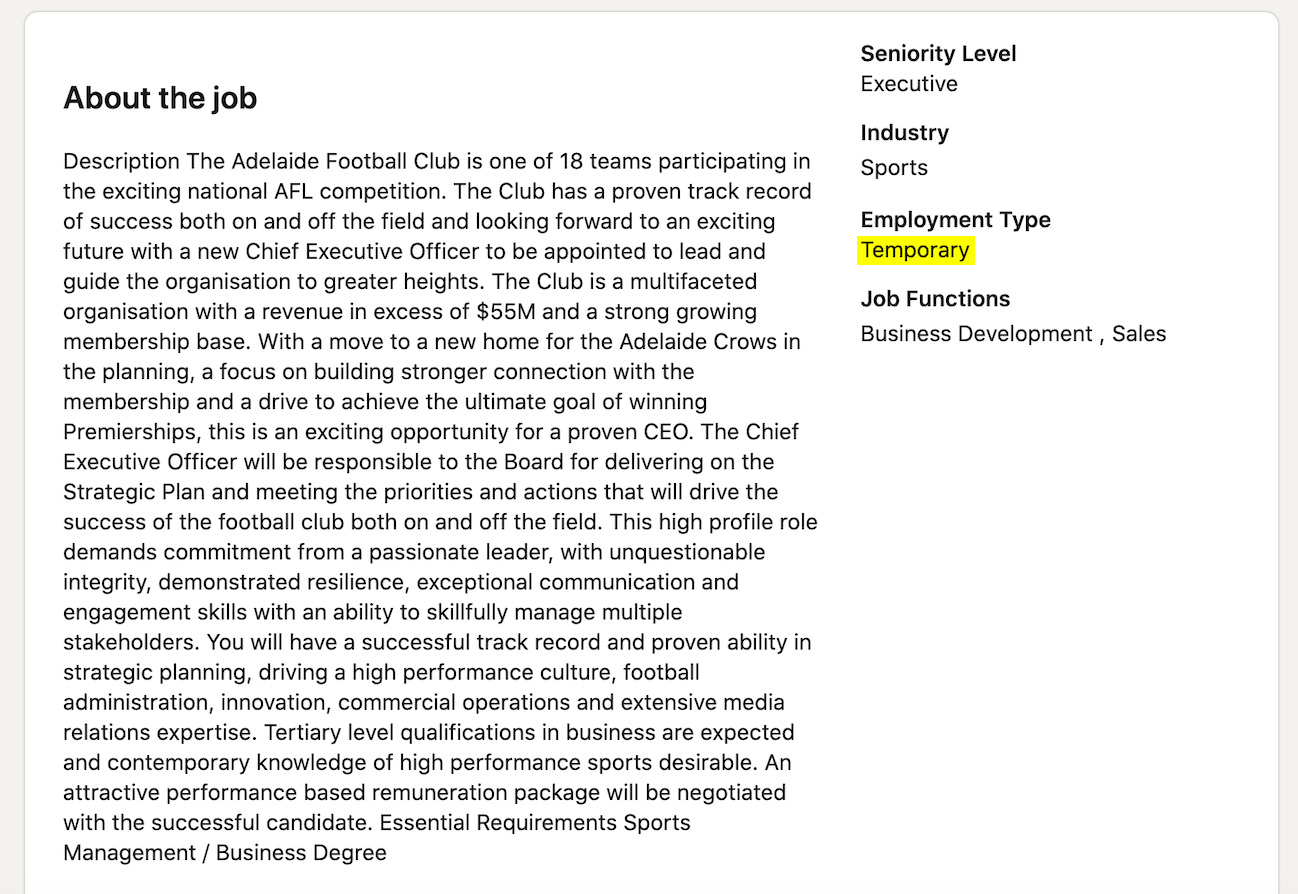 These stipulations could well be considered apt, given the Victorian-centric AFL – which ruffled feathers this week by dubbing its state-level competition, taking in teams all up the eastern seaboard, the ‘VFL’ – notoriously signs off on key Adelaide appointments.

But, fear not: after InDaily brought the curious job ad to the club’s attention, it investigated to discover – as it explained – that it was a “web-scraped” version of the official ad placed on Seek and other sites.

It had been uploaded by a third-party employment agency to LinkedIn, where it apparently appeared on the Crows’ own page after the club was tagged in the post.

The club says it is working with LinkedIn to get the ad removed or amended “as a matter of urgency”.

So any high-powered Victorian-based football administrators looking for a short-term gig, stand down.

Both Liberal and Labor parties are currently going through the preselection rounds, with the Libs set to pick candidates for Schubert, Frome, Mawson and Flinders, while Labor is dealing with less contentious matters. It has opened nominations for all the seats it currently holds, as well as the state’s regional electorates – almost universally blue-ribbon strongholds, none of which it expects or intends to win.

But things will soon get more interesting in ALP circles, with intense discussions underway about a mooted game of parliamentary musical chairs.

But there’s a snag – Florey’s held by former Labor maverick-turned-independent Frances Bedford, whose candidacy would mean the seat was no sure thing for an aspiring Labor MP (just ask former candidate Rik Morris).

Brown well knows this: he took over the seat of Playford from then-Health Minister Jack Snelling, who opted to instead move in on Bedford’s seat before the last election – only to retire from parliament altogether after she opted to fight back.

So, much will hinge on whether Bedford instead opts to contest the marginal Liberal seat of Newland, where much of her former electorate has ended up.

All of which could perhaps prompt some more considered discussion about the utility of the mandated four-yearly electoral redraws.

Many in Labor are certainly hoping Bedford will hurry up and decide: there’s a roll-call of aspirants waiting in the wings to contest Playford if Brown does make the move.

These are said to include Salisbury council deputy mayor Chad Buchanan, and current Northern Territory bureaucrat John Fulbrook, a former SA Government advisor who once ran for the ALP in Liberal-held Kavel.

Fulbrook told InDaily he could “neither confirm nor deny” his interest.