Yesterday, we brought you what appeared to be a resolution to a year-long stand-off that had seen the age-old practice of parliamentary ‘pairs’ put on ice.

In a nutshell, back in February last year, the Government granted a pair to Labor backbencher and noted Solitaire enthusiast Jon Gee – an arrangement wherein if an MP is ill or otherwise sufficiently indisposed, a member of the opposing party will sit out of votes in the interim to cancel out their absence.

But, on a tense day and faced with a crucial vote to suspend standing orders, the Libs deliberately ignored the pairing deal – prompting the Labor Opposition to put a freeze on all such deals for the foreseeable future.

That standoff endured until Manager of Government Business John Gardner was replaced by Stephan Knoll, who this week ushered in “a renewed sense of goodwill” by cutting a new deal with the Labor benches.

The Glasnost spirit did entail one rather humiliating little detail: a public mea culpa, with Knoll forced to stand up in parliament and acknowledge the Government’s “error” in failing to “honour the arrangement”.

He then uttered a sentence it’s likely has never been uttered before in the history of SA politics: “On behalf of the Government, I apologise to the Opposition.”

That was on Tuesday. It’s understood he and Manager of Opposition Business Tom Koutsantonis subsequently broke bread (metaphorically) and signed off on a new deal (literally), which was understood to have covered not merely pairing arrangements, but all “the conventions that allow us to run smoothly”, as Knoll put it in his speech.

This includes granting leave – another convention whereby courtesy is given for members of parliament to expound on questions without notice or give personal explanations.

However, the fruits of Knoll’s atonement were shortlived, with the peace deal put on ice again the very next day.

Evidently Knoll’s frontbench colleague David Pisoni doesn’t do Glasnost – or no-one gave him the memo that granting leave was back in vogue – so when Labor’s MP for Mawson Leon Bignell asked a particularly pointed question about how long his constituents on bushfire-hit Kangaroo Island have to wait “to have the wreckage of their 89 homes cleared” – before seeking leave to explain the question – the leave was categorically denied.

This prompted quite the kerfuffle in the House, with the Liberals’ Regional Development Minister Tim Whetstone and Labor Whip Michael Brown both turfed by the Speaker for half an hour, along with Koutsantonis himself, who shot a parting barb to the Government benches on his way out: “Don’t ever do a deal with me again, ever!” 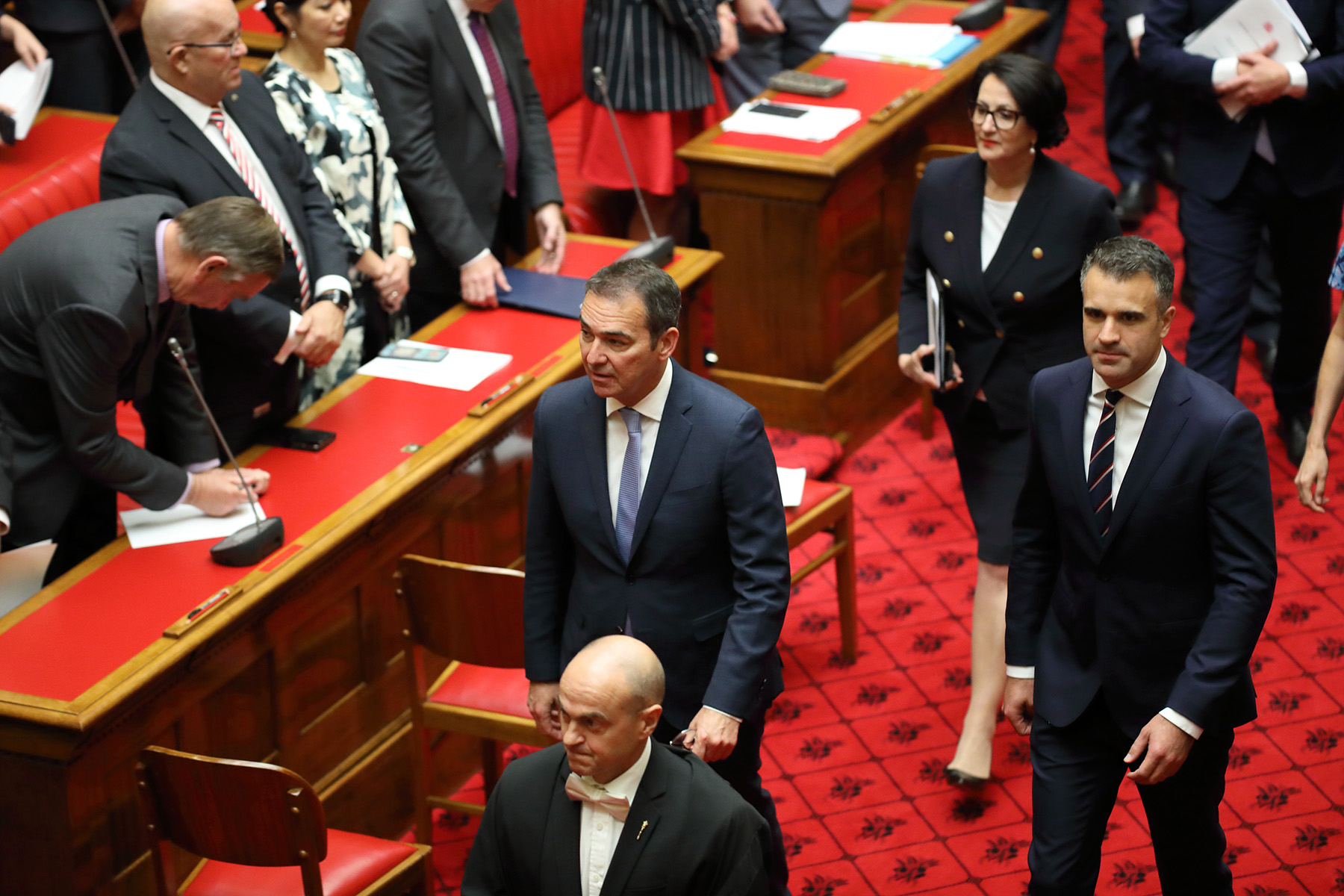 He evidently used his time in the naughty corner to pass on to Knoll that the era of Glasnost was over, telling InDaily: “I’m stunned – they broke the deal in less than 24 hours!”

24hrs after this appropriate apology by @stephanknoll reinstated pairing & leave arrangements between the Government & the Opposition in the House Minister @DavidPisoniMP breaches the arrangements again & breaks a centuries old practice.

Either they’re untrustworthy or a rabble pic.twitter.com/DixxPFhFIU

“These things only work on goodwill – either you’re allowed to seek leave, or you’re not. But for the last 100 years, parliament has allowed leave,” he said.

The peace deal duly shelved, Knoll evidently had a swift word in his learned friend Pisoni’s ear, which we imagine went something along these lines:

The chastened Minister for Innovation and Skills then returned to the House to (again) make amends, via a personal explanation.

There’s only one problem, but we’ll let Speaker Vincent Tarzia explain, via Hansard:

SPEAKER: Leave is sought; is leave granted? Leave is not granted.

PISONI: With your indulgence, sir, a matter was raised earlier…

SPEAKER: Minister, I am advised that leave is required. You may want to contribute to the grievance debate, which is about to occur, but leave has been sought and leave has been declined respectfully, minister.

As far as apologies go then, Pisoni had all the tact of Otto from A Fish Called Wanda. 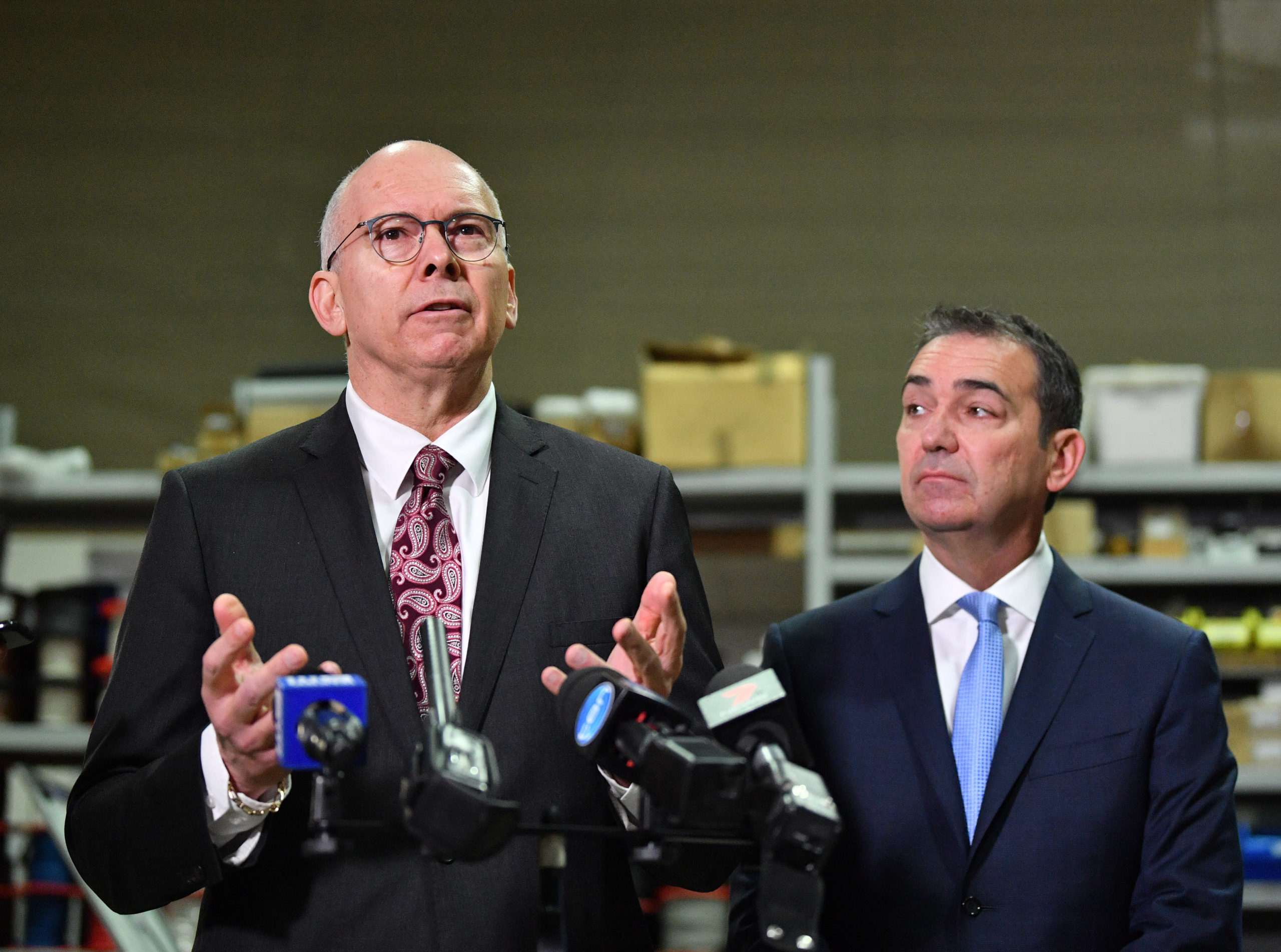 Marshall may have looked at his minister with the same expression in parliament yesterday. Photo: David Mariuz / AAP

Even more chastened, he then returned to his feet during the grievance debate – after former Liberal crossbencher Troy Bell gave up his spot to allow him to speak – to offer the most abject of concessions.

“Earlier during Question Time, the member for Mawson asked for leave and I refused that leave, which was my misunderstanding of the arrangements that were negotiated with the Opposition,” he began.

Had he left anyone out? The Opposition thought so, with one interjector offering: “You should apologise to your whole party!”

Which, to be fair, he probably did behind closed doors.

The hapless frontbencher went on: “I wanted to make that clear because I am certainly not a person of malice and I am certainly very much a team player.”

“Had I obviously not misunderstood the terms of the agreement then I would not have withheld or withdrawn leave… I know that it has been a very difficult time for the member for Mawson and I share the grief that he is experiencing as the member responsible for Kangaroo Island.

“I feel that I have embarrassed him and I apologise for doing so.”

However, the plot thickens…

The three Lower House independents – Bell, Frances Bedford and Geoff Brock – had continued to grant pairs for absent Liberal MPs during Labor’s ban… but no more.

Bell says the trio revolted after Knoll – perhaps confident of his peace deal with Labor – this week scrapped the time allotted for private members’ motions, instead giving Government ministers a platform to opine about the Liberals’ agenda.

Bell, who was singularly unimpressed, noted that the Government had the option to schedule its own business in a late sitting on Tuesday, but opted not to so that members could attend a state dinner for their much-feted space launch instead.

“All the work we’ve done on our private members’ motions was just thrown out the window,” the former Liberal said, adding that the late notice given to the crossbenchers showed “a level of arrogance which I don’t think is acceptable to us as independents trying to work with the Government on the smooth running of the House”.

“As it stands,” he said, “Labor’s not granting pairs, the independents aren’t granting pairs and the Libs only have a one-seat majority at the moment [with the much-publicised absence of Sam Duluk] so they’re pretty hamstrung for the foreseeable future from having any ministers or MPs outside the four walls of parliament.”

“It’s really put the Libs in a parlous position – no minister will be going anywhere for the foreseeable future until I get a private members’ motion back on the table,” he said.

“Until that’s addressed, I won’t be giving any pairs [and] as a bloc of independents we’re not granting any pairs at all.”

It’s not a dream start for Knoll, who it’s understood was elevated to the Government Business role explicitly to mend bridges with the Opposition to improve the running of parliament.

“The trashing of convention does have consequences and I think the Liberals are going to wake up to themselves that this will have pretty serious consequences on the running of the House going forward,” Bell argues.

No-one from the Government responded to inquiries.