What a load of rubbish

This month’s Governor’s speech to mark the opening of parliament enthused that for more than 40 years, “South Australia has been recognised as our nation’s leader in waste management and resource recovery”.

The State Government, Hieu Van Le continued, will extend this leadership “by establishing our state as the national epicentre for the waste and resource recovery industry”, with a focus on “developing remanufacturing of recycled materials, growing our organics waste industry and educating our community about how it can contribute to our state’s leadership in waste management and resource recovery”.

All well and good, but Greens MLC Mark Parnell reckons it’s a case of ‘do as I say, not as I do’.

He’s kicking up a stink about State Parliament’s own recycling efforts – and has written to the Joint Parliamentary Services Committee three times in the past year seeking action on the matter.

Last March, he wrote to the then-presiding member Andrew McLachlan – who is now ensconced in the Senate – saying: “I’ve been concerned for some time about how Parliament House deals with waste.”

“I recall that when I was first elected, tonnes of newsprint went to landfill from this building every year – now we do much better with paper and cardboard recycling,” Parnell noted.

However, “I have become aware that recyclable items including empty glass bottles, plastic bottles and aluminium cans generated in Parliament House are no longer being recycled but disposed of with the general waste.”

He said this included ‘CDL [container deposit legislation] scheme’ containers along with other recyclable material. 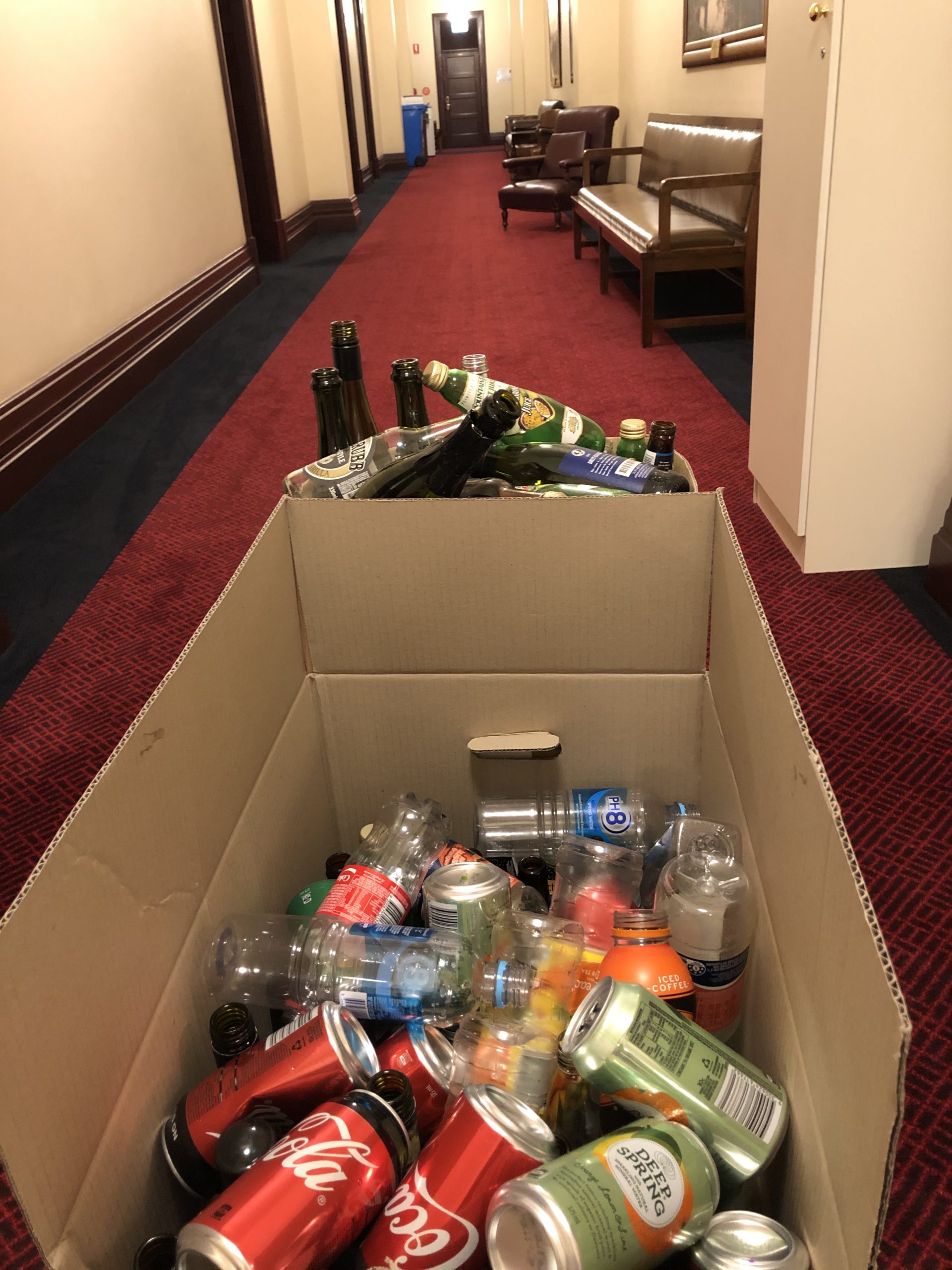 “I understand this applies to waste generated in the Blue Room [the parliamentary mess hall], Dining Room and at catered events,” he went on.

“If this is the case, it is a poor reflection on Parliament, which in my view, should be a leader in modern environmental practice.”

He said constraints such as building works were “no excuse for Parliament not to behave as we expect the rest of the community to behave”, particularly with the Marshall Government lauding its own efforts to reduce single-use plastic waste and improve recycling.

[The Greens, incidentally, had a single-use plastics Bill sitting (unnoticed) on the Notice Paper for over a year.]

“I would like [the committee] to look into this matter and see what can be done to ensure that all recyclable material is separated from the general waste stream and appropriately recycled.”

Almost a year on, Parnell tells InDaily he’s getting “increasingly frustrated at the lack of any serious recycling effort”, saying “most of the glass, metal and plastic – including wine bottles, deposit bottles and cans – are going to landfill, as is all organic waste”.

He says “one of the most important things you can do to help reduce greenhouse emissions – and landfill fees – is to divert organic waste, including food waste, away from the general waste stream and into the green organics stream”.

“It’s what we do at home, but not in Parliament House – as far as I can see, all food waste goes to landfill,” he says.

Parnell and his staff have even begun their own reconnaissance missions, regularly coming in on weekends to gather up a haul of glass and plastics from the general waste – there are no non-paper recycling bins visible in the rubbish station outside the building. 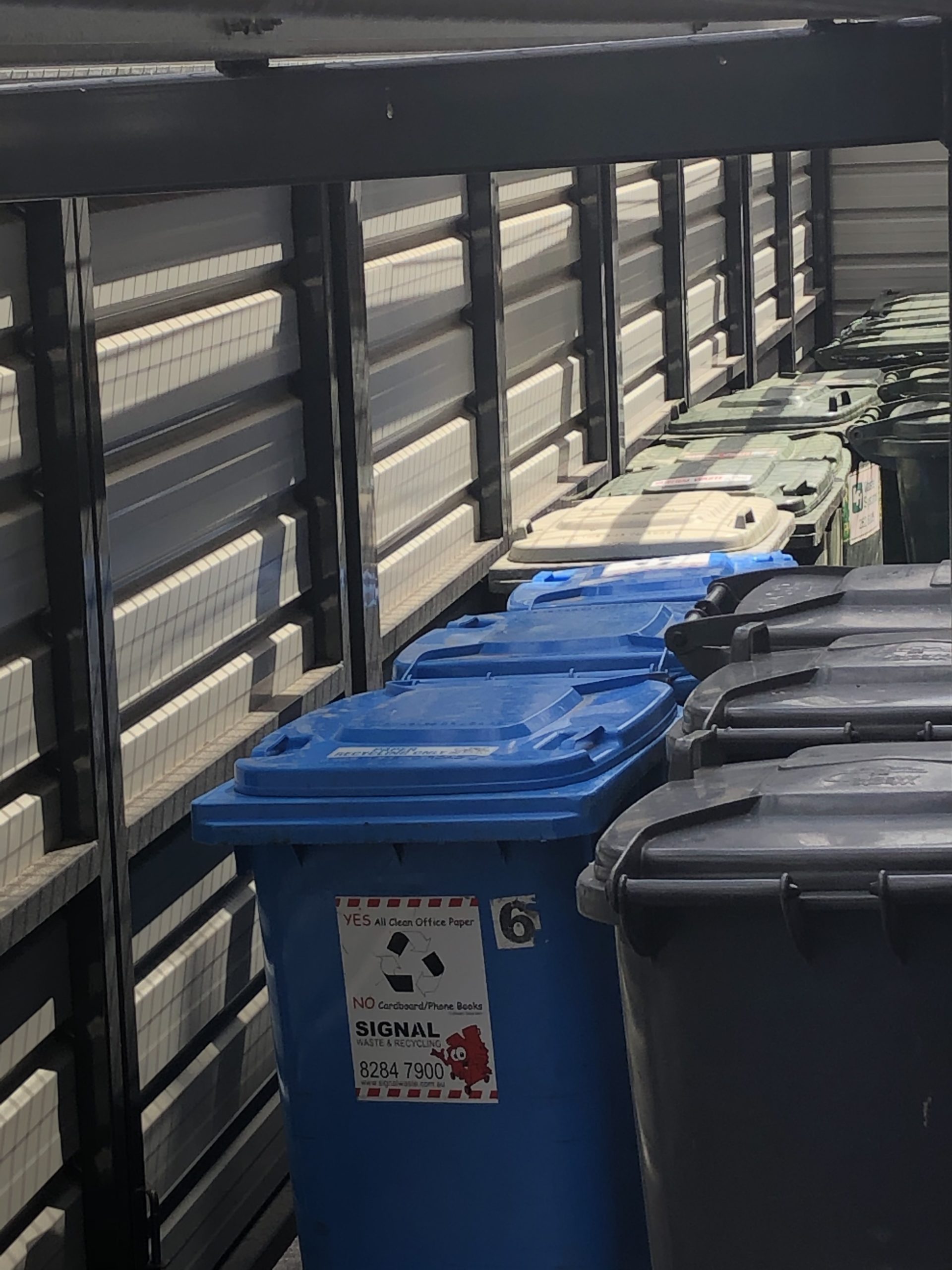 The recycling haul is generally deposited at Parnell’s local recycling centre and the proceeds donated to charity, but one staff member has even taken to “sneaking it out the front and giving it to homeless people” to trade in.

The MLC laments that despite politicians expecting the rest of SA to recycle appropriately, “at our own workplace, it’s literally rubbish”.

“It seems to me that there is a major credibility problem when Parliament is considering these issues for the rest of society, but can’t get its own act in order,” he argues.

Parnell says he’s had no formal response to his repeated correspondence, although new Upper House president Terry Stephens said the matter had been regularly discussed at Joint Parliament Services Committee meetings, insisting his predecessor McLachlan gave the matter due “gravitas” – but suggesting “bureaucracy” played a part in hampering efforts to address it.

For his part, Parnell describes the Committee as an “unaccountable fiefdom that runs the building”, whose agendas and minutes are “top secret, and there is no clear avenue to engage with them”.

He may be on to something – a search of his files revealed he first wrote to the committee on this issue, suggesting a ‘waste audit, way back in 2008!

Such a good voxy

And it’s no exaggeration: as the MP himself told Monday night’s state electoral conference meeting at his Waite electorate office, television media have for days been camped out outside his office, his home and even his parents’ house, after police reported him for basic assault over allegations he groped SA Best MLC Connie Bonaros at a Parliament House Christmas party (side note: we understand said party would have provided a solid haul for the Parnell office’s recent recycling efforts).

The networks also took the opportunity while in Duluk’s electorate to canvass the views of the ordinary voter, via that tried-and-tested straw poll so beloved of electronic media: the ‘voxy’.

‘Vox pops’, or ‘voxies’, are derived from the Latin vox populi – literally, ‘the voice of the people’.

They’re essentially a device for airing the views of the proverbial man – or woman – in the street.

Or alternatively, a device for filling up a few seconds of airtime when you can’t get anyone else to front the camera.

Still, the good burghers of Waite were happy to oblige, with 100 per cent of each the two people shown on Seven and Nine’s respective news services less than impressed with their MP’s alleged behaviour. 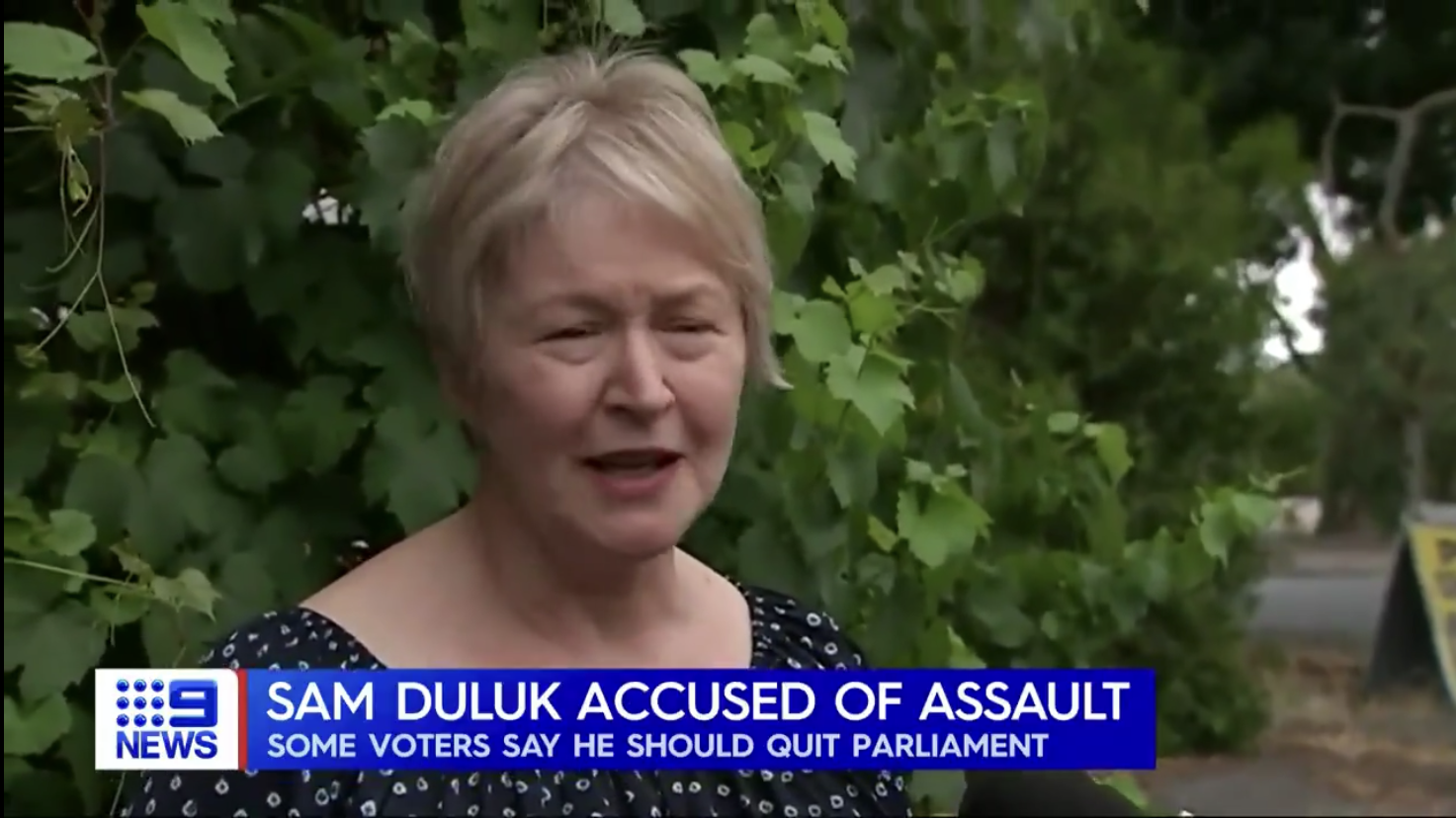 An interviewee on Channel Nine.

One very vocal respondent popped up on both channels, described by each as a constituent but otherwise unidentified. 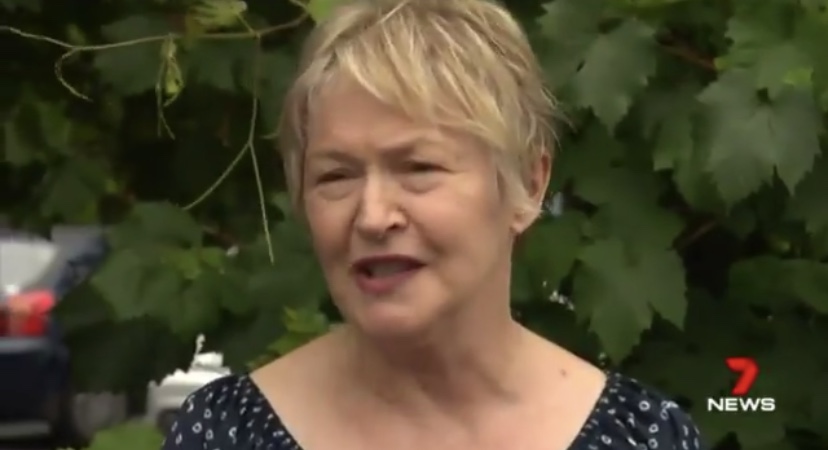 And here she is on Channel 7.

Still, she was what the ‘teevs’ are wont to call ‘good talent’, summing up the thoughts of Waite constituents by declaring “people are fed up, frustrated and angry” and “there have to be consequences”.

“I just don’t know how [Duluk] can just stand up and be part of the community,” she scoffed on Seven.

Mind you, it might have been pertinent for the networks to point out that this was no ordinary punter.

In fact, it’s Lyn Such – whose late husband Bob was the former long-serving MP for Fisher (now Hurtle Vale) until his death in October 2014.

And she was no fan of Duluk, even before his recent indiscretion.

Duluk was the Libs’ candidate against Bob, a one-time Liberal-turned-independent, at the 2014 election – a campaign Lyn considered the nastiest of his 25-year political career.

She even recently wrote to voters in Davenport (which Duluk won in a 2015 by-election before shifting to Waite at the 2018 poll), claiming the Duluk campaign had involved “a scurrilous attack on Bob’s integrity and standing in the community”, and that her late husband had “never encountered such blatant, false and misleading pre-election materials as he did during the 2014 campaign”. 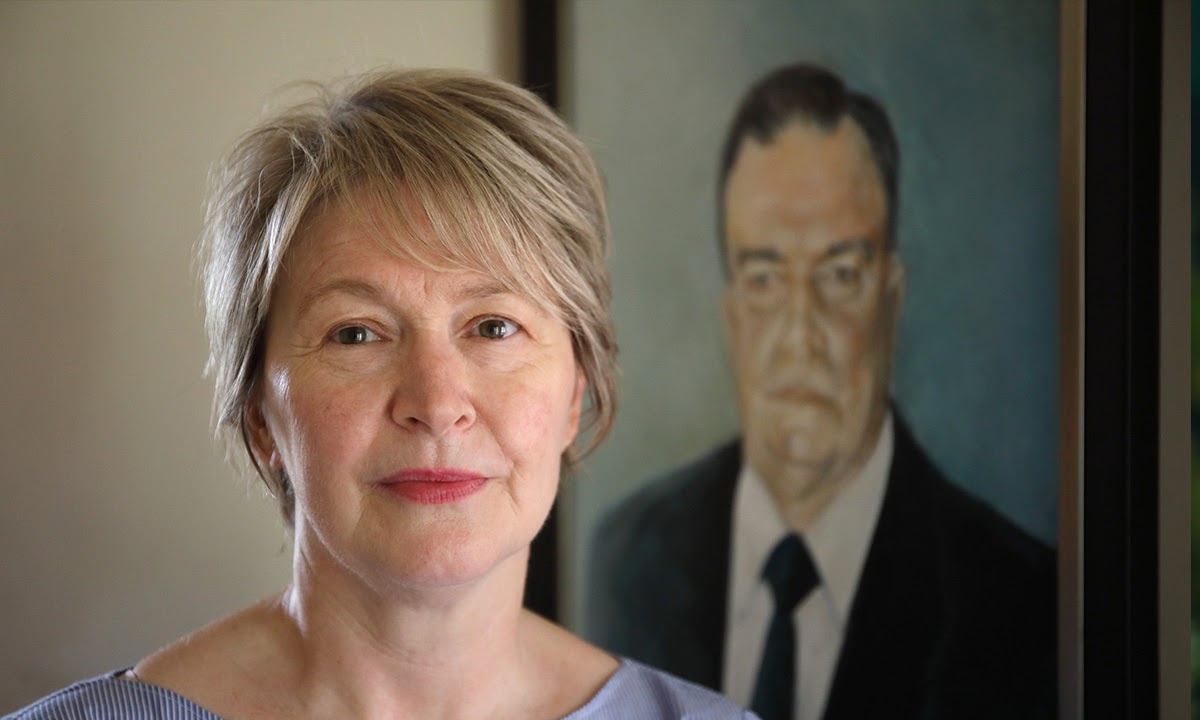 Lyn Such photographed by InDaily in 2017. Photo: Tony Lewis / InDaily

A pertinent voice then perhaps, but not exactly the voice of the people…

Time to grow a pair and apologise

One might ponder whether Duluk – who has flagged a leave of absence from parliament until his legal woes are concluded – helped spur a rare apology from the Government to the Opposition last night.

This time last year, with the Marshall administration facing heat after a Royal Commission poured scorn on its Murray Darling negotiation efforts, the Government deliberately failed to honour a ‘pair’ arrangement with Labor for an ill backbencher.

Pairing is a standard parliamentary convention whereby if a major party MP is absent from the chamber, the other party agrees to withdraw one of its own members for the equivalent time.

In response, Labor announced it would no longer enter into such arrangements  with the Libs – a standoff that has endured ever since.

The stoush came about when John Gardner was manager of Government Business in parliament – it’s understood Labor has long told the Libs they’d restore the status quo if Gardener apologised, but he never did.

However, he’s now been replaced by Stephan Knoll – who was quick to take a more conciliatory tone.

In parliament last night, he enthused that “the new year brings a new job” and pointedly noted that “I certainly see my role as upholding the traditions of the House”.

On which point, “I did want to take the opportunity to be able to deal with a matter that has been ongoing in this House and one that I think we need to deal with”.

“The pairing arrangement was in writing and agreed to between the Whips. The Government did not honour the arrangement and that was an error…

“On behalf of the Government, I apologise to the Opposition, and in particular to the member for Taylor.”

Well, knock us down with a feather!

Knoll went on to “assure the House that in future all pairing arrangements agreed by the Whips or respective managers of Government or Opposition business will be honoured for all votes of the House”.

“With a renewed sense of goodwill, I think there is an opportunity for us to make sure that this House operates and maintains the conventions that allow us to run smoothly.”

A cynic might ponder whether this renewed sense of goodwill was prompted by the fact Duluk’s prolonged absence will make the Government’s majority a tad tenuous on the floor of the House.

Nonetheless, Labor’s manager of Opposition business Tom Koutsantonis notes that the Libs have had a hard time with the lack of pairs regardless.

“It’s made parliament almost unworkable – and it was driving them crazy,” he says.

The apology out of the way, pairing arrangements will now resume – although Labor certainly won’t be providing one for Duluk.