Has the Mt Barker District Council produced the most egregious piece of spinning in South Australian local government history?

This week it chopped down four very old and very significant River red gums to make way for a sports ground on Springs Road, on the fringe of the rapidly expanding town and, unfortunately for the council, within eyesight of the property belonging to ABC gardening guru Sophie Thomson.

Three of the trunks – after the trees were chainsawed a few metres from the ground – were craned into nearby holes, to be retained at the site as wildlife habitat.

In its initial Facebook post on the matter, the council avoided any mention of the fact that it had killed the trees – some of which were up to 300-years-old – opting for this word salad. 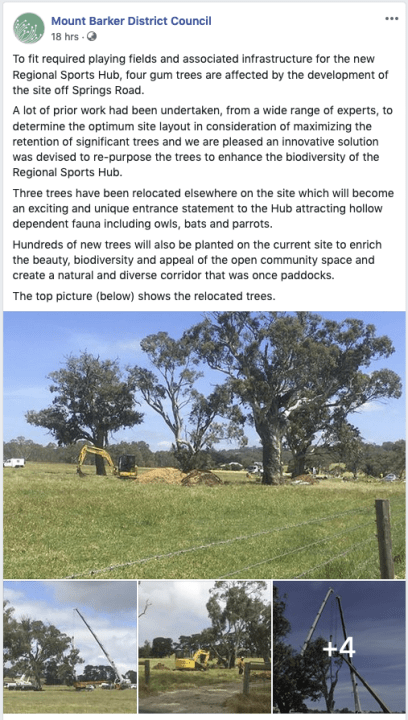 That misjudgment, which appeared to genuinely confuse a few locals who wondered if the roots would regrow, was called out by hundreds of angry townsfolk, including Thomson, who evoked Dr. Seuss’s The Lorax.

She described the council’s behaviour thus: “While I agree that keeping dead trees with hollows (that take 80 to 100 years to develop) is vital for wildlife, at what point did we decide its OK to cut down living ancient giants to make dead trees, all for the sake of moving a driveway 20 metres!!!!!!”

Following up the ABC, which broke the story, The Advertiser produced an article framed in such a strange way that we can only present it for your consideration (the print version had the perky heading: “By Gum! What a move”):

Later that day, the council’s arborist, Chris Lawry, who was photographed by the Tiser on the stump of one of the giant trees, appeared on David Bevan’s ABC Radio Adelaide program saying he had fought against the trees’ destruction.

Lawry, known in the district as a fierce advocate of retaining native vegetation, appeared to be distressed by the trees’ loss – a very different picture from the council’s initial spin.

He said that when it became clear that the sports hub plans would not be changed (due to site constraints, according to the council), he tried to salvage something from the death of these trees, which he believed would continue to live for centuries more if they’d’ been left intact.

“I am not trying to polish a turd here, but we’ve rolled it in glitter at least,” he said.

So who is responsible?

While the council could have refused approval to cut down the trees, all three tiers of government are involved.

The council kicked off this project 10 years ago, purchasing the land with a State Government grant. The concept designs were produced five years later by the council, with assistance from the State Government.

Concept plans were approved in May last year, subject to funding – which was given a boost in July, only 10 days before the Mayo by-election, thanks to a $4.4 million injection from the then Turnbull Government.

And who was sent out to spruik it? Liberal candidate for Mayo Georgina Downer – who this week revealed she is moving back to Victoria after two unsuccessful dips at the seat once held by her father, Alexander.

The council appears to be a bit snippy with the local community for not engaging enough with its consultation process on the sports hub, which it says made it clear that the trees would be removed.

So it’s the community’s fault they didn’t read the plans properly nor trawl through documents on the council’s website?

It seems the sense of responsibility at the council isn’t quite dead – it’s just been relocated.

Despite deep concerns in racing about the appointment, the key players are keeping quiet, probably because the Government now holds the industry by the short and curlies thanks to a multi-million-dollar “stimulus package” which was accompanied by a change to governance arrangements which gives the Minister the whip hand in who gets appointed to the Thoroughbred Racing SA board.

It’s a difficult time for the horse racing industry, with growing questions about animal welfare getting a wide airing across Australia due to this very disturbing ABC report produced last month.

In South Australia, though, the disquiet has been less noticeable, as noted by former Racing Minister Leon Bignell in Parliament a few weeks ago.

Bignell, who had a combative relationship with the racing industry during his term in charge due to his call for the TRSA to ban “barbaric” jumps racing, said he had no evidence that the sickening treatment of retired thoroughbreds detailed by the ABC was happening in South Australia.

But, he suggested, why was there a “vacuum” of comment and concern in South Australia about the issue?

“I think all these things are being done in other parts of Australia, but for some reason we do not want to talk about it here. I think we need to talk about it. I think punters need reassurance. The industry needs to back itself and explain to people that things are indeed above board in South Australia.”

Notes on Adelaide is a column telling the inside stories of Adelaide people, politics, institutions and issues. If you have information that you believe should be noted in this column, send us an email: editorial@solsticemedia.com.au