Our ever-effervescent Premier Steven Marshall raised eyebrows a few weeks back with his upbeat assessment of the state’s unemployment woes, after the jobless rate spiked to a nation-high 6.9 per cent.

He insisted there was no problem with unemployment in SA – “none whatsoever” – arguing that in fact “the trajectory is very, very positive – much better than we’ve seen for the last decade”.

The trajectory, however, continued the other way last week, when the Australian Bureau of Statistics released the jobs figures for August, with SA’s headline rate spiralling to 7.3 per cent – its highest point since 2016, when the then-Opposition Leader’s well-worn mantra lamented a “dangerous jobs crisis”.

But Marshall’s tone was decidedly different.

In his keynote speech to InDaily’s SA Business Index luncheon last week, the Premier raised eyebrows again by doubling down on his optimistic assessment of the ABS data – even suggesting it might be time to pop the champagne.

“Actually, yesterday in some ways was a day of celebration,” he told an audience comprised of hundreds of business figures at the Convention Centre.

“We have this incredible situation where we have both employment growth and unemployment growth simultaneously [and] we actually reached the highest employment rate in the history of our state – we had more people employed in SA than ever before,” he said.

“But the reality is that the participation rate has significantly outstripped this – so we’ve got to say to ourselves, ‘it’s great that we’ve got more jobs in SA than we’ve ever had before, but we’ve now got more people in this state wanting to participate in employment than we’ve ever had before… that’s a great challenge to have as a government, and it’s certainly one we’re up to delivering on.”

The good news for Marshall is that Associate Professor Michael O’Neil from Adelaide Uni’s SA Centre for Economic Studies agrees that there’s been a lift in employment growth, so “there might be a component of a more positive employment outlook in SA” – although he notes “that lift was mirrored nationally”.

But the bad news is that O’Neil reckons SA’s unemployment woes are best viewed over the longer term, in which context the transitioning SA economy “is still not generating enough employment to make an impact on those unemployment numbers” – and “I don’t think there’s a lot that Marshall can do, to be honest”.

“You’re not getting that increased demand for all those services. So you just don’t have any impetus, like Victoria in particular has had, to make a big dent in those unemployment numbers,” he said.

When you look at the long-term trend, he notes, “you really do see a consistency in the pattern in SA relative to NSW and Victoria, which have had much better employment numbers because they’ve had very significant population increases, and they’ve had the [consequent] consistency of housing construction”.

He said much of the increase in employment and jobseekers was due to women joining the workforce, but warned there may not be much for Marshall to enthuse about in the longer term.

“I’d be surprised if in the next set of figures there’s a significant reduction… the worrying thing now is that the economy is showing signs of slowdown.

“It’s probably due to [the fact] there aren’t a lot of major construction projects coming online at the moment.

“Whether it’s Labor or Liberal currently in government, I think the reality is it’s fair to say the economy is in transition… we’re not going to see significant pick-ups in manufacturing, and you’re never going to get back to the sort of manufacturing employment we’ve had in the past.”

Fortunately, the Liberal Party knows the answer, because they asked that exact question of residents in the Adelaide Hills a couple of months back, in a failed robocall survey that annoyed residents by accidentally waking them up between 6.15am and 7.30am – on two successive days.

At the time, Marshall decried the bungle as “completely and utterly unacceptable”. 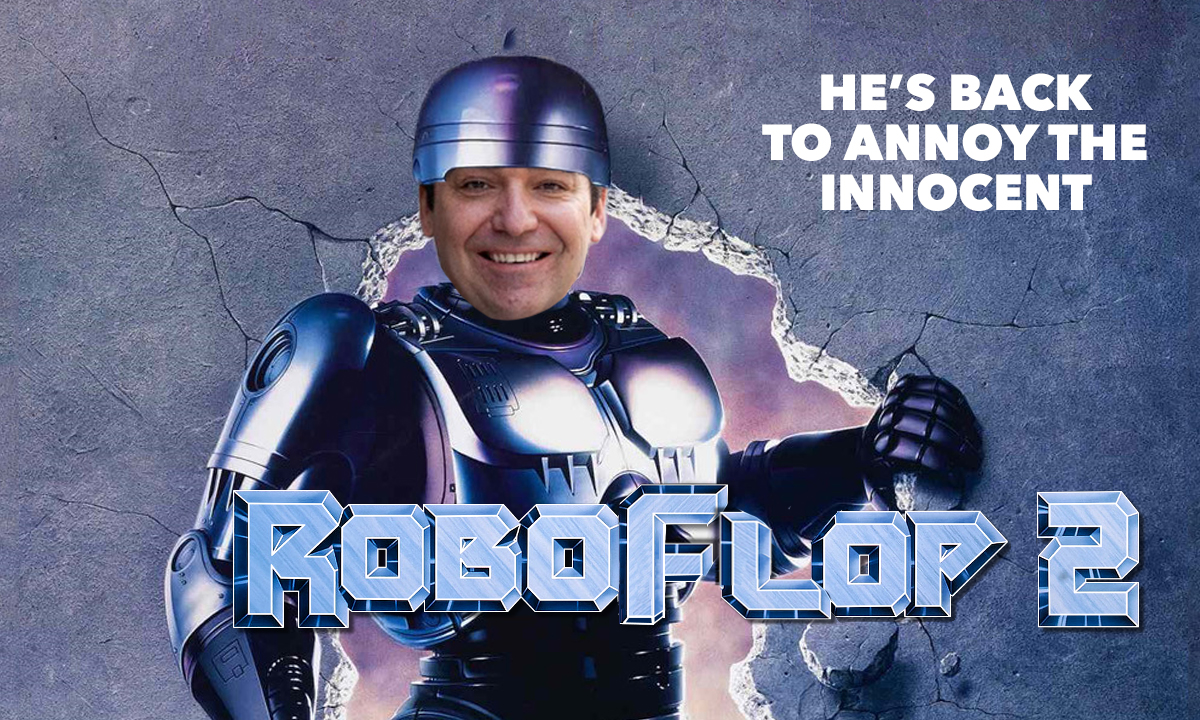 Unsurprisingly, the national telecommunications regulator the Australian Communications and Media Authority (ACMA) agrees, and this week firmly – and formally – admonished the SA division of the Liberal Party for “making polling robocalls during prohibited calling times”.

“Australians have a right not to be disturbed by these types of calls early in the morning,” ACMA chair Nerida O’Loughlin said in a statement.

“They can be frustrating for people who are preparing for work and school or expecting contact from family.”

ACMA noted that prohibited calling times are set out in the Telemarketing Industry Standard, and “apply to all telemarketing and research calls, including opinion polling” using autodiallers.

“If researchers or pollsters are using these types of systems, they should carefully check settings and install fail-safes,” O’Loughlin said.

“If we see further evidence of research calls during prohibited calling times, we may look at compliance more broadly across the sector.”

While Marshall’s looking on the bright side, his predecessor Jay Weatherill is continuing to fill his post-political retirement time with pet projects.

InDaily reported in March that he was advising the Sydney-based New Democracy foundation on a project looking at ‘Democracy Beyond Elections’, while he’s also been seconded by his former colleagues to rake through the entrails of federal Labor’s election loss.

He was also keen to turn his hand to the early childhood education space, and is now an official ambassador for the Italy-based Reggio Children Foundation, an international non-profit established to promote the Reggio Emilia educational approach championed by Weatherill’s former ‘Thinker In Residence’ Professor Carla Rinaldi.

In the same vein, he’s joined a governance group established by the Australian Research Alliance for Children and Youth to “develop a comprehensive and collaborative set of research priorities”.

But he’s still keeping his hand in with spreading the word on ‘Deliberative Democracy’ – a concept his government championed via the Citizens’ Jury model, with varying degrees of success.

He tells InDaily he’s been asked by the New York Times to participate in a Democracy Forum in Athens next month, on a panel exploring “the relative demise of mainstream parties”.

He’ll share the panel spotlight with former Greek PM George A Papandreou, but perhaps more noteworthy is the man who takes the stage immediately after him – Steve Bannon, the man who helped orchestrate the rise of Trump, who will be debating the merits of globalism versus nationalism with philosopher, filmmaker and activist Bernard-Henri Lévy. 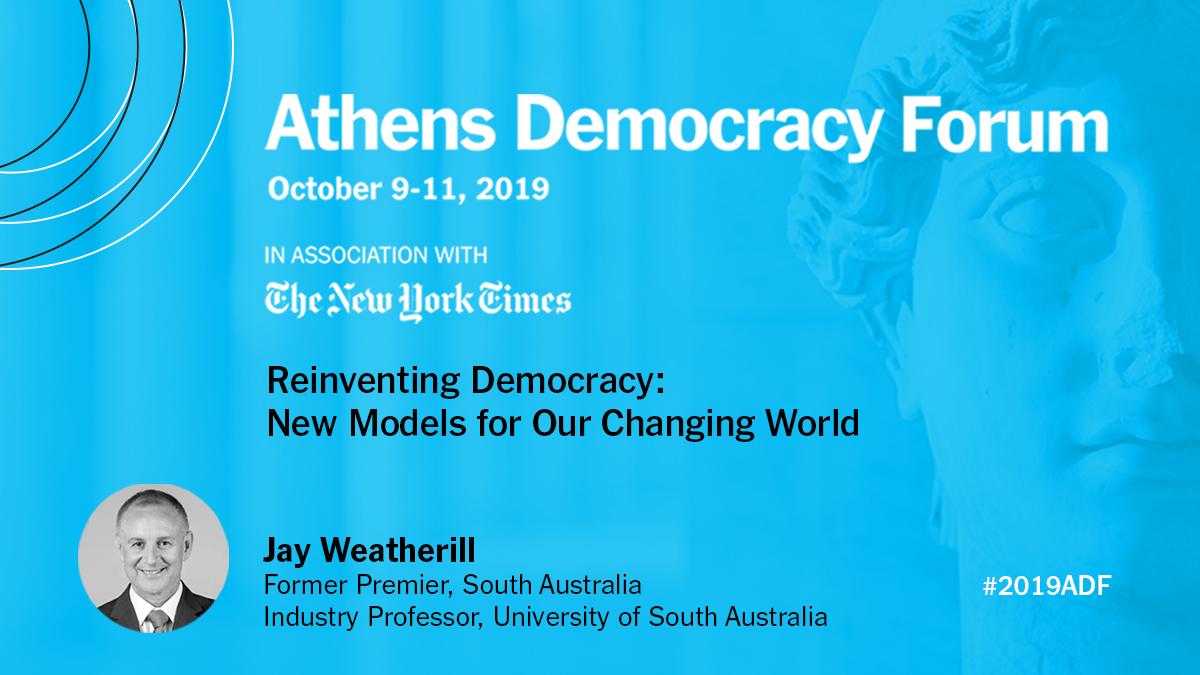 A promotion for the event.

Meanwhile, the man he replaced as premier, Mike Rann, recently joined the inaugural board of a Kiwi startup – New Zealand Future Forest Products – with plans to invest $900 million in “innovative timber technologies” with a view to exporting “to satisfy demands for housing in Asia”.

The New Zealand-raised, London-based Rann said there was a “massive demand for millions of new homes to be built throughout Asia as its rapid urbanisation continues”.

“NZFFP’s goal is for New Zealand to be the export hub of new timber construction technologies internationally,” he said.

“I was keen to join the board of NZFFP because of its practical embrace of technological innovation to cut emissions while at the same time building an industry… [it] will plant millions of trees and create new jobs benefitting New Zealand’s regional communities.”

Which at least sounds like good news for New Zealand’s employment prospects.