The debate over land tax aggregation has always been a fraught one for the Liberal State Government – not because it affects a broad sweep of the voting population, but rather because they had managed to annoy many heartland Liberal voters: well-to-do, professional, financially-savvy.

The fallout has seen longtime party members and donors sever ties, with some repeatedly venting their spleen on social media and even canvassing the prospect of a breakaway ‘True Liberal’ movement.

One who has done both these things is Unley dental surgeon Timothy Goh, who found himself the centre of some unwanted national exposure today when The Australian newspaper ran a story detailing his “passion for luxury cars” and “private dental practice in the exclusive Adelaide suburb of Unley”.

“Liberal sources believe Timothy Goh’s affluence shatters the ‘mum and dad’ investor line and bolsters their argument that the only people negatively affected by the changes are a minority of well-off South Australians who use trusts to minimise their land tax exposure,” the article notes.

“They also say Dr Goh invited scrutiny on himself by using his Facebook page to mount personal attacks on Mr Marshall.”

It then quotes “one Liberal MP” as saying: “You can’t knock a person for getting ahead but driving around town in a Bentley doesn’t really sit with the whole ‘mum and dad’ investor line.”

Goh today posted a lengthy retort on Facebook, detailing the “enormous stress and anxiety” wrought by the aggregation changes – which will now reap $86 million in revenue as part of a broader reform that will see the top land tax rate slashed from 3.7 to 2.4 per cent.

“Is the best use of your time and our tax dollars spent attacking a private citizen, taxpayer and voter?” he asked the Government.

“Shouldn’t you be trying to improve this state instead of using the resources of SA to try to satisfy personal vendettas? The highest unemployment in Australia is not a problem but a middle aged dentist in Unley is? Why didn’t you have the guts to have a go at [property moguls] Steve Maras, John Culshaw, Sam Shahin, and the many other business leaders who have come out in the media against your policies in a national newspaper?”

“Are you that desperate that you and your spin doctors have decided to try to silence me and others who are scared and angry about what your new Land Tax will do to our businesses, our families, and SA?”

Goh, who appeared in Business SA material as an affected investor, denies being “enlisted” into the campaign, calling the idea “insulting”.

“I have attacked Marshall and the others on my own volition because what they are doing is wrong and destructive to jobs, people’s livelihoods and our state,” he writes.

“When I enquired from MPs I knew for many years, they did not respond. Most of us who are scared for our businesses and this state are not part of a conspiracy, and most didn’t even know each other until you forced us together.”

He said sneering at his purchase of a $300,000 Bentley, a photo of which he had posted on Facebook, had “cheapened one of my car dream achievements that I had looked forward to and aimed towards for two decades”.

“Everyone in Adelaide knows what cars I drive… I drive them to work. I drive them to car meets. I have personalized plates. It was my dream when I was growing up. I am living my dreams with my money that I earnt and paid plenty of tax on,” he wrote. 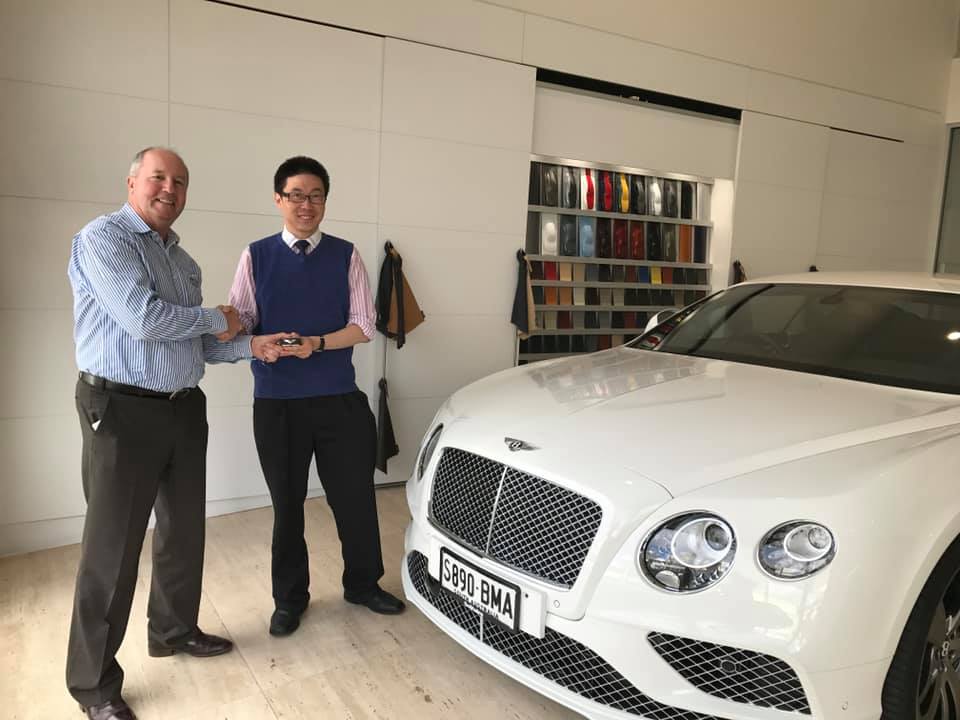 Goh reposted the photo today of him taking ownership of the Bentley.

“Is it the Liberal Party’s agenda that you shouldn’t aspire to own a sports car? That a guy who worked at KFC shouldn’t try to achieve more?

“Trying to attack what I have achieved is a low, low act. Should government not want to encourage success?”

Goh noted he had been “a Liberal party supporter all my life and count several of your MPs as friends”, adding: “And now you decide to abuse the state’s resources to scroll through my social media and use your connections to try to spin and attack me, an individual tax payer?”

His post has attracted over 200 comments thus far, with one calling the attack “a really low act from the Liberals”.

“This is the sort of bully boy tactics that Trump uses if anyone dare to speak against him,” wrote another.

Businessman Brenton GriGuol, who has similarly been a vocal opponent of the aggregation changes on social media, wrote: “Tim, you should be the poster boy for the Libs: come from nothing, worked your guts out and achieved. Suddenly it’s now a crime to achieve to SA.”

Former SA Liberal adviser Christian Kerr also chimed in with a pointed barb: “If some child in the State Administration Centre thinks that they’ve been a clever little spin doctor, God help this government.”

It does appear an odd quandary that the Libs have ended up in, where they are trawling the Facebook sites of their own supporters to play the class envy card against someone for building a successful business – which used to be the kind of thing the Marshall Government encouraged.

As one commentor on Goh’s article pointed out: “No decent Liberal suffers from tall poppy syndrome.”

Meanwhile, the Premier was out for the second successive day selling his new land tax plan to the mainstream media.

Having taken the odd gambit yesterday of appearing with Trevor Cooke – a major property developer whose company Commercial & General wasn’t affected by the aggregation changes in any case – Marshall today hit the hustings in Paradise with “Dom and Lyn”, the kind of ‘mum and dad’ investors who will benefit from the land tax rate reduction.

“This whole reform is designed to make SA more competitive, to put more money back in the pockets of ‘mum and dad’ investors.”

The Marshall land tax hard sell is clearly picking up pace – with radio ads spruiking its benefits hitting the airwaves today – after a somewhat shaky start wherein the word “commercial” was misspelt on a prominent social media flyer posted by the Premier’s account (bottom left). 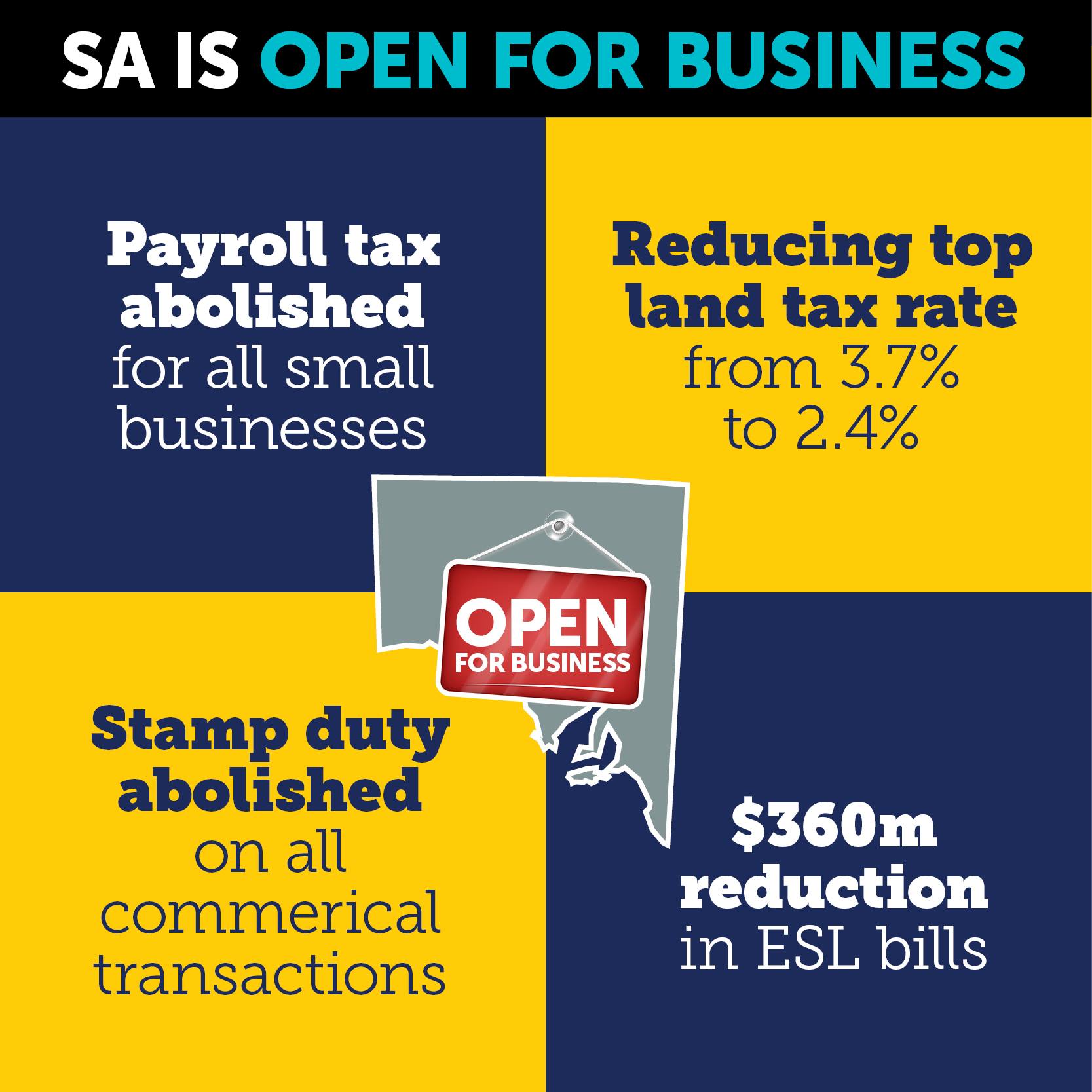 The error was helpfully pointed out by Michael Pratt, a former federal Liberal MP who has taken against the aggregation changes.

Pratt’s intervention helpfully illustrates the depth of feeling in the party, with the debate pitching Lib against Lib: indeed, his daughter Penny works for frontbencher Rachel Sanderson, whose seat of Adelaide contains many of the more vocal land tax discontents.

Cooke, who enthused about SA’s overall business competitiveness yesterday, was Chief of Staff for Iain Evans in the last Liberal Government, while his wife April currently works in the office of first-term MP Josh Teague.

On the other side of the ledger, Property Council boss Daniel Gannon and Master Builders spokesman Will Frogley have both come out strongly against the Government’s revised plan – and both are former staffers for Rob Lucas.

But there’s been less said about the spectre of another ex-Lucas adviser – former federal minister and Mayo MP Jamie Briggs is now a managing partner with financial consultants PwC, who were contracted by the Marshall Government to review Treasury’s modelling on the aggregation impost.

Needless to say, Treasury’s figures proved to be… way off.

Briggs says PwC doesn’t discuss its clients, but did point out that he kept himself entirely removed from the process to avoid any suggestions of a conflict.

No blood on the floor – yet

There could be plenty of conflict though at tomorrow’s Liberal state executive meeting – the first since last month’s AGM, which saw the conservative Right seize control of the party’s governing body.

The Right have since mooted using their numbers to remove well-regarded Pyne-aligned party Treasurer John Kain. However, it’s understood he’s set to remain in the position – for now, at least.

Senior sources have told InDaily that they would prefer an “orderly transition”. Moreover, with Liberal donations in flux after the land tax shemozzle, it doesn’t seem like a good time to be interfering in the administration of the party’s finances.