Retiring Liberal MP and Defence Minister Christopher Pyne is known to be a close political confidant of Premier Steven Marshall.

And with the clock ticking on Pyne’s political career, he is doing his best to use what remains of his influence in the Federal Government to help out his South Australian mate.

In a move which will annoy interstate Premiers, InDaily has learnt that Pyne is pushing for Marshall to be a senior Australian representative at a key defence industry event in the US, just before the likely date of the federal election and therefore an event that Pyne himself won’t attend.

The “Sea Air Space” exposition in Maryland, US, in early May, will be followed by the “G’Day USA US-Australian Dialogue on Defence Industries” in Washington DC on May 9.

The industry-focused version of the fluffy G’Day USA event held in Los Angeles in January – attended by Marshall this year – would be a chance for the Premier to push South Australia’s defence credentials and growing interests in the space industries.

Sea Air Space is badged as the largest maritime and naval aviation exposition in the US, with more than 12,000 attendees from the US Department of Defense, military commands and international delegations.  The following “G’Day USA” dialogue is being pushed by the Australian Government to industry as ” a high-level dialogue that promotes Australian capabilities and innovation in collaboration with US Department of Defense leadership and US defence industry executives”.

“The event will conclude with an evening networking reception at the Embassy of Australia,” the government says in its promotion of the event.

Obviously, Marshall’s attendance as a senior Australian representative would be a potentially huge opportunity for him to promote the state’s defence capabilities.

With a federal election due by May 18 at the latest, the timing of the US defence events is difficult for the Coalition.

If the election is held, as seems likely, on May 11 or 18, the Federal Government would be in the last frenetic days of a campaign and well into caretaker mode. By then, Pyne will be all but a featherduster, politically speaking.

A spokesperson for Marshall confirmed there had been discussions about the Premier attending at Pyne’s request, but she disputes suggestions made to InDaily that Marshall would be any sort of official representative of Australia.

“It has been discussed but, no, nothing has been confirmed or locked in at all,” she said.

She later added: “If he goes I understand that he will be one of the most senior individuals there, but it’s not accurate to say he is formally representing Australia.”

What’s the fastest way to get around the city? One of those ubiquitous Lime e-scooters, old-school treadly, private car, Uber or by foot?

City-based transport planning and engineering company, InfraPlan, decided to find out, conducting a mini-experiment with their staff this week – measuring not only travel time but the pleasure, or otherwise, of the journey.

InfraPlan’s director Gayle Buckby said she knows people often use their cars for short trips around the city, and she wondered if this was the best option.

Like many city workers, the company’s staff often go to meetings just a short distance from their Wyatt Street office, and they’re spoiled for choice about how they travel.

“We thought we’d put them all to a travel time and delay test and also gauge our moods at the end of the trip to see which mode is the most enjoyable,” she said.

For the experiment, five staff left the office at 12.15pm, with the aim of getting to a meeting at the Central Market – one kilometre away – by 12.30pm.

“We would have liked to include a tram or bus as well, but it didn’t really make sense for the short distance we had to cover – the walk to the stop and the wait for the bus or tram,” Buckby said.

Staff member Alicia was the first to arrive, at 12.22pm, by bicycle.

“Overall, riding a bike was ideal for this type of trip, however the experience could vary significantly if it had decided to rain or I was held up at more traffic signals.” 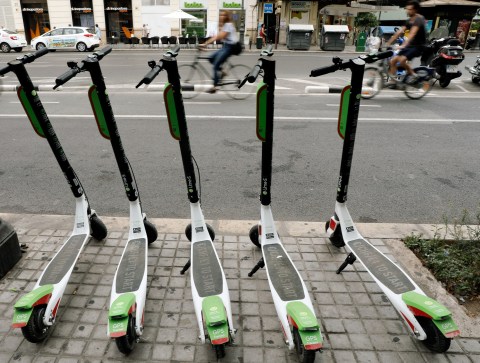 Lime scooters were slower than a bicycle, but quicker than other options. EPA image

Gayle arrived five minutes later, at 12.27, on a Lime scooter.

“The scooter was easy to locate with the app, and I found a good place to park in front of the destination… Overall it was fun and felt quicker than walking where the footpaths weren’t congested with people.”

“The walk was enjoyable through Victoria Square. It was a relatively easy walk, but I did have to stop at all the red lights which slowed me down.

“My mood on arrival was good, but just a bit frustrated by all of the delays at the red lights.”

James, who grabbed an Uber, arrived just in time for the meeting at 12.30.

“I had to wait 10 minutes for the Uber, even though the app estimated 2 minutes – the driver blamed his GPS and said he took a wrong turn. Once we got going, there were no real delays – I timed our stops at signals to be a total of one minute, 20 seconds. Being dropped off right at the meeting point was good, but I arrived feeling pretty frustrated because of the slow start.”

Last to arrive at 12.34, and most out of pocket due to parking fees, was Ben who drove his own car.

“My mood at the end of the journey was frustrated (to say the least!) as the whole journey took a lot longer than I thought it would. In the future I would not drive this journey and would seek more efficient ways to travel such as cycling, walking or scooting. The only way I would drive again is if I needed to take cargo to the meeting, but even then, a taxi or rideshare service would probably be preferable.

“I give my trip 1 out of 5 stars (half star for the efficient road network and half for being able to listen to the radio!)” 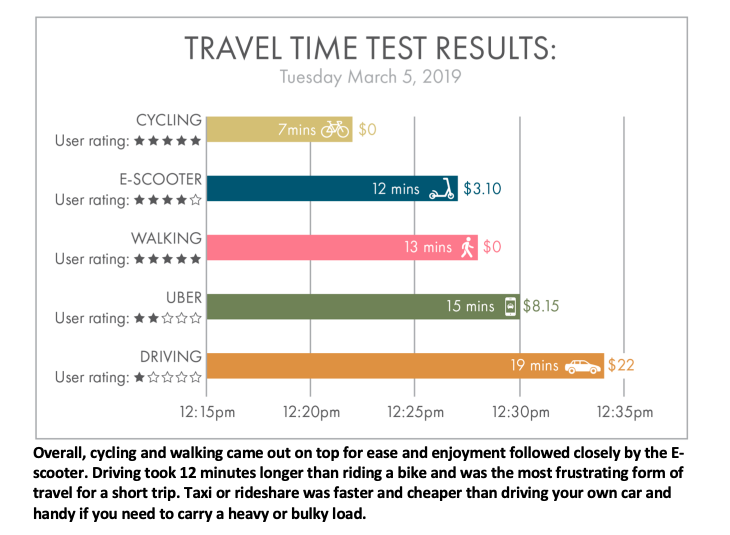 However, we’re told the staunch advocate of the event was kept busy at his London-based business advisory company, Rann Strategy Group, with the continuing disaster that is Brexit.

The former Australian High Commissioner to the UK did make an appearance on the Australian airwaves this week, being interviewed on Brexit by ABC radio’s AM current affairs program on Thursday.

Rann’s political analysis remains sharp. He told Sabra Lane there was no support for any proposition in the UK Parliament, including a push for a second referendum: the only move likely to get up was an extension of time.

Sure enough, overnight, the UK parliament did just that, rejecting a move for a second referendum and voting in favour of an extension of “Brexit Day” from March 29 to June 30, at the latest.