A sound rather like the rapid deceleration of a V8 supercar was emitted collectively by Adelaide’s political, business and media insiders in 2012, when the new broom of the Weatherill Government hacked at some of the taxpayer-funded largesse that had proliferated during the Rann years.

After what he described as a “tough budget”, then Treasurer Jack Snelling scrapped the state’s corporate suite at the Entertainment Centre and trimmed the state suite at the Clipsal 500 which had grown to become Adelaide’s biggest freebie fest. The 2011-12 mid-year budget review had already cut the government’s V8 guest list in half and replaced the state dinner with a more modest reception.

But could those days of relative austerity be coming to an end?

Some experienced observers of the V8 state suite noticed a much larger footprint for the taxpayer-funded corporate facilities at the rebranded Superloop 500 this year – the first for the Marshall Government.

We checked and, sure enough, the new State Government has made some “back to the future” changes and expanded the guest list – at least compared to last year.

While we weren’t given figures, the Government says the number of guests was “marginally up on last year for the Saturday and Sunday, mainly due to the increased focus on investment and because last year’s numbers were down partly due to the government being in caretaker mode”.

The suite also looks bigger because, instead of having a separate Premier’s suite and state suite as in recent years, the two facilities were reconsolidated.

It’s all about making sure the new Premier and ministers are able to mingle with the business community, says Minister for Trade, Tourism and Investment, David Ridgway.

“The consolidation of the two suites into one (by removing the Premier’s suite) was a concerted effort by the new Government to ensure the Premier and several Cabinet Ministers were able to meet and mix with key local, national and international business people and investors,’’ Ridgway told InDaily in a statement.

“We saw this as an important opportunity to promote the benefits of doing business in South Australia and we were only too happy to accommodate (Labor leader) Mr Malinauskas and one of his colleagues on the Sunday to extol the virtues of our wonderful state.”

[It’s okay Minister – we know that accepting hospitality at the V8 race has always been a bipartisan affair.]

For the record, here’s how the guest list worked:

The costs, the Government tells us, have not yet been consolidated.

Ambiguity about the Attorney

Adelaide’s polity remains remarkably relaxed about the possibility that the state’s Attorney-General Vickie Chapman breached the secrecy provisions of the ICAC Act.

Despite the tenor of some media coverage this week, we still don’t know whether Chapman breached the Act, albeit with SA Police deciding not to take any action after receiving advice from independent counsel engaged by the Director of Public Prosecutions to weigh the matter.

DPP Adam Kimber released a statement saying that the advice would not be released publicly because it was done for SAPOL.

“This is reason enough for me not to release the advice,” he said.

“However, in addition, release of the advice might encourage a breach of the Independent Commissioner Against Corruption Act 2012.”

Whatever could that last line mean, we wonder?

The Marshall Government’s key backers of the controversial Adelaide Oval hotel had some fun with radio FIVEaa this week with what they all believed was a  “gotcha” moment over Labor’s past support for handouts to private hotel projects.

The SMA’s proposed bolt-on hotel has received a $42 million loan from the Marshall Government without, apparently, going through any assessment process other than the minds of the state’s Cabinet members.

FIVEaa announced this week “exclusive” information that they said would change the debate: that Labor in Government had also granted millions of dollars worth of loans and grants to private hotel developments.

It named three developments that received Labor Government funding: the Sofitel Hotel in Currie Street, the Travelodge in Bentham Street, and the Barossa Weintal – the latter of which FIVEaa believed had received taxpayers’ money in secret.

But there were several problems with the critique: first, Labor’s largesse was the result of actual funding programs where applicants were competitively assessed against the Future Jobs Fund’s published criteria – in contrast to the Oval hotel which was Gillmanesque in its lack of process, as others have noted.

Another problem is that Labor’s grants were far from secret.

No less a shrinking violet than Leon Bignell announced the full list ahead of last year’s state election, via a media release judged so boring at the time that only the Barossa Herald appears to have picked it up.

Not only was the Barossa Weintal grant on the list, Bignell’s media person helpfully provided quotes from the CEO of the company that runs the hotel about how happy they were to get some Government dough (another twist is that the Weintal grant never went ahead, Labor says, due to the criteria eventually being too onerous for the applicant).

It can be tempting for journalists to file government media releases in the bin, but they can be useful to summon the ghosts of spin-doctors past.

Nevertheless, the episode has shed some new light on an important issue that has vexed many governments: when and how to decide to give private companies access to taxpayers’ money. It’s been a banana-skin for many administrations, including the current Federal Government. 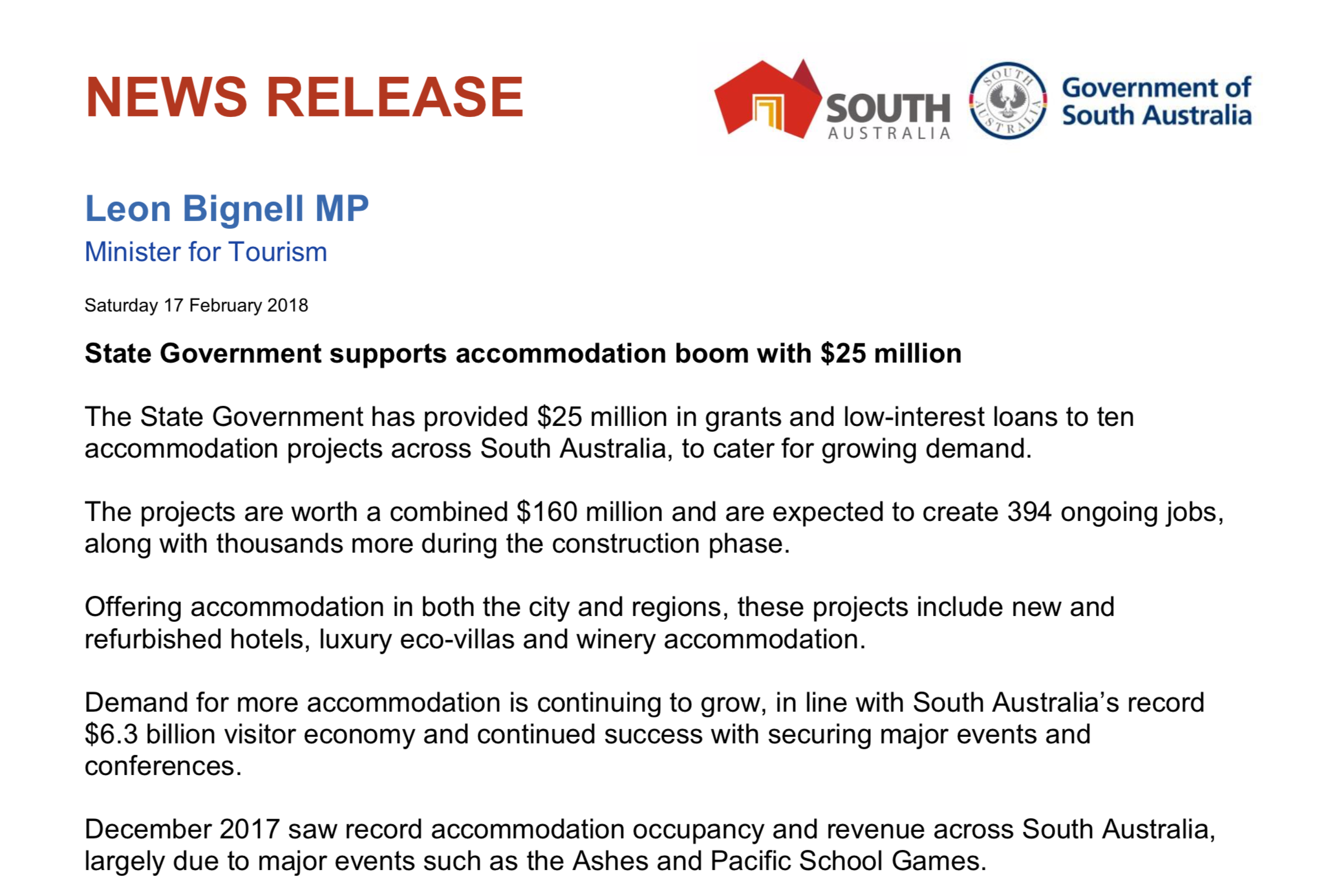 An extract from Leon Bignell’s secret media release. It did go out on the first Saturday of Fringe, to the chagrin of some in the Labor cabinet who wanted more publicity.