It sounds like a joke, but it’s definitely not funny given that the lives of vulnerable South Australians are stake.

The latest leaked document about the crisis-ridden public mental service in Adelaide’s south indicates that – at least as of late last year – not only was there little evidence that the service has a functioning leadership, but it also appeared to have no understanding of its purpose.

InDaily has seen a November 2017 report by consultant Denise Picton from Oztrain, based on interviews conducted with “senior staff of Southern Adelaide Mental Health Services”.

The document contains this astounding statement: “I was unable to gain a clear picture of whether there is a functioning executive team; the membership of that team; the purpose of that team; or its function.”

Unsurprisingly, the report recommends “a rethinking of this function”, with Picton hoping its mission would include: “The development of a purpose for the service.”

Curiously, when InDaily was researching stories on problems in the Southern Adelaide Local Health Network’s mental health service in September, SA Health refused to tell us the name of the clinician in charge. That reluctance, however, was likely to be more connected with SA Health’s steadfast refusal to discuss “HR issues” in the public realm – a rather convenient convention given the so many of the giant department’s problems appear to be connected to HR issues.

SA Health says they have acted on the Oztrain report.

“The recommendations from this exercise, which SALHN commissioned last year to further engage with clinicians, were acted upon and have also formed part of our ongoing mental health reforms,” a spokesperson said.

This week we reported on a leaked external review of SALHN’s mental health service at Noarlunga – conducted this year, well after the Oztrain report – which detailed a myriad of problems, including “sub-standard systems”, staffing shortages, poor planning and “fractured relationships” between clinical staff and management.

The mental health services at Noarlunga look after some of South Australia’s most vulnerable patients and runs a live-in service for people who are struggling to cope with day-to-day life. As we reported on Tuesday, poor planning means that there is “no regular psychiatrist” attached to the live-in service.

While here, he also made a trip to the Pentecostal megachurch founded by Andrew Evans – the man behind the now defunct Family First political party.

The Paradise Assemblies of God church, as it was once known, is now part of “Influencers Church Global” – an international church network run by Andrew Evans’ son Ashley and his wife Jane.

Morrison, Australia’s most prominent Pentecostal Christian, spoke to the gathering and the local pastor prayed for him, with Ashley apparently hooking in via a video link from his Influencers church in Atlanta, Georgia.

“Today we had the incredible honour of having the Prime Minister of Australia the honourable Scott Morrison worship with us at Influencers church,” Ashley posted on Facebook. “He loved it and was impacted. 2 Timothy 2:2 tells us to pray for our leaders so we can live peaceful lives. Our Prime Minister needs your prayers everyday.”

Curiously, the Influencers’ Sunday service is usually live-streamed – but not, apparently, for the Prime Minister’s appearance. 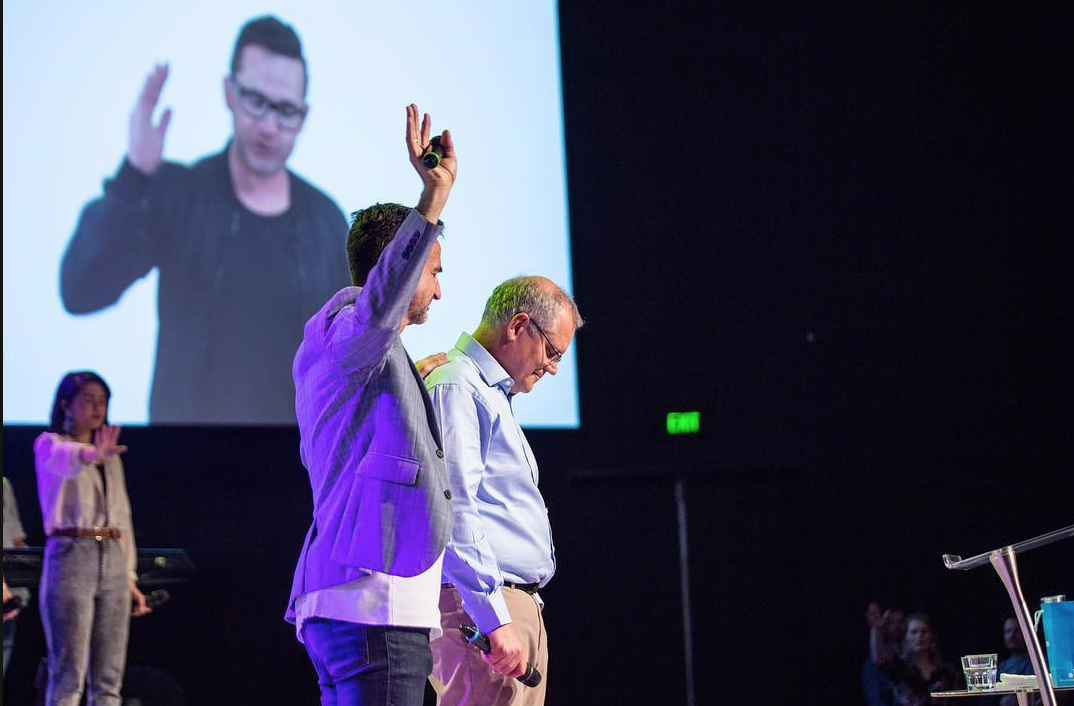 The Prime Minister at Adelaide’s Influencers church on Sunday.

The Paradise-based church network has a long history of support for conservative politics.

Andrew Evans launched Family First after retiring as the head pastor at Paradise, but the large, concentrated, congregations of the Pentecostal movement were clearly a key to his early electoral success.

Family First was swallowed up by Cory Bernardi’s Australian Conservatives last year, but Evans Sr continues to keep a close eye on politics.

This week, he urged his Facebook friends to pray for Morrison’s Liberal Party to win Saturday’s by-election in the Sydney seat of Wentworth.

At a city council election forum this week, Reverend Stephen Richardson from the Australian Spiritualist Centre asked area candidates what they would do to reduce the number of people sleeping rough in the park lands.

Incumbent area councillor Sandy Wilkinson placed blame on the State Government, arguing it was not the role of council to address homelessness.

“Council already does have programs in place for it,” he said.

“I’m not sure how many ratepayers really want their rates spent on a State Government issue like this.”

Wilkinson then took a swipe at the Reverend’s suggestion that the council could be doing more to reduce homelessness.

“We’re here to be in there helping but not like in that scene where Jesus was seen carrying a cross and saying ‘Could I help you’… going about with the crucifix on his back,” he said.

“We definitely don’t want that.”

Fellow incumbent area councillor Anne Moran said the number of homeless people in the park lands was an “absolutely unspeakable blight on our society”.

She said when she was a child she did not see any homeless people on the streets, nor the “mentally ill being left out in the cold and rain”.

“That’s because we had two world-class mental health hospitals – Hillcrest and Glenside – which have now been closed down and sold off by the Government,” Moran said.

But other area councillors argued the council did have a role in supporting the Government to eradicate homelessness.

Candidate Arman Abrahimzadeh, a prominent domestic violence activist whose mother was murdered by her estranged husband at the Adelaide Convention Centre eight years ago, said he had previously been forced to sleep in a car with his late mother and sister.

“I certainly know what it feels like to be in that situation,” he said.

“I think the Adelaide City Council can show some leadership and start some conversations.

“The National Homelessness Agreement was signed a little while ago, so I don’t see why we can’t work with the Federal Government to try and work something into that agreement.”

Fellow candidate and former Federal Greens Senator Robert Simms said he would advocate for the council to increase social and affordable housing stock in the city.