Which was the only locally-owned magazine that received advertising from the Adelaide Fashion Festival this year? South Australian Style.

Events SA, the government body connected with the SA Tourism Commission that oversees the fashion festival, says it manages potential conflicts of interest, but concedes that Kontos was part of an “initial discussion” about advertising partnerships.

“For all our events, a media brief is written by the marketing team for the Government master media agency, Wavemaker, based on the objectives of the event.

“The decision regarding media spend was made by the marketing team guided by recommendations from Wavemaker following their thorough evaluation of all proposals keeping in mind the reach and impact of each publication against the objectives of the event.

Of course, InDaily has some skin in this game. We take advertising, as do other publications owned by Solstice Media, which publishes InDaily.

The cost of campaigning

Prospect Mayor David O’Loughlin has had his beloved ute stolen while campaigning for re-election in Nailsworth.

O’Loughlin had ridden his bike to the suburb for a spot of doorknocking. He locked up the bike, but thieves broke into his pannier bag, took his keys and credit cards and, before he knew what had happened, they had travelled to his home and stolen his blue-grey, dual-cab Mitsubishi Triton ute.

They also had some fun with his credit cards for about half an hour until he cancelled them.

“We haven’t seen the cards or the ute since,” O’Loughlin told InDaily.

The Police are on the case but below are the details in case anyone sees it. 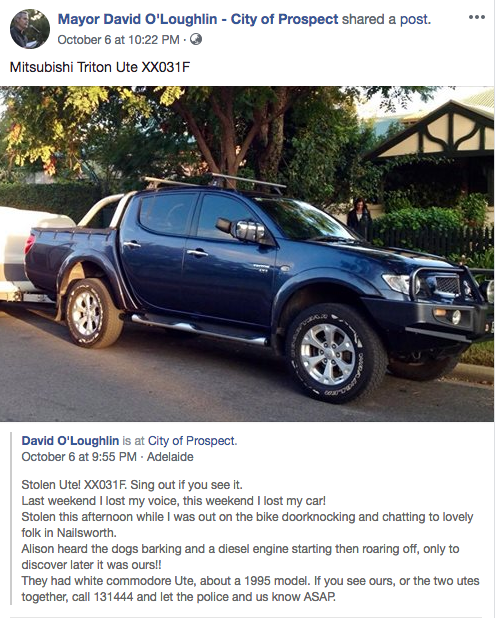 One of the state’s former top public servants, removed from her position as part of the Marshall Government’s new broom, is up for a key award for “innovation in public service”.

Dr Tahnya Donaghy, former deputy chief executive of the Department of Premier and Cabinet, is one of two finalists in the public sector category in this year’s Winnovation awards, which recognises South Australia’s most innovative women.

Donaghy has been nominated for her pioneering work on “nation-leading data sharing legislation” and the establishment of the State Government’s Office for Data Analytics “so that information can be shared across-government, within a safe and secure framework, to help vulnerable people”.

The award winners will be announced later this month.

Hancock arrives at the Bulletin via senior editorial roles at The Advertiser and Sunday Mail, the editorship of the NT News and, most recently, the deputy editorship of Brisbane’s Courier-Mail.

The campaigning editor-in-chief of The Australian, Paul Whittaker, will take charge of Sky News, to be replaced by Daily Telegraph editor Chris Dore.