“This is not the first time Gareth has flexed his vengeance on strong Liberal women. He doesn’t just get even, he annihilates anyone who opposes him.”

Sudmalis will quit Parliament at the next election, using parliamentary privilege to get stuck into Ward and announce she’d had enough of “NSW Liberal Party bullying, intimidation, leaking and undermining at a local level”. 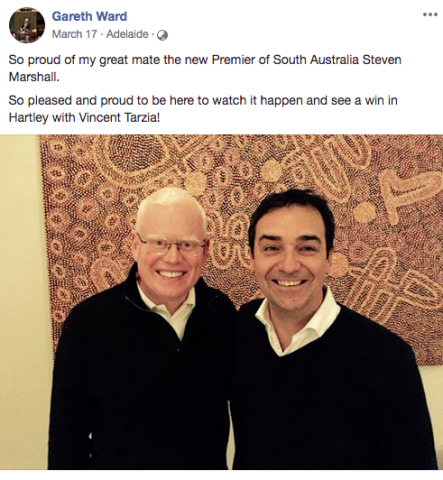 Ward rejected the claims and challenged Sudmalis to repeat the claims outside of parliament.

Ward’s inaugural speech to the NSW Parliament in 2011, in which he details a life-changing decision to join the Young Liberals at the age of 16, includes special thanks to Marshall and Stevens.

Ward helped with Marshall’s successful campaign in March, describing him as a “great mate”.

Hooper weaves a tale heavily featuring Stevens, a “tanned, handsome man”, and his “friend and confidante” Ward, with “a quick wit and a penchant for Turkish Delight”.

One of the most bizarre passages in the article – with some relevance after this week’s events – comes as Hooper recounts Ward’s contribution to a debate about ending Medicare-funded abortions.

Tip of the Spear

Meanwhile, Minchin’s wife Kerry Wakefield has a new project, which she describes as “a small centre-right news aggregator drawing on my recent experience with US media”.

The website – Tip of the Spear – pulls together news and opinion about “the political and cultural battle unfolding in the West”.

“The Leftist orthodoxy in Western culture means that much mainstream media is ill-suited to report accurately on centre-right movements and issues springing up in these turbulent times – think free speech, Trump, Brexit, nationalism vs globalism, immigration, the challenge of Islam, culture wars,” the website says.

“Why would the same media that told you Trump couldn’t, shouldn’t and wouldn’t win the US presidency, be any more accurate now? Here at Tip Of The Spear we want to offer you a centre-right perspective on current events taken largely from the last Western redoubt of free speech, the US, where debate is not hampered by censorship.”

Your columnist has been waiting for the wave of outrage over Channel Nine running a four-part series which literally describes Adelaide as “evil”.

City of Evil, based on the book of the same name by Advertiser court reporter Sean Fewster, goes to some lengths to insist that Adelaide isn’t the serial killer capital of the world. Definitely not. No way. Not true. Nope.

We are, however, apparently the capital of bizarre crimes, which are explored in some detail by the program. (Fewster has argued that  “burying our heads in the sand, ignorantly ‘defending Adelaide’s reputation’, does us as great a disservice as does propagating the ‘murder town’ myth”.)

He didn’t respond to several queries.

Social media appears to be devoid of outrage. Last year we all lost our minds when the Daily Telegraph suggested we were an economic basketcase. And we’ve been offended at far less.

What’s happened to us?

For the record, Adelaide is one of the safest cities in Australia and our homicide rate is consistently below the national rate.