In a forthright exchange on Twitter last week, McGregor called out Harris over a line in her review on arts website The Barefoot Review.

Harris, who was generally glowing about the gala, described McGregor as wearing a “strangely unflattering red outfit”.

McGregor pointed out she was wearing the costume in character (“a middle-aged mother with a penchant for pockets and gin”).

Hi @saline, this is a great review of our opening night gala but I’m curious to know why you felt the need to say my red jumpsuit (that I love btw) was ’strangely unflattering’? What’s the point of this comment? I’m glad you enjoyed the show but why you need to cut a girl down? https://t.co/Jyifryvw7z

In a lengthy exchange, Harris said costumes were fair game for criticism, later clarifying that she felt that the lighting was unflattering.

She said she would never want to cut McGregor down. “Love you to bits. Which is why I mentioned the jumpsuit.”

McGregor was having none of it.

Costumes are part of the show.

McGregor then wrote on Facebook: “I’m interested to hear your takes on the idea that a stranger telling you your outfit is ‘unflattering’ is actually a kind thing to do. From a close friend, done in a respectful way? Maybe. But as part of a review I don’t buy it. She says that costumes are part of a show. A theatre show with a costume designer maybe but when it’s just me wearing my own clothes? I body shame myself ALL THE TIME. I don’t need anyone else to do it for me. If I decided to not wear anything I thought was unflattering on me I would probably never leave the house. Ladies can we start being a bit kinder to each other and stop with the passive aggressive body shaming?”

The respected artistic director later noted that Harris had retracted the “unflattering” line from her review.

“UPDATE – it has been taken out of the review and a retraction posted at the bottom. Hopefully this is a win, she has seen the error of her ways and there is no hard feelings anywhere. It’s tough out there. Body shaming women has become such an ingrained part of our society that I don’t think most people even know they are doing it. I still make mistakes, we all do. EYES OPEN, right? x”

However, that was obviously not the end of the matter for Harris’s long-term friend, ABC radio presenter and fellow arts critic Peter Goers, who used his Sunday Mail column yesterday to criticise McGregor – including her costume choice at the gala. 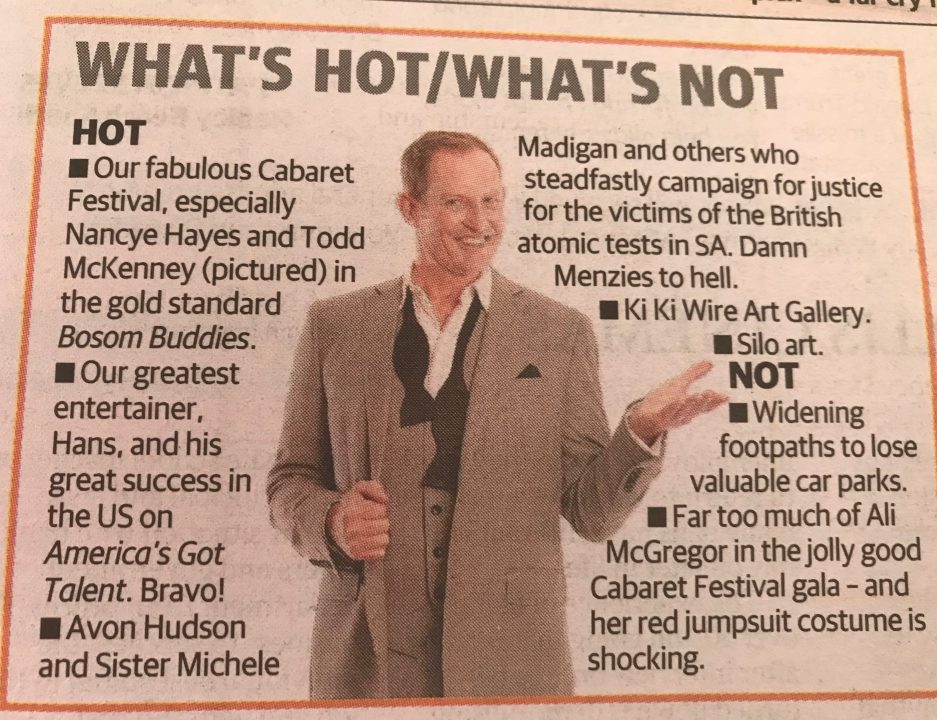 Harris told InDaily that she was only critiquing the costume and strenuously rejected any suggestion that she had engaged in body-shaming.

“I wasn’t body-shaming her for an instant – I’ve never done that in my life,” she said.

She said Goers’ comment wasn’t a defence of her, although she acknowledged the pair had discussed McGregor’s gala performance: “Peter makes his own points – he speaks for himself.”

McGregor’s showing at the gala also attracted criticism from reviewer David Finch at the Performing Arts Hub website. In fact, it’s one of the most scathing and personal criticisms of any festival director by a local critic in recent memory.

Australian Conservatives leader Cory Bernardi is in the midst of a push to raise campaign funds for the next federal election.

As part of the pitch for potential donors, the South Australian senator says that funds will go towards a “world-class smartphone app to empower our field campaign volunteers”.

He told InDaily the app was inspired by campaign techniques used successfully by the Liberal Party at the recent state election, but also by groups on the other side of the political ledger.

“It brings together our database and the ability for campaign teams to connect and coordinate with each other… it’s a way of having local campaign teams targeted towards particular sections of the community,” Bernardi said.

Bernardi says his party commissioned the app, which was “being built for us” by “local consultants” – whom he declined to name, adding it would “work with our existing data base”.

“We’ll be able to have our field operators out there garnering feedback and information,” he says.

“One of the most critical things is the coordination of volunteers… we’ve got to give them the tools that allow them to work cooperatively together.”

The timing seems conspicuous after the SA Liberal Party, which Bernardi quit last year to kickstart his new venture, ended 16 years of Opposition after buying into the US software i360 – backed by Republican-backing moguls the Koch Brothers – for which they paid a monthly service fee of around $20,000.

“I think there’s a number of examples of it,” Bernardi says.

“The state Liberals used a particular package, obviously quite effectively [but] we also know GetUp have been using some database technology, and the ‘No’ campaign for marriage [equality] did as well.

“We want to learn from others.”

Bernardi is coy about the cost of his own party’s proposed software, but concedes: “It’s pretty expensive.”

“I haven’t got the exact figures, but in the tens of thousands,” he says.

As for whether he’s on track to meet his $250,000 war-chest target by month’s end, Bernardi notes: “I’m cautiously optimistic – as I always am.”