The grand final parade wound its way through the city, with players and coaches from Richmond and Greater Western Sydney.

Tigers fans created a sea of yellow and black with their strong presence, including Dominic Longey, fiancee Alli and their three cubs from Warrnambool.

“I was eight when I saw my first grand final – my grandfather was a mad supporter so all the boys in our family are Tigers supporters,” Longey told AAP from the sidelines of the parade.

“It’s about being part of the Tiger army and just being involved in something that (the kids) may not see for another 25 years.”

Michael Mielczarek hopes his daughters don’t have to experience the same Tigers’ premiership drought which he’s lived through.

“Two years ago (when Richmond won the grand final) was a special dream, I’d been waiting 37 years so hopefully we get another,” he said.

Adelaide-based Giants supporter Damian Woodard said he was sure the underdogs would be victorious on Saturday.

“We’ll be at the game with family.”

What the Giants lack in rusted-on fans, they have made up for in the build-up to their maiden Grand Final with a viral media campaign, with the GWS club song permeating social media accounts via ingeniously tweaked mash-ups of popular culture memes under the hashtag #bigbigsound.

this GWS #bigbigsound meme is the greatest thing to happen all year pic.twitter.com/mDNdDyfwRE

The parade has been part of the game since 1977 and kicked off at the Old Treasury Building before wrapping up at the AFL Grand Final Live Site near the MCG in Yarra Park. 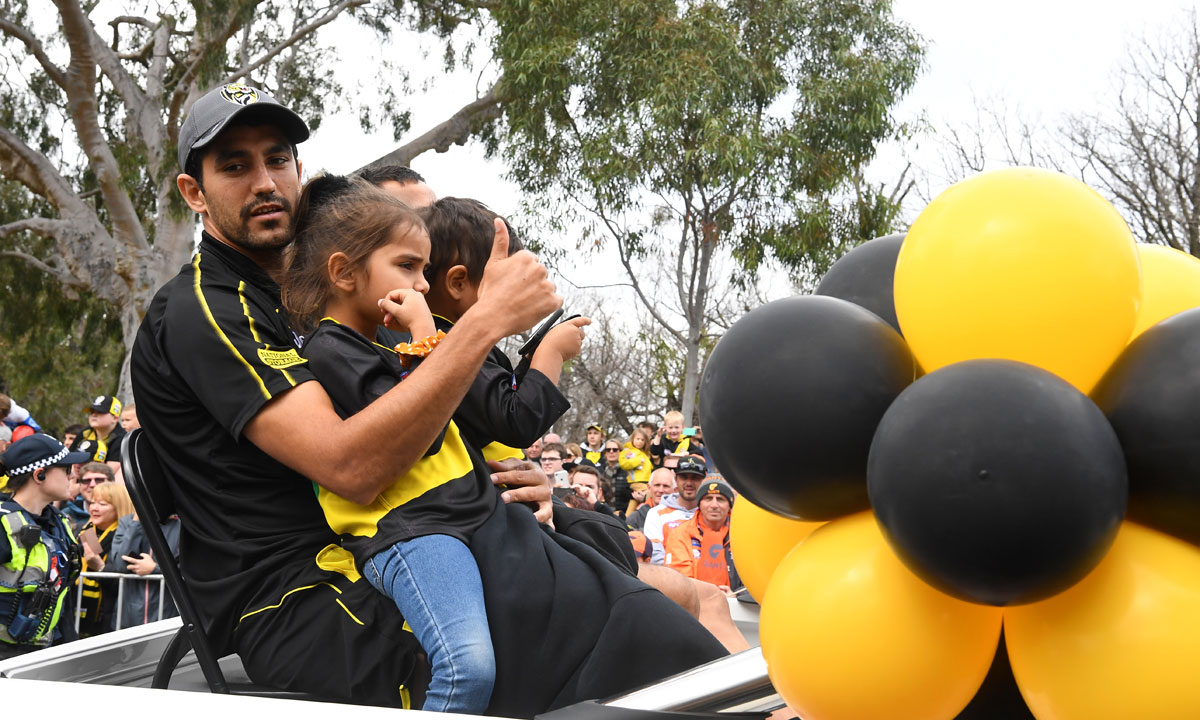 After training sessions this morning, Tigers coach Damien Hardwick and his Giants counterpart Leon Cameron rubber-stamped their sides for the MCG decider, with the Tigers confirming the debut of 27-year-old Marlion Pickett against a GWS outfit bolstered by the return of Toby Greene and Lachie Whitfield.

Hardwick said surprise debutant Pickett – the first player in 67 years to make a debut in a grand final – was ready-made to handle the heat of the grand final.

“We backed in our gut,” Hardwick said of the selection call.

“It’s a great story, a lot of people will tell you that. But the reality is this kid can play. So we’re really excited to give him the opportunity. He has worked incredibly hard to get that and he has played some really good footy along the way.”

Pickett, who spent 30 months in jail when younger for burglary offences, was plucked by the Tigers from the WA state league in the mid-season draft.

“He’s just unfazed,” Hardwick said. “Every challenge he has played at this year he has raised the bar.

“He has got some incredible ability to cover the ground, he uses the ball really well, he looks really composed, he’s hard and tough as well.

“He is 27 years of age and obviously he has had a couple of years out of the (AFL) system but he looks a ready-made AFL player.”

The Giants, in their first grand final in eight AFL seasons, trained this morning at the MCG.

“We understand that it’s an important occasion, a big deal, but we understand the basic fundamentals of football will take over tomorrow.”

Cameron predicted a grand final where winning contested ball would be king.

“We have built a brand in the last three or four years that we like contested football … but so do Richmond,” Cameron said.

“In finals footy you push the line in terms of attack of the footy … it’s just the basic fundamentals of the game.”

Richmond’s parochial supporter base converged on Punt Road Oval, where the squad trained before the grand final parade.

Thousands lined the streets, with the Richmond colours dominating, with the Tigers entering the decider on an 11-game winning streak.

But Hardwick played down favouritism and predicted a rugged battle against a Giants outfit buoyed by stirring away wins against Collingwood and Brisbane to reach the grand final. – AAP