Morrison was this afternoon elected leader of the Liberal Party, defeating Peter Dutton and Julie Bishop to become the Prime Minister of Australia.

Addressing his final press conference in the top job, Turnbull confirmed he will soon be leaving parliament, potentially threatening the Government’s slim majority in the House of Representatives.

“I will be leaving the parliament not before too long, as I have always said,” he told reporters.

Crossbencher Rebekha Sharkie said in a statement that she would be consulting with her Adelaide Hills electors to decide whether or not to give the Morrison Government her vote in the event of a no confidence motion when parliament returns on September 10.

“In 2016 I gave a verbal assurance to former Prime Minister Malcolm Turnbull that I would support him on issues of confidence and supply,” she said.

“Obviously the Liberal Party is going through a period of transition.

“I believe strongly in good governance and will be seeking feedback from my community regarding the issue of confidence for the new Prime Minister.”

Turnbull conceded he had had to make compromises as Prime Minister – a lesson he had learnt from his time as Opposition Leader – in order to keep the Liberal Party together, but said he was proud of the Government’s achievements under his leadership.

“What I have done, always, is to try to keep the party together,” he said.

“From time to time I have had to compromise and to make concessions.

“It’s something I learned from my first time as leader: you have to work so hard to keep the show together – that’s the bottom line.”

He said there had been a “determined insurgency” within the Liberal Party, backed by “powerful voices in the media”, aimed at toppling his prime ministership over the past week, and that the “insurgents” had not been rewarded.

“In the party room meeting today I was impressed by how many of my colleagues voted for loyalty above disloyalty (and) by how the insurgents were not rewarded, by electing Mr Dutton for example,” he said.

Morrison won the ballot 45 votes to Dutton’s 40, after former deputy Liberal Leader Julie Bishop was knocked out in a preliminary ballot. 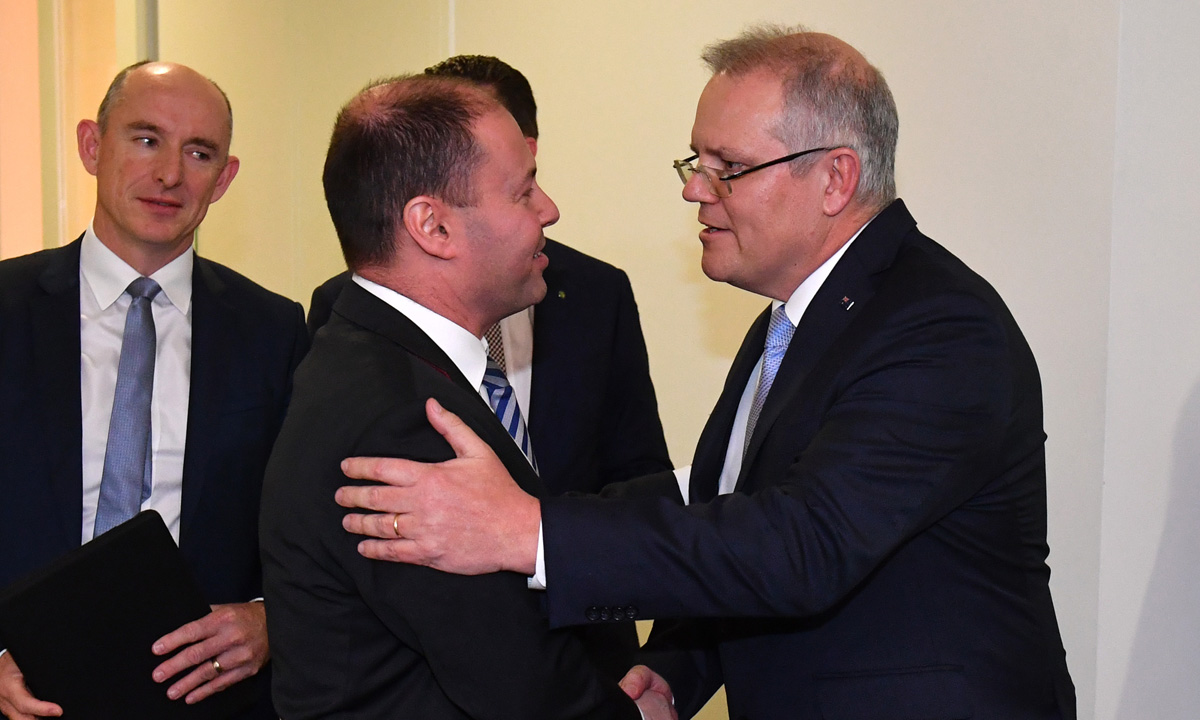 Speaking immediately after the party room meeting, Dutton thanked Turnbull for his service to Australia, and added that his job now was to “provide absolute loyalty to Scott Morrison to make sure that we win the election”.

Former Prime Minister and Dutton-backer Tony Abbott told reporters after the meeting: “We’ve lost a Prime Minister, but there’s still a government to save.”

Former Health Minister Greg Hunt said a line had been drawn under a decade of political instability.

“I think we have now a new generation and a next generation of leadership,” said Hunt.

“They’ll give Australia a real chance of success economically and socially.

“A line has been drawn under a decade.” 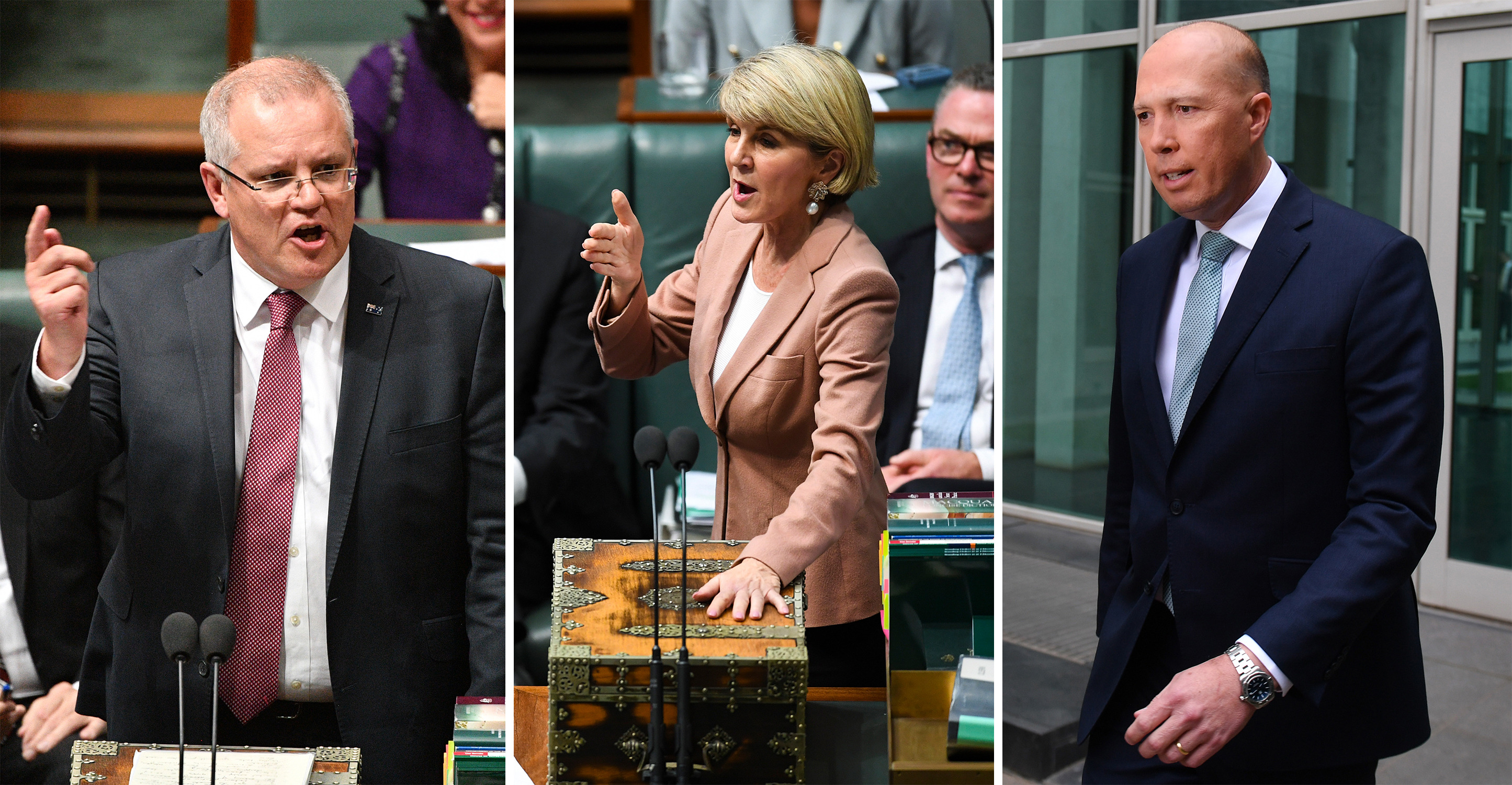 In a statement, SA Premier Steven Marshall congratulated Morrison and thanked Turnbull for his service.

“I congratulate Scott Morrison on being elected Leader of the Federal Liberal Party and becoming Prime Minister of Australia,” said Marshall.

“I look forward to the South Australian Government’s strong working relationship continuing with the Federal Government under Mr Morrison’s leadership as we seek to create more jobs, lower costs for households and businesses, and deliver high quality public services.

“On behalf of the Government of South Australia I thank Malcolm Turnbull for his service as Prime Minister.”

He said Turnbull had been “a strong supporter of South Australia and his leadership was pivotal in our state becoming the base for the Commonwealth’s $90 billion naval shipbuilding program”.

‘That program of work, combined with increased GST funding, funding for major infrastructure projects and increased funding for our schools and hospitals, has put South Australia in a much stronger position than we were under successive state and federal Labor governments.”

The spill motion in the party room triggered Turnbull’s resignation, but it was a near-run thing – 45 votes to 40. That effectively meant Turnbull was a mere three votes away from retaining the confidence of his party room.

Turnbull, who is set to quit the role and his Sydney seat of Wentworth, walked into the party room with Small Business minister Craig Laundy and Arthur Sinodinos, who returned to Canberra from sick leave, by his side.

Sinodinos has been on leave for months, receiving cancer treatment. 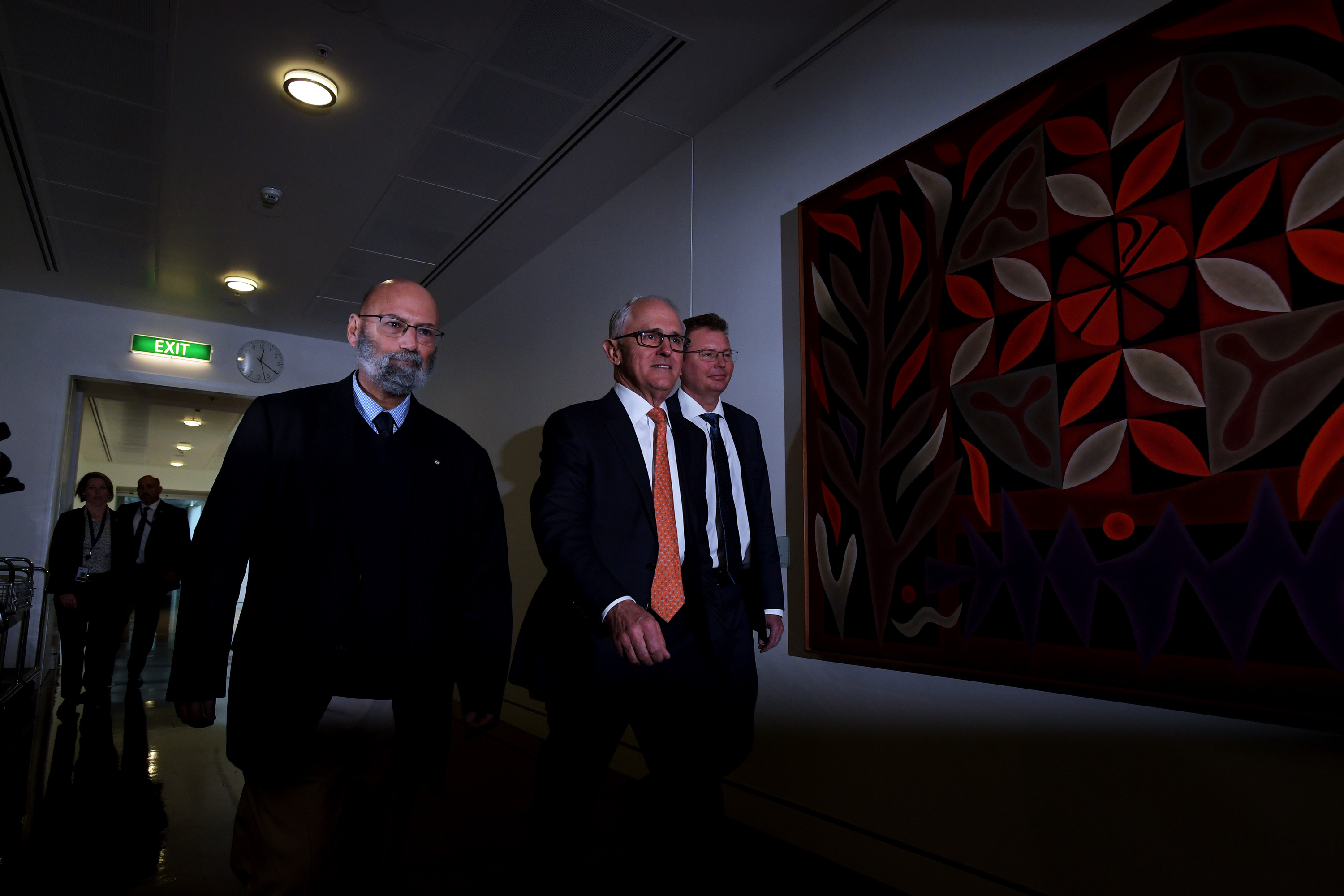 Bishop and Morrison walked into the meeting alone, while Mathias Cormann accompanied Dutton.

Dutton, who lost a spill on Tuesday 48 votes to 35, hand-delivered the letter to Turnbull on Friday morning.

Senior minister Christopher Pyne said the process had been a farce.

“I think some people of the caucus should have considered the greater good of the people of Australia and the government rather than their self-interested ambition,” he told reporters outside Parliament House.

The party room meeting played out after more drama overnight, as Dutton’s forces struggled to force the spill through a petition, with Turnbull demanding he be handed the signatures of a majority 43 members before he called it.

That majority was secured late this morning, with Turnbull handed the petition less than an hour before the warring factions met.

There had also been clouds over Dutton’s candidacy, with questions over whether he is eligible to sit in parliament over his financial interests in Commonwealth-funded childcare centres.

Advice from the solicitor-general Stephen Donaghue QC handed to Turnbull this morning found that on balance Dutton was likely clear to stay in parliament.

But the Solicitor-General found there is “some risk” the High Court would find Dutton has a conflict of interest over federal payments to the childcare centres.

“However, while that risk cannot be entirely discounted, it would remain necessary for the Court to identify an agreement in which Mr Dutton held that interest,” Donaghue said in legal advice released publicly.

“I am unable to identify such an agreement.

“I consider it unlikely that Mr Dutton is disqualified by reason of payments made to RHT Investments under the Inclusion Support Programme.”

Section 44 of the Constitution bans from parliament persons who have “any direct or indirect pecuniary interest with the public service of the Commonwealth”.

Donaghue says it will not be possible to reach a definitive conclusion without more detailed information.

Dutton said Donaghue’s advice backed up the previous legal opinions he had been given.

“The consistent and strong advice which I have received puts to rest the false, unsubstantiated and malicious claims regarding my eligibility,” he said in a statement.

“It is more likely that Peter Dutton is not disqualified, but this cannot be stated with certainty,” Professor Williams said.

“As the SG says, there is a risk he is in breach of section 44. Only the High Court can resolve this cloud of doubt.”

Turnbull had sought the solicitor-general’s advice before the meeting to ensure MPs knew Dutton was legally able to sit in parliament.

Before the meeting, senior Liberal Mathias Cormann said Dutton is the man to win back John Howard’s battlers and unite the fractured party.

“Peter Dutton connects very well to hard-working, aspirational Australians. I believe he will be able to reconnect with the Howard battlers – bring them back in the Liberal fold,” Cormann told Sky News.

“He knows what it takes to connect to families around Australia wanting to get ahead.”

Cormann, a close friend of Dutton, said the former home affairs minister was best equipped to unite the Liberals and win the next federal election.